U.S. Embassy in Afghanistan Narrowly Missed by Rocket on the Anniversary of 9/11 | 22 Words 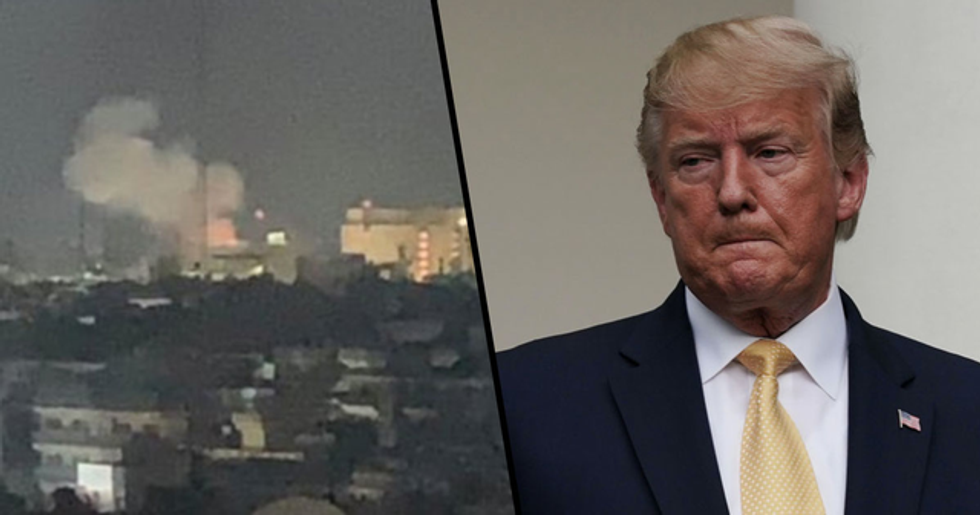 U.S. Embassy in Afghanistan Narrowly Missed by Rocket on the Anniversary of 9/11

In the first few minutes of the eighteenth anniversary of the 9/11 terrorist attacks, a rocket struck near to the U.S. Embassy in Kabul, Afghanistan, instead striking Afghanistan's defense ministry. Images of the smoke rising from the building, alongside warnings broadcast by the building officials have been shared online.

It's not yet known who launched the rocket and for what reason - though many are speculating that it's a response to Trump's ending of negotiations between the Taliban and the United States. Tensions have been high, with one U.S. service member being killed in a car bombing earlier this week. Although there were no fatalities in the rocket strike, many are fearful as to what it means for relations between the U.S. and the Taliban.

Eighteen years ago, one of the worst terrorist attacks hit New York City.

The world watched in horror as planes hit the Twin Towers.

Attacks were also carried out on the Pentagon. Another flight, United 93, was hijacked, but passengers fought back and managed to prevent it from reaching its destination.

It's believed that the attacks were the work of Afghani terrorist group, Al-Quaeda.

The group was led by Osama Bin-Laden. The U.S. believed that the Taliban were hiding the extremist in Afghanistan.

They responded with force.

More than 100,000 troops were sent to the country with the direct aim of finding Bin-Laden.

But, as with all wars, things weren't so straightforward.

It's believed that more than two thousand civilians have lost their lives as a result of the war between Afghanistan and the U.S.

Many believe that the war has dragged on too much.

Around 14,000 U.S. troops remain staged in Afghanistan to this day.

And one man finds the situation objectionable.

President Trump has voiced his displeasure at the current situation in Afghanistan, wanting the troops to be sent home.

Talks were scheduled to attempt to bring an end to the U.S. military's presence.

But they were abruptly canceled by Trump earlier this week. He cited one very specific reason.

Earlier this week, a U.S. Service member was killed with a car bomb.

The worker was killed at a NATO checkpoint in Afghanistan's capital, Kabul. The Taliban were blamed for the attack.

Talks were scheduled at Camp David in Maryland on Sunday.

But, after the car bombing, Trump abruptly canceled, calling negotiations between the U.S. and the Taliban "dead."

He said: "We had two ways to end the occupation in Afghanistan. One was jihad and fighting, the other was talks and negotiations."

"If Trump wants to stop talks, we will take the first way and they will soon regret it."

Tensions between the U.S. and the Taliban are at an all-time high.

And the latest development suggests that things are set to get worse.

Because there has been another violent attack.

Last night, an account live-tweeted as an explosion was heard in Kabul. Many were deeply fearful about the cause.

Images surfaced of the U.S. Embassy in Kabul with smoke pouring out. It's believed that it was the result of a near-miss with a rocket.

The attack was confirmed.

According to Gulf News, Nosrat Rahimi, a spokesman for the Afghan Ministry of the Interior said that the rocket missed the Embassy and hit the Afghan ministry for defense.

A spokesperson told Radio Free Europe: "We can confirm there was an explosion near the US Embassy in Kabul. US mission personnel were not directly impacted by this explosion."

The embassy building was still affected.

Loudspeakers within the embassy sounded, saying "an explosion caused by a rocket has occurred on the compound," says The Associated Press.

Luckily, there were no injuries.

A NATO spokesperson confirmed that there were no people injured in the attack - but this still leaves us with questions.

But many believe that this isn't a coincidence.

The timing of the attack, falling on the exact anniversary of what many cite as the beginning of the tension between the U.S. and the Taliban, suggests that there may be more to this story to come.