U.S. Navy Apologizes for the Pilot Who Drew This Hilariously Obscene Image in the Sky | 22 Words 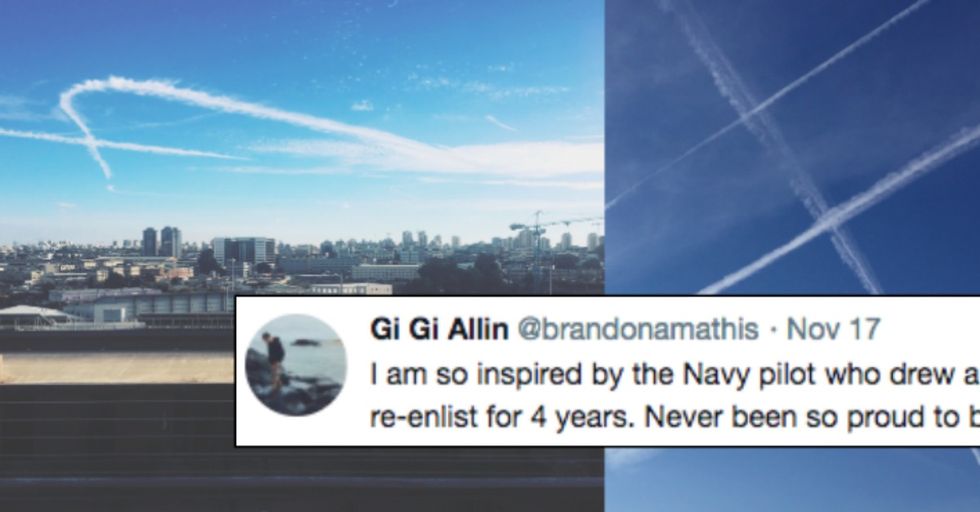 U.S. Navy Apologizes for the Pilot Who Drew This Hilariously Obscene Image in the Sky

Vandalism is bad. But sometimes, it is also kind of funny.

A U.S. Navy pilot performed an act of vandalism of sorts on Friday. We say of sorts because they didn't really draw on an object. They drew an obscene picture in the sky.

And the photos are larger than life.

Here is a prime example of bad but funny vandalism.

This vandal got creative as well.

We're not really sure how or why this drawing made its way to the back of this truck. But we think it's adding some much needed good vibes to that driver's morning commute.

Arguably the most hilarious vandalism story of all time plays out in the Netflix series American Vandal.

It's a fictional documentary that takes a deep dive into the lives of high school kids. One of them is accused of drawing male genitalia on teacher's cars, which kickstarts an in-depth, Making a Murderer-style investigation into each of their lives.

It's a heckin' delight.

We never thought that we'd say that an investigation into who drew obscene drawings on cars was funny... but there it is. The comedic timing is perfect, the writing is spot-on, and the acting is genius. This is not an ad. We're just hoping that if you're having a bad day, you're smart enough to take a break and enjoy this ridiculous documentary series.

The Way Back Boys would have loved this next story.

A U.S. Navy pilot flew over Okanogan County in Washington state on Friday and decided to give people something to talk about. Some people were upset after they looked up to see an obscene image drawn with jet trails...

A mother first reported the image to KREM2 news to complain.

She was offended by the image and didn't want to have to explain what it was to her children.Couldn't she just say it was a couple of scribbles made by a plane? After the picture made the local news, the navy actually admitted that one of their pilots was responsible.

They weren't proud of it.

"The Navy holds its aircrew to the highest standards and we find this absolutely unacceptable, of zero training value and we are holding the crew accountable," they told KREM 2 News. The Federal Aviation Association said that they would look investigate the incident, but that they couldn't do anything about it unless it posed a safety risk. It did not.

That question is a good one. We don't know if we'll ever answer that question, but the cultural masterpieces Superbad and American Vandal are a good starting point. Also, who's saying that the pilot was a man?

Well, this is awkward.

We're not sure what kind of punishment that navy pilot will face. But unfortunately, Stephen Miller's statement is probably accurate. Twitter user UberGuber had another take on this juxtaposition: "Everyone: stop showing people dicks they don’t want to see Navy: let’s draw a dick in the sky"

While some people were offended by the drawing, it seemed like most people thought it was harmless.

Twitter user @brandonamathis wrote, "I am so inspired by the Navy pilot who drew a dick in the sky that I decided to re-enlist for 4 years. Never been so proud to be in the Navy." Sarah Griffin said, "personally I think the Navy drawing a dick in the sky is one of the best things to happen to America in a while"