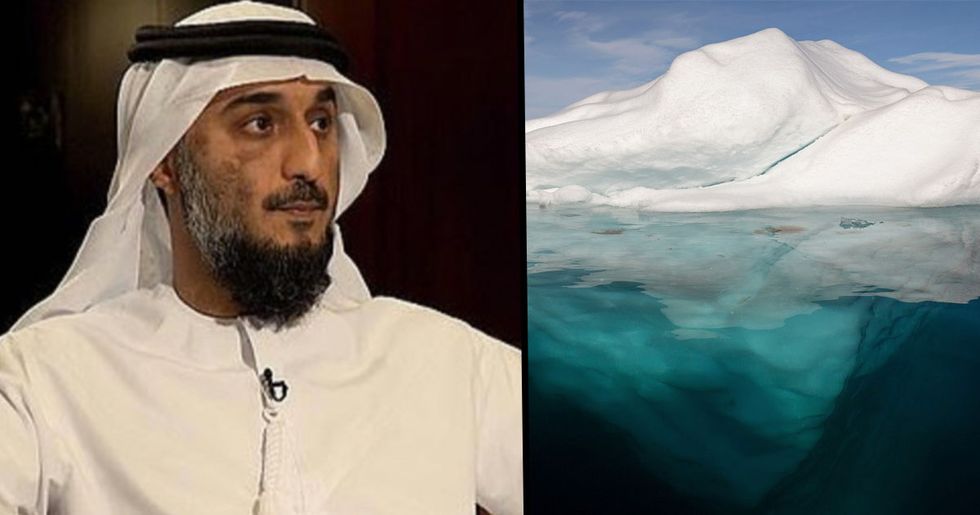 Yeah, you read that right. The managing director of National Advisor Bureau Ltd., Abdulla Alshehhi, is planning on towing an iceberg to Australia or South Africa as a test run to see if it would be possible to drag one to the  United Arab Emirates.

I never thought that I’d write something like that. At first, I thought that this guy was just doing something wacky to get in the news, but, as it turns out, there’s actually a pretty good reason that Alshehhi is making this move and it’s pretty great.

Keep reading to hear more about this crazy story.

“What would you do if you had all the money in the world?"

Most of us have been asked this at some time or another. Maybe it was phrased differently; maybe you were asked what would you do if you won the lottery or what you would buy if money just wasn’t an issue. Personally, I’d find having all that money pretty stressful and don’t think that I could hack the responsibility. Maybe I’d pay off my parent’s mortgage and get myself a house so I wouldn’t have to keep tunneling my wages into the hands of a greedy landlord, and, heck, maybe I’d take a vacation. Aside from that, I’m not sure.

One guy has a much more courageous plan for his large windfall.

Some might say courageous, others might say point-blank stupid. But I’d encourage you to hold off on making any judgments just yet, not until you have all the facts anyway.

Doesn’t moving an iceberg sort of sound like playing God?

That’s what I thought at first, but then, I guess, in this day and age, can we accuse anyone of doing that? It’s not exactly like we live in a natural world, with our highways, mall complexes, running tap water and the internet!

When Alexander Graham Bell invented the telephone, I’m sure that lots of people thought that the idea was ludicrous.

Or, at the very least, I’m sure that plenty of people were cautious about it; putting trust into the unknown takes a leap of faith, it takes gall. Change is scary.

I’ll put my hands up and admit that the idea of moving an iceberg from the Antarctic to UAE scares me.

It’s such a dramatic mission that it makes me feel as though we’re living in some kind of Disney movie, with us as the bad guys stealing the ice from these cute animated polar bears that didn’t do nothing to no one

In reality, though, UAE investor and entrepreneur, Abdulla Alshehhi, is no John Ratcliffe.

In fact, when you look into why Alshehhi is planning the transfer of the iceberg from the Antarctic to UAE, you’ll find that his intentions are actually environmentally sound.

The iceberg isn’t intended to be a peculiar kind of trophy.

The iceberg is going to be used as a source of water for the people of the UAE.

This iceberg could provide a million people with fresh water for five years.

According to the Daily Mail, if they were able to bring an iceberg that was 2km long and 500 meters wide, it would provide enough fresh water for a million people for five years.

How could it possibly be environmentally friendly?

The main investor in the project, Abdulla Alshehi, explained the much more severe environmental implications of the alternative plan t moving the iceberg: desalination.

What’s desalination when it’s at home?

Okay, time to put my science hat on... Desalination is the process of producing fresh drinking water from the sea by stripping the seawater of its salt content.

“That doesn’t sound that bad for the environment."

That’s what I thought! But I was wrong… Desalination requires pumping a huge amount of seawater to the gulf, and, in doing so, a lot of marine life is destroyed and a lot of fish are killed. Not so good of an option, right?

The world’s oceans are under the greatest threat in history.

According to Britsh natural broadcaster and historian, Sir David Attenborough, “It is now clear our actions are having a significant impact on the world’s oceans. [They] are under threat now as never before in human history. Many people believe the oceans have reached a crisis point."

So we should be looking into alternative ways of extracting water that won’t damage our oceans.

But moving icebergs? How environmentally friendly is that? Is it even feasible? Won’t the ice melt?

A test-run will be carried out.

A test run will be carried out later this year. This will involve dragging a chunk of Antarctic ice to either Cape Town in South Africa or Perth in Australia.

Make no mistake, this really is going to be a costly endeavor.

The test run alone is set to cost a cool $80 million.

The iceberg switcheroo isn’t just about getting access to freshwater.

Those running the project are also hoping that the iceberg will have an impact on the climate and bring rain clouds to UAE.

Having such a hot climate means that people get real thirsty.

The United Arab Emirates, a country built on desert land, has less than four inches of rainfall each year. Despite having no natural source of water, the country actually consumes more than double the global average of water.

Maybe an iceberg could solve all of the UAE's climate problems?

I’m sure that’s what Abdulla Alshehi and the rest of the team are hoping. I mean, if I was pumping billions and billions of dollars into a project like this, you can sure as heck bet that I wouldn’t be best pleased if the ice melted in transit.

A toast to the risk-takers!

Despite the controversy surrounding the project, I wish the team good luck. Who knows? Occasionally, something that sounds as absurd as dragging an iceberg across the Antarctic sea turns out to be the genius idea of the century. We’ll have to wait and see.