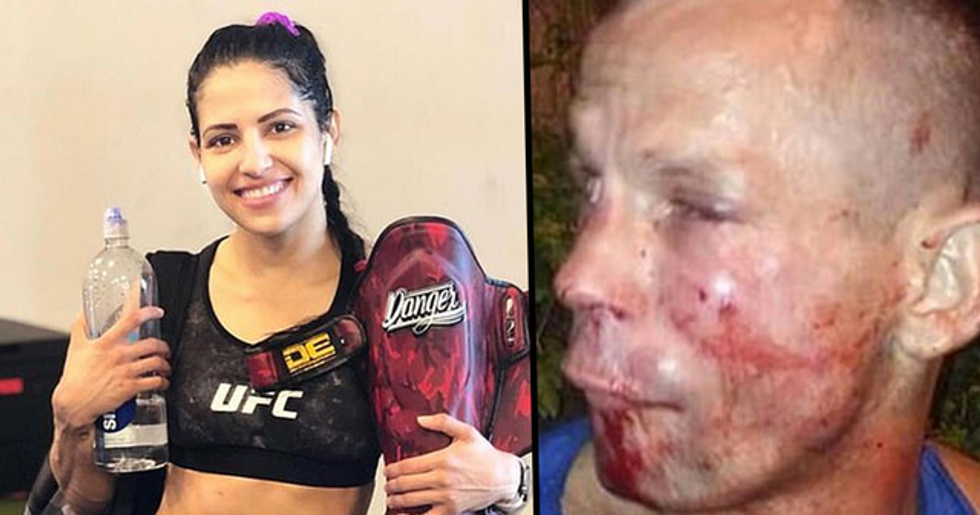 A robber picked on the wrong woman when he tried to steal from an ultimate fighting champion star in Rio de Janeiro, Brazil. The thief demanded athlete Polyana Viana hand over her phone, threatening her with what looked like a gun. Not one to be messed with, Viana threw punches, and captured the man in a choke hold. She managed to hold him until the police arrived to pick him up.

When they did, they were surprised to discover that the "gun" the robber has threatened her with was of the... homemade variety. The man had also only recently got out of jail for similar crimes. Viana thinks the man was scared when she turned on him - not surprising, when you consider her fighting prowess. The lesson to any would-be thieves out there? Don't judge a book by its cover!

You may already know what UFC is.

It stands for Ultimate Fighting Championship, and is the largest mix martial arts company in the world.

The fighting style is categorised by its minimal rules, plus lack of weight classes between competitors. It's supposed to help identify the most effective forms of martial art in terms of physical combat.

It has a reputation for being pretty hardcore.

UFC fighters are known for being some of the most skilled martial artists on the roster - basically, pretty scary guys.

Women can also get a piece of the action.

In fact, the UFC's decision to open up the contest to female fighters is cited as one of the main reason's for the growth of women's mixed martial arts fighting.

According to Sherdog's stats, she's won ten fights and only lost two - making her one tough lady.

This translates as "The Iron Lady." Put simply, she isn't someone you want to mess with.

Our story begins in a vary innocuous place.

Viana was waiting for an Uber in Jacarepagua, Rio de Janeiro - a scenario we've pretty much all been in before.

A man approached Viana as she waited.

He demanded she hand over her phone, and warned her that he was armed.

The thief obviously didn't know who Viana was.

Not to be messed with, instead of meekly handing over the phone, Viana lashed out and threw some serious punches.

Once she'd thrown him off guard, she used her UFC skills to capture the man in a chokehold to safely restrain him.

The robber is totally battered and bruised after his encounter with Viana.

The man's face is severely swollen, plus the impact appears to have broken the skin in a few places. That's what you get for messing with a professional fighter!

Viana managed to restrain the man until police arrived.

After he was apprehended, the police discovered the man had been arrested on similar charges before, and was only recently released.

It was Viana's quick thinking that kept her safe.

She described the incident to MMA junkie, saying "I thought 'If it's a gun, he won't have time to draw it.'"

Her well-practised moves meant she could safely and effectively stop the crime.

Recounting the incident, Viana said, "I stood up. I threw two punches and a kick. He fell, then I caught him in a rear-naked choke. Then I sat him down in the same place we were before and said, ‘Now we’ll wait for the police.’"

When the police arrived, they discovered something pretty surprising.

The "gun" the robber had used to threaten Viana? It was a homemade cardboard cut out.

Viana claimed she had suspected the gun may have been a fake, claiming it looked "too soft."

Here's another look at the robber's injuries.

It's clear the man had picked the wrong girl to try to steal a phone from!

You almost feel sorry for the guy. Well, until you remember that he brought the whole thing on himself.

Anyone who's part of the UFC is pretty much a badass.

We're guessing if he knew about Viana's mixed martial arts skills the robber might have picked a different victim.

So this piece of trash decides he's so pathetic he's going to threaten a woman and steal her phone. Thing is... tha… https://t.co/wGI9rpwxEo
— Giovanni Campea (@Giovanni Campea)1546834804.0

It is quite a delightful tale of instant karma. The man who was expecting to cause damage was actually the one who ended up battered and bruised.

It's clear Viana was the wrong opponent for him to choose.

So this piece of trash decides he's so pathetic he's going to threaten a woman and steal her phone. Thing is... tha… https://t.co/wGI9rpwxEo
— Giovanni Campea (@Giovanni Campea)1546834804.0

He probably had no idea what he was getting in to, as he picked on the misleadingly easy-looking target.

Even celebrities got in on the story.

You should never mug people! You should especially never mug women!! And definitely make sure you never ever mug a… https://t.co/ijpTBFanjS
— Perez (@Perez)1546908003.0

Perez Hilton tweeted about the incident, pointing out that no one deserves to get mugged, but that Viana was a particularly poorly chosen victim.

Others commented that women in general are surprisingly tough.

Although we suspect that Viana probably has slightly better skills and techniques for restraining a grown man in a chokehold.

Polyana Viana, you're an inspiration.

We particularly love that she only used the violence necessary to stop the crime and restrain the man until police arrived. Vigilante justice at its finest!

It is pretty funny.

Although we don't wish permanent damage on the robber, we do hope that this will have taught him a valuable lesson.

We're guessing the robber spotted Viana looking more like this.

Outside of her UFC work, Viana looks like any ordinary non-athlete. The robber probably though she'd be an easy target because of her appearance.

Little did he know...

We think if he'd seen her as her alter-ego, Dama de Ferro, he wouldn't have been so quick to attempt to steal her phone.

What a truly beautiful story.

Imagining the robber's realisation that he'd picked a fight with one of UFC's most dominating competitors is, frankly, delicious.

Let this be a lesson to any wannabe-robbers.

You may wish to reconsider your choices - because you never know when you might accidentally try to rob one of Brazil's most dangerous women.