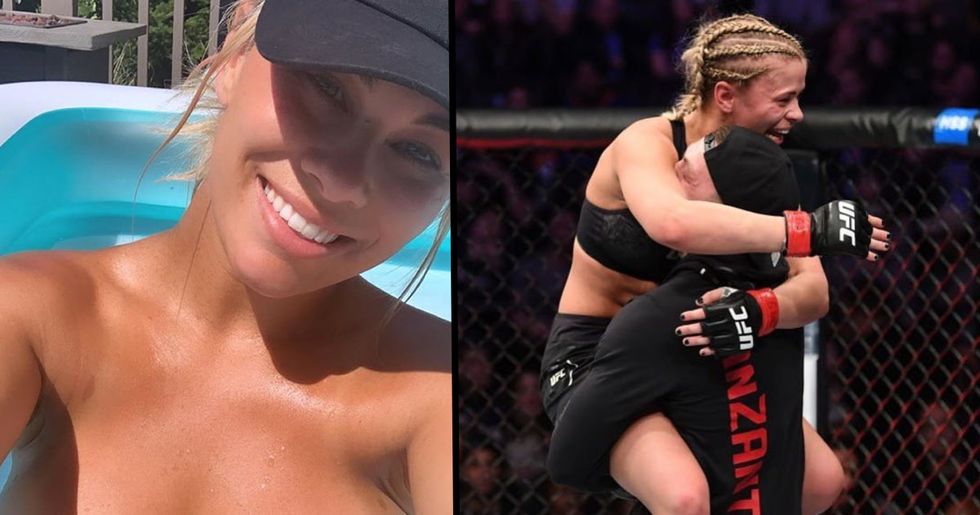 UFC Star Earns More from Posting on Instagram Than Fighting

In the world of modern technology, people have made careers for themselves from their very own bedrooms by simply tapping on a social media app.

But who would have thought that someone can earn more money by posting on Instagram than they could being a professional UFC champion?

This is now the reality for UFC star, Paige VanZant, so keep scrolling to learn how, exactly, this is possible...

Being a UFC fighter isn't the easiest career choice.

It takes a ton of strength, resilience, and, most importantly, bravery.

A UFC fighter must be able to take a hit...

UFC involves Mixed Martial Arts (MMA) and the fights follow the unified rules of MMA which, it has to be said, don't rule out that much.

The injuries have been pretty horrific...

Many UFC fighters have been sent straight to hospital following a fight. Mike Perry is probably up there as the owner of one of the worst injuries inflicted during a fight, in which his nose was so badly broken that it shifted completely across his face.

It's no wonder that UFC fighters get paid so much!

There's no denying that UFC fighting is a brutal sport to be a part of, but the fighters who take part are truly passionate about what they do and, just like any other sport, it's all about the good old fashioned competition.

So, when it comes to male and female UFC fighters...

You would expect fighters to receive equal pay, right? - the women in UFC are just as badass as their male peers - but this sadly isn't always the case.

Paige VanZant is one of the most popular female fighters...

The twenty-five-year-old won her first amateur fight at the age of eighteen, which encouraged her to take her martial art training to a professional level.

She has made a name for herself over the years...

Since becoming a professional, Paige has won 8 of her twelve MMA bouts.

She has taken this year out of action, however...

This was after she broke her arm during the opening round of her flyweight debut against Jessica Rose Clark, but, in typical MMA fighter mentality, Paige is eager to get back into her fitness and fighting. But her presence in UFC isn't the only reason that she is so famous...

The fighter is also a model and an author...

Alongside modeling for sporting brands such as Nike and Columbia Sportswear, Paige wrote a biography titled Rise: Surviving the Fight of My Life, which documents her rise to fame through UFC and personal battles that she has struggled with over the years.

Her Instagram is full of modeling and promotional shots...

Paige is in pretty amazing shape, and she isn't afraid to show this off.

And, it has to be said, they are a pretty cute couple...

The channel is named A Kick-Ass Love Story: With Paige and Austin, and it vlogs the ins and outs of the married couple's lives as professional MMA fighters.

And it looks like it's not just her fighting that's kept her famous...

Paige has recently hit out at organizers of UFC for the lack of equal pay between male and female fighters.

The Sun reported that Paige is so fed up with the money offered by UFC that she has run her contract down to become a free agent to see what her value is.

Paige was quick to point out that she was the main event twice in UFC...

Paige said: "I make way more money sitting at home, posting pictures on Instagram than I do fighting."

She wasn't afraid to voice her opinion...

"When I did my contract negotiation the last time, the talk was, 'I can’t pay you more than a female champion,'" she went on to say. "Okay, but why are you comparing me to just women? All of us should be getting paid more in general."

Paige isn't the only female fighter to speak out about her rights...

UFC champion, Ronda Rousey, has previously spoken out over these issues, and she said in a 2015 conference: "I think that how much you get paid should have something to do with how much you bring in. I’m the highest-paid fighter not because Dana and Lorenzo wanted to do something nice for the ladies. They do it because I bring in the highest numbers. Because I make them the most money. So I think the money that they make should be proportionate to the money they bring in."

Paige has worked equally as hard as her male peers over the years...

"I want a significant pay raise, to be completely honest. I’ve just been extremely accomplished outside of the UFC, as well as inside of the UFC," Paige continued to say in her defense. "Five wins in the UFC, four finishes, I’ve been the main event twice, and I think someone with those accolades should be paid more."

It has been argued that UFC and MMA fighters are paid depending on how many fights they have fought, how popular they are, and if they've had the chance to negotiate a new deal past their first contract. It's no secret that there are more male fighters out there than female, but should this be a reason to pay the men more?

Equal pay should be no question.

No matter a fighter's popularity, they are doing the same job as their fellow fighters. Paige and Ronda have done the right thing by speaking out about what they deserve, and we can only hope that these women will finally be granted the pay rise that they deserve. Keep scrolling to learn about Snoop Dog's issue with the pay gap in athletics.