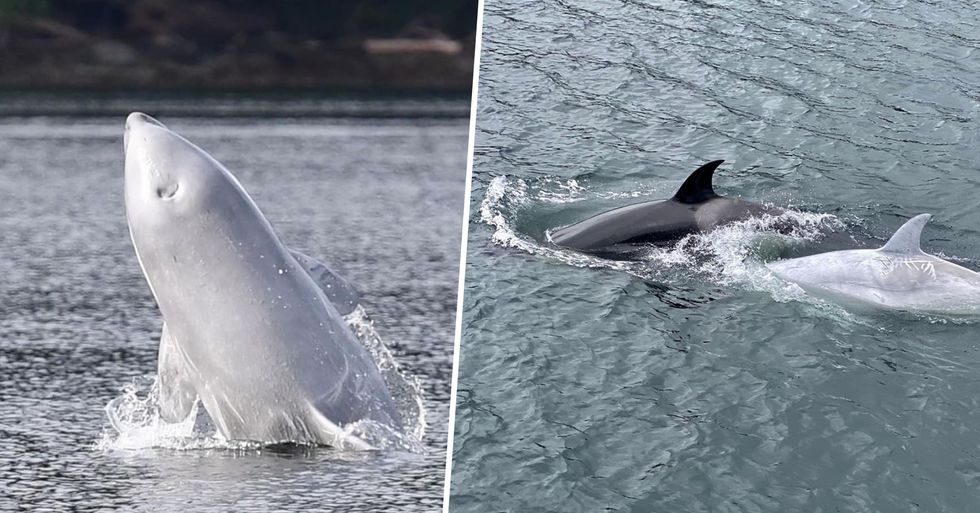 Ultra-Rare White Killer Whale Spotted Off the Coast of Alaska

An ultra-rare white killer whale has recently been spotted off the coast of Alaska and it is truly the most beautiful sight...

This footage is incredible...

If this doesn't prove how beautiful these creatures really are...

Then we don't know what will.

There's nothing better than seeing these whales thrive in the wild...

But what about when a super rare killer whale is spotted?

Well, this is exactly what happened recently in Alaska.

An incredibly rare white killer whale was spotted along the coast of Alaska and people have been left overjoyed by this glorious sighting.

The unusual killer whale was spotted with 2 other adults near the Kuiu and Kupreanof Islands, off the west of Petersburg, Alaska on August 7th.

He has been named Tl'uk, which is the Coast Salish word for "moon" on account of his incredible white/grey coloring.

The spectacular sight was witnessed by some extremely lucky whale watchers out on a charter boat organized by Alaska Sea Adventures.

The owner Dennis Rogers said that Tl'uk's color makes him easier to spot, even when he goes under the water. Speaking to local radio station KFSK, Rogers explained, "When [orcas go] underwater, usually they disappear and typically are very hard to follow. But having a white one under the water, you could see him an easy ten feet below the surface, this big white shape moving along there."

Also aboard the boat was marine biologist Stephanie Hayes, who said that there are only around 5 white killer whales to be predicted in the world.

After capturing the amazing footage, she explained: "I saw kind of a glow under the water and I'm thinking, wow that's an awfully white killer whale, that's doing something funny. And no, it was just genuinely the white killer whale. And it popped up and you could hear an audible gasp from everybody on the bow, going 'oh my gosh what are we seeing here?'."

As well as being all-white, the rare whale also has some very easily distinguishable markings that make him pretty easy to identify when spotted...

And even though he's been given the name Tl'uk, his official name is T46-B1B.

Because of his unique appearance, however, the whale is at a much higher risk than his peers.

Being a different color could potentially present challenges for Tl'uk, but - according to the experts aboard the boat, anyway - he's doing great!

"He looked like a healthy member of the pod and was successfully hunting seals, which is excellent," she explained.

And keep on scrolling to read about the bill that Canada passed to ban the captivity of dolphins and whales...