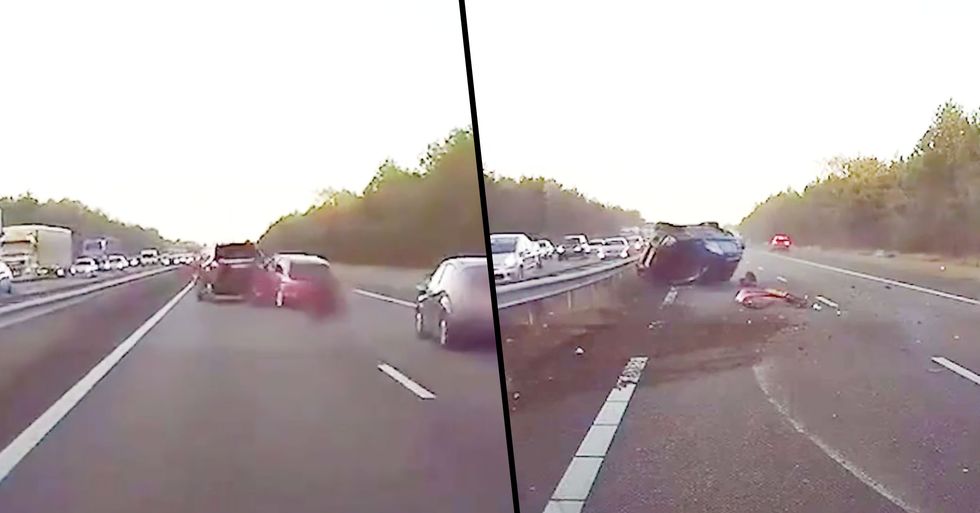 Unbelievable footage has emerged of a Tesla vehicle predicting an accident and reacting before it even happened, preventing a roadside disaster.

Keep scrolling to check out the impressive footage...

Tesla is known for its state of the art engineering...

And the company has unveiled some very impressive vehicles during Musk's time as CEO.

But Tesla had a little bit of an accident last year...

The general design of the Tesla Cybertruck raised some eyebrows...

Admittedly, the cyber-esque design did look like something out of an early PC game.

As the founder and CEO of Tesla, Musk was getting a lot of criticism for the bizarre car design.

Not that Musk seemed to care, however.

Frankly, this guy is so rich he can do whatever he very well wants to!

Musk is certainly a man who knows what he's doing...

He certainly wasn't finished with the Cybertruck...

The design has been highly-anticipated...

The Roadster, an all-electric 4-seater machine that Tesla claims has a top speed exceeding 250mph, was revealed last year, but the firm has now shown it in public for the first time at the Swiss event, although the white model on display appeared to be a design shell.

Tesla says the launch version, first confirmed during the launch event for the new Tesla Semi lorry in California,  will feature 10,000nm of torque (7376lb ft) from 3 motors. It can hit 60mph in 1.9 seconds, half-a-second quicker than the current fastest-accelerating Tesla, the Model S P100D.

He is no stranger to a fast car...

Musk said the successor to Tesla’s first production car, which went off sale 6 years ago, can accelerate from zero to 100mph in 4.2 seconds and complete a quarter-mile sprint in 8.9 seconds.

Who doesn't love a fast car?

But at the end of the day, speed isn't everything when it comes to a safe vehicle.

Tesla prides themselves on the safety of their vehicles.

There's nothing more important than driving a car that is safe and reliable, and recent footage certainly proves that Tesla is guaranteed to provide this with their cars.

The footage in question comes from a dashcam secured on a Tesla vehicle in the Netherlands back in 2016.

It shows the car driving along the A-12 highway behind a long line of fast-moving cars.

The 2 cars in front of the Tesla are seen to drive dangerously close to one another when the worst possible thing happens...

They collide into one another, causing one to go crashing onto the other side of the road.

The bigger car flips over onto its back...

As the other car veers onto the edge of the road.

Thankfully, no other cars are involved in the accident...

But it's arguable that Tesla's autopilot automobile innovation feature can be thanked for this.

Before the accident even happens, the Tesla's forward collision warning and emergency breaks kick in...

And the car can be seen slowing down considerably as it approaches the 2 colliding vehicles.

The Tesla slows down a full second before the collision took place...

Demonstrating not only the state of the art technology built in these cars, but also the safety priorities they hold.

If the Tesla vehicle wasn't equipped with this technology...

This 2 car pile-up would have turned into a 3 car pile-up - ultimately endangering more lives.

And make sure to keep scrolling for the most recent news on Elon Musk's baby...