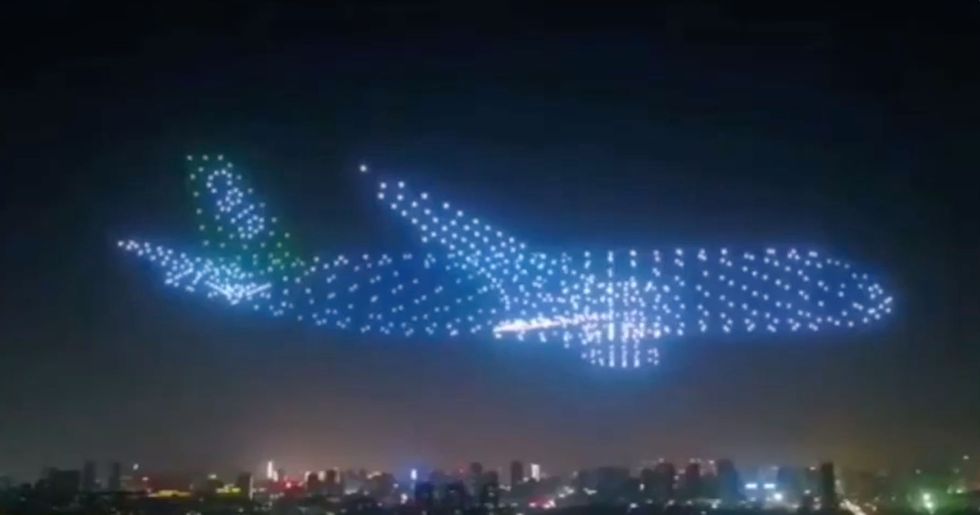 There's nothing quite like watching the sky light up.

There's something truly magical about watching colors and shapes swirl around the night's sky.

In 2019 it's not just fireworks that are causing people to gaze up in awe...

Drone light shows are the new hot thing on the market.

Scroll on to see the spectacular ghost planes at the latest Chinese Air Show, as well as some other fantastic examples of drone pyrotechnics.

The future is here.

Drone light shows really do feel like some kind of futuristic leap...

The dawn of drones.

Since drone technology became more mainstream, questions of what uses this tech could have has led to a multitude of different experiments.

To carrying humans in hammocks... Drones have been tried and tested with it all.

Lighting up the sky makes sense.

One of the highlights of drones is they can get really high in the air, right? The other highlight is that you can control them...

China has been at the forefront of this trend.

Taking hundreds of drones, coordinating them to make spectacular shapes, and lighting up the night's sky, has become very popular in China.

Vegas has also been a major player.

Vegas is famous for its indulgent firework displays, and of late, it has been opting for drone light shows.

The appeal of drone light shows is obvious... Even the most talented pyrotechnic would struggle to make such concise shapes and designs using fireworks. Programmed drones can make firework-like effects with tailored designs for any particular show.

Messages in the night's sky.

There's something truly magical about drone light shows and the intricate designs they can achieve.

Each individual drone is lit up and co-ordinated to follow a pre-planned formation route. Naturally, the more drones at your disposal, the more impressive the shows will be. I mean I'm not sure how impressive a show with a dozen drones could be...

A replacement for fireworks?

It seems like these large squadrons of coordinated drones showing spectacular aerial light shows could be the 21st-… https://t.co/lZExpo3eMC
— Ed Ellett (@Ed Ellett)1574053701.0

Perhaps we are entering into a new era of light show spectacles.

Could they ever replace fireworks?

As spectacular as light drone shows are, they require meticulous planning and are not quite the same as traditional fireworks.

It's hard not to be impressed with the high level of accuracy and intricate planning involved in making a drone light show come to life.

The 3D designs are astonishing.

This Chinese dragon required over five hundred drones to come to life.

Flying through the air.

Synchronized drones can work in a way that makes shapes come to life... The wings of this eagle flapped and the beast soared across the night sky.

As well as being able to create intricate giant formation shapes the drones can also split off creating separate shapes.

The possibilities are endless...

In ten years' time, who knows how far light drone shows will have come and how accessible they will be to witness!

At the Flight Convention in Nanchang, China, 800 drones flew in formation creating spectacular flight-related designs in the night's sky.

It truly is remarkable, isn't it? Continue scrolling to read all about the hawks stealing people's drones...