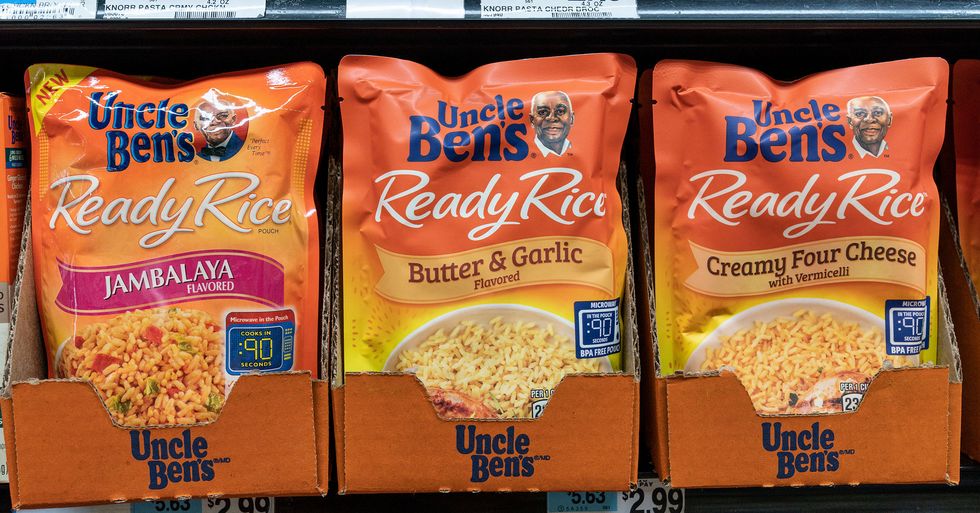 Famous rice brand Uncle Ben's have unveiled their new name and logo after they vowed to change it following an intense social media backlash...

Numerous large companies have been forced to change their branding after accusations of racism...

And the most recent one is Uncle Ben's Rice.

The Black Lives Matter movement has taken over the world...

Hundreds of thousands of people have been taking to the streets in the United Kingdom, Germany, Spain, Canada, Australia and New Zealand.

And people are continuing to demand justice. But some horrifying things have been emerging from our country's past...

Many huge names have been boycotted after accusations of racism have risen against them...

@KelloggsUK, as you are yet to reply to my email - Coco Pops and Rice Krispies have the same compòsition (except fo… https://t.co/CDQRT8j6vc
— Fiona Onasanya (@Fiona Onasanya)1592236364.0

Aunt Jemima has been around for 120 years...

And the company was the first-ever to create the instant pancake mix back in 1889. In 1926, Aunt Jemima was bought by Quaker's Oats, and this gave the company huge success with their products which expanded from pancake mixes to syrups.

They have been one of our country's most loved products for many years...

Until now, that is. People have been calling out the brand for being inspired by a very racist story.

A woman named Kirby took to Twitter this week to expose the truth about Aunt Jemima.

The video, that was originally posted to TikTok, was captioned "How to make a non-racist breakfast" and it starts by Kirby opening her fridge and taking out an Aunt Jemima box.

Kirby instantly gets to the facts...

"Did you know the name of Aunt Jemima means 'slave men' of the plantation south?" she asks boldly.

She then exposed the truth behind the brand's name...

"Did you know the founder Chris Rutt, a white man, got the name after attending a minstrel show - think blackface."

She continued to expose Chris Rutt...

"Did you also know he hired former-slave Nancy Green... who would go around cooking pancakes and telling people about the 'good old south'."

Kirby's video was an instant hit...

@singkirbysing I've never heard of this Pancake brand before today, but now I know I don't want any of that shit
— WhoCanPeliCan (@WhoCanPeliCan)1592366949.0

And it seems that a lot of people agree with her opinion on Aunt Jemima.

Many are feeling relieved that the brand has been exposed for what it truly stands for...

@NBCNews Great example of how supremacy is ingrained from birth. Folks who and being sarcastic are PART OF THE PROB… https://t.co/9FU0lDkEf8
— BeeYeaux (@BeeYeaux)1592392904.0

And Aunt Jemima has been branded as "harmful" and "full of errors."

But the biggest question being asked...

Why has Aunt Jemima only just been called out for racism now? Its products have always had the same branding which clearly shows racist ideologies.

Aunt Jemima has been a stereotype of black people for years now...

How has it taken us this long to realize how wrong this is?

After the immense backlash...

Quaker Oats announced that the image of Aunt Jemima will be removed from all packaging and the brand’s name will be… https://t.co/Dh436xAqdw
— TODAY (@TODAY)1592393996.0

Quaker Oats quickly announced that after over 130 years, they will be removing Aunt Jemima from all packaging and they will be giving the product a much-needed rebrand.

The company spoke out about their decision...

"We recognize Aunt Jemima’s origins are based on a racial stereotype," Kristin Kroepfl, vice president and chief marketing officer of Quaker Foods North America, said in a press release. "As we work to make progress toward racial equality through several initiatives, we also must take a hard look at our portfolio of brands and ensure they reflect our values and meet our consumers’ expectations."

Kroepfl said the company has worked to "update" the brand to be "appropriate and respectful" but it realized the changes were insufficient.

Quaker said the new packaging will begin to appear in the fall of 2020, and a new name for the foods will be announced at a later date.

Even though this is the change that our society desperately needs...

Many began calling out other companies who have been using black stereotypes for years to promote their brands.

And one of those companies was Uncle Ben's.

The rice brand has been around since the 1940s and it has cemented itself as one of the most popular here in America, as well as in the United Kingdom.

According to Uncle Ben's website, the logo and name are based on a black Texan rice farmer known as "Uncle Ben."

Frank Brown, a maître d'hôtel at a Chicago restaurant, agreed to pose as the face of Uncle Ben for the painting which became the company's logo.

The heat has been building on Uncle Ben's to make a similar move to the one Aunt Jemima made...

And it seems that they've finally done just that.

The company announced they would be making some changes to the brand.

"We have a responsibility to help end racial injustices. We’re listening to consumers, especially in the Black community, and our Associates. We don’t yet know what the exact changes or timing will be, but we will evolve Uncle Ben’s visual brand identity."

The brand will be evolving overtime...

And its parent company Mars has said it'll be making changes to the brand including its "visual brand identity."

There seems to be a divide in opinion about this decision, however.

Many people praised the company for choosing to rebrand and they have demanded that the real Uncle Ben receives more credit.

But some people feel this is a step backward...

@UncleBens Is this not a step backwards? By removing the image you’re essentially saying that black people cant be… https://t.co/vcvYmMyhgY
— nia preston (@nia preston)1592476983.0

Many have questioned the decision to remove Uncle Ben's face from the brand and they are wondering if it will be sending the wrong message about the representation of black people.

But the one thing that the majority of people have called for...

@UncleBens I appreciate that you are finally looking into changing your image and would encourage you to hire and o… https://t.co/NLSp6vaY9C
— Laura Wenham (@Laura Wenham)1592446384.0

Is for the brand to hire more people from the black community and to include more diversity within their workforce.

Now, the company's new name and logo have been revealed.

Weeks after vowing to make a change, the brand's new chapter has officially begun.

Uncle Ben's will now be known as "Ben's Original."

The announcement was made along with what appears to be as new logo.

We listened to our associates and our customers and the time is right to make meaningful changes across society," said Fiona Dawson, Global President for Mars Food, multisales, and global customers.

“When you are making these changes, you are not going to please everyone. But it’s about doing the right thing, not the easy thing."

Reactions to the new logo have been fairly mixed...

@UncleBens Wow, now the world is a much better place. Great job! Not gonna lie, this shit is embarrassing. These aren't real issues.
— Ｊａｓｏｎ░Ｒｏｃｃｏ (@Ｊａｓｏｎ░Ｒｏｃｃｏ)1600864828.0

Opinions have been left divided following the reveal.

Take a look at the logo below.

For more like this, keep scrolling to read about the backlash Lady Antebellum received after they changed their name because of slavery ties...