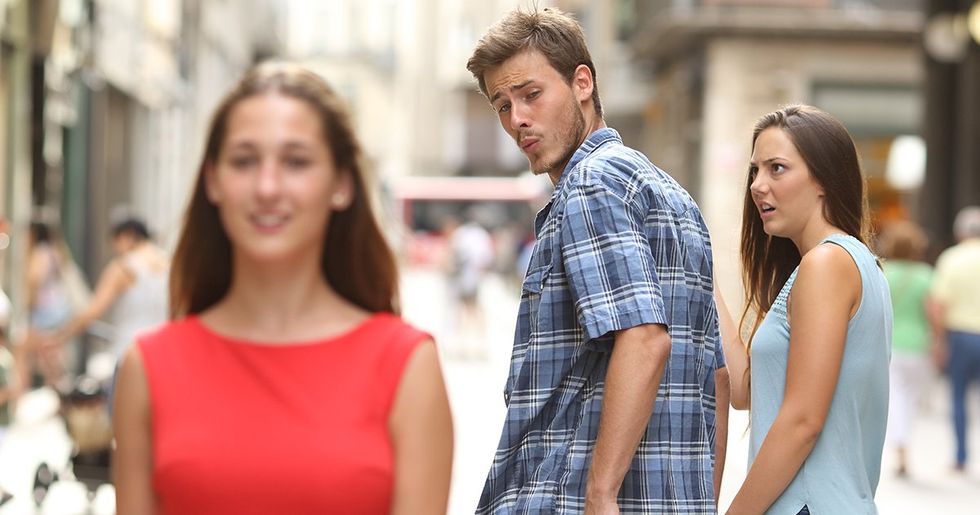 When a very funny picture perfectly encapsulates a feeling, it's hard not to make a meme out of it. Take, for example, the unfaithful guy meme — the stock image of a dude checking out another girl while he strolls with his now-furious girlfriend. It pretty perfectly sums up how easily distracted we all are. For instance, we took the meme and put "me" over the guy, "birthday cake" over the passing girl, and "actually celebrating our coworker's birthday" over the girlfriend.

But as it turns out, that image does not exist in a vacuum. There is a whole, involved backstory to the couple, and maybe the guy isn't as despicable as he seems. One Twitter user chronicled the saga, explaining, through stock photos, how the couple got to the point where they could behave so dysfunctionally in public.

This is the unfaithful boyfriend meme.

Here it is, a pure, uncut version of the most evocative image on the internet. This simple stock photo of a man going for a walk with his girlfriend only to have another girl catch his eye has captivated the internet.

It's simple to use.

There is nothing you can't communicate with this meme. Are you trying to eat healthy, but can't keep your eyes off those Milky Ways? Are you supposed to be studying for the GREs but instead watch Netflix? This is your meme.

If a weight-lifter starts to say a word that starts with "G," we'd assume it was going to be "gains," right? But the complicated, emotional process of realizing a fitness plan isn't for you is perfectly encapsulated here in this meme. I'd like to see Grumpy Cat pull this off.

It comes in many forms.

Jack Black caused an unintentional recreation of the meme just by walking around in real life. (It's unclear as to whether or not the distracted guy in this GIF was sleeping with Jack Black.)

It may, in fact, be the very first meme.

Way back in 192*mumble mumble,* Charlie Chaplin took a photograph that more or less foreshadowed the unfaithful boyfriend meme. It's like looking at meme hieroglyphics.

And it can get very specific.

Who is Republican Moses Sanchez? Did Phoenix voters truly reject the status quo? It is hilarious to me how specific this meme can be. It has such a "Hello fellow kids"-sort of vibe.

But the couple in this photograph has a shocking backstory.

Twitter user @BuhariSama went digging through all the stock photos featuring these two crazy kids and their dysfunctional relationship, and it takes some real twists and turns. Believe me, their tale is about much more than a wandering eye...

To start, every couple needs a meet-cute.

The couple met at college, and seemingly it it off right from the start. Although, if that first image tells us anything, there's another girl who got third-wheeled out of her friend group when they started dating.

They thought they were each others' forevers.

Opting to keep the ring loose in his pocket, the guy would propose, and make his girl that happiest woman in the world. But the cracks are already starting to show, though. This is the second batch of images in a row where we've seen her pulling him somewhere he isn't ready — or doesn't want — to go.

Then, a bun in the oven.

Our girl finds out she's pregnant, and she and her guy are so excited! She also waits until she's pretty far along — at least far enough along to be showing — before she calls her mother to even tell her she's married, let alone pregnant. Her and her mother do not have a good relationship. (There's actually very little information as to who she's calling in that last photo, so I don't know. I might be projecting here.)

Combining the couple's "we're a happy family" time with their "oh no, is our child sick?" time is a cruel move on @BuhariSama's part. Can't we revel in the joy of an adorable, happy family for at least one tweet?

The couple's new kid is not doing well. You can tell because no couple sits in that side-by-side, hands-clasped-sort of posed unless they're in the middle of a disaster.

Great. What started out as a fun deep dive into the character arc of some memes now has us thinking about a dead baby. Go ahead and take a minute to collect yourself before you continue on.

And so begins the cheating.

Here we start to see the guy begin to step out on his wife, not because he doesn't love her, but because he has no idea what to do with his grief.

The meme is re-framed.

You'll never look at this image the same way, will you? This guy is scoping out another woman because his heart is broken, and the girl is upset not because of what he's doing but because she has no idea how to move forward.

The cheating gets a little... egregious.

This is a man who cannot stand to look at his wife anymore because she reminds him of what he's lost. At the same time, he can't leave, because what kind of man would he be? That sort of emotional repression leads to his dalliances becoming more and more brazen.

Of course, she starts to catch on.

He leaves his phone, unlocked, out on the table, presumably with the Messages app open and a text from "HOT GIRL BAR" pulled up that says "wut u doin come over" and a thumbs-up tapback.

And confronts him about it.

Whether he acknowledged it or not, this is the moment the guy was looking for — his transgressions are out in the open, and now he has to talk to his wife about how he's feeling.

And here, the story gets even more real.

Remember how fun it was, just a few story beats ago? The guy was hugging his wife but kissing a girl behind her back! It was almost like a slapstick-y romantic comedy from 192*mumble mumble*! What a great time that was. Anyhow, now these two are wallowing in a pit of emotions for the first time since experiencing the greatest loss a person.

They decide to work through it.

As the only two people who can truly understand each other, the couple decides to stay together, resolving to, no matter what, maintain the hard-earned emotional honest-- wait nope he's cheating again.

Not only does she confront him...

The guy left the sexiest lacy panties out for her to find, but what's really upsetting here is that he's so deluded that he's playing this up like a chubby sitcom husband whose wife caught him eating ice cream after midnight.

... but she gets caught in some revolting scenario...

In what must be the ultimate embarrassment after such a tragic time, the girl is caught cleaning under the bed while her husband brings home another woman. She takes off her ring and hands it to her husband, ending the marriage with a sigh.

By this point, she's been through so much she can't even muster any rage. The best she can do is sternly tap on the other woman's shoulder like the mother she once was.

And they finally reach their breaking point.

There's a lot of shattering going on here, both in terms of pictures in frames and also hearts. As @BuhariSama, the only appropriate song to play here is "I Know I'm Not the Only One."

Which, for reference, is this song.

While it is a smooth, slow jam, this is not the "only one" I was thinking of.

That was this "only one."

This song, which sounds like the pissed-off, utterly-wronged female power anthem I wanted to hear, is actually from the perspective of the other woman? What a let-down.

Back to our couple...

After doing his best to live in the fantasy of a goofy sitcom dad, it looks like the guy has finally accepted reality. And he cries about it for a minute... before turning his anger on his now ex-wife. (Dude seems... not well-balanced. Hope that doesn't come into play later in the story...)

Here, we can see the vestiges of their once-perfect union. These two let their emotions get the best of them when dealing with the divorce lawyer. They're reminded of a time when they were on the same page, and it again reminds them of what they've lost.

The girl begins to heal.

BAH GAWHD, is that the one-time third wheel's music?! Here she is, ready to help her friend begin to pick up the pieces.

Not everyone deals with traumatic events the same way.

The girl begins to talk to that friend, and it turns out that the act of acknowledging what's happened is more powerful than pretending to live the idyllic fantasy life of Kevin James.

One half of our former couple is progressing.

In a move full of bravery and grace, our girl forms a relationship with the former third-wheel. Is she now a second wheel? Tied-for-first wheel? What kind of vehicle are we talking about when we call someone a third wheel?

But the guy has completely succumbed to the darkness.

Not only is he unable to accept what's happened to his child, but financial strain and now the loss of his wife — through his own actions, mind you — have turned our guy into a monster.

So he breaks into the house.

Jesus Christ, this guy. See, this is what happens if you don't deal with your emotions in therapy — you become the world's most detestable criminal.

Then, this slapstick rom-com becomes a horror movie.

The toxic feelings of unprocessed grief manifest as hatred towards his ex-wife. By loving him, she pulled him into the circumstance that so hurt him. His twisted mind needs revenge.

So he ties her up.

I wish we were still talking about bodybuilder memes.

But she taps into her inner strength.

Summoning the kind of gall and resilience reserved for the emotionally healed, our girl breaks from her binds and destroys her former love. If you're not pumping your fist in the air right now, cheering on our girl, you need to get your blood pressure checked.

Then she runs him over.

Like any great horror movie villain, though, the guy has one last jump-scare in him. As our girl tries to drive away, he leaps at her windshield. She floors it and squashes the guy, ending not only his life but also this horrifying chapter of her own.

She and her new lover are reunited.

And just as they did during our girl's last trauma, they will work through this together.

And now we have a new obsession to blog about on Tumblr.

Stock photo lesbians are the new Jim and Pam from The Office, in that I want them to be happy more than I want me to be happy.

So why did @BuhariSama craft this story?