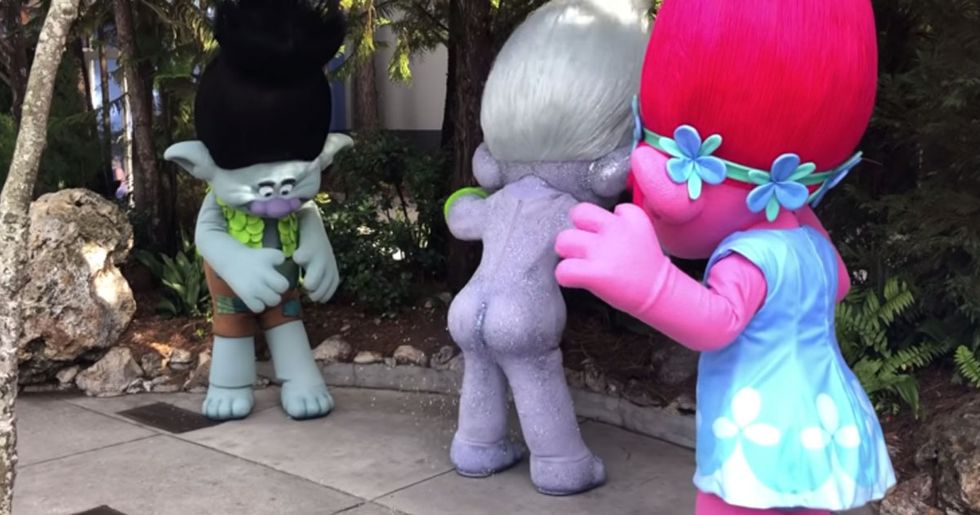 Universal Studios Now Has a Naked Troll That Farts Glitter

Universal Studios, Orlando, has recently added a new character to their midst, and it's a little on the strange side... The new recruit, a nudist troll named Guy Diamond joined the troll posse this year, much to the delight and bewilderment of visitors and bloggers. Guy is the only member of the posse of three that refuses to wear clothes, and at the end of his song, farts glitter into the air in celebration. People online are confused about the realities of such a job.

But working as a theme-park character is no laughing matter. Working at Disneyland is especially strenuous, with stories of strict work regulations, overheating and low wages, while at Universal Studios, employment can even be dangerous.

Universal Studio plays host to scores of holidayers every year. Showcasing colourful characters from its many franchises and entertaining guests with shows and rides.

Here's Shrek and Princess Fiona. I have to say, that Shrek costume doesn't look very manoeuvrable.

The animals from the 2005 film, Madagascar - doing a little dance.

The residents of Sesame Street have made appearances at Universal since the show's conception in 1969.

This has to be the most realistic Jimmy Fallon costume I've ever seen. They really do go above and beyond.

He's adorable. He's joined the Troll Trio and caps off his little dance by farting glitter into the air.

Twitter has popped off in response to Guy Diamond. People are speaking up both in support, and against the new character.

Here's one commenter, surprised at how well sculpted the Mr Diamond's butt is. Adonis-like, don't you think.

But it's not only sweetness and laughs. Some people, like Karen here, are genuinely angry about the crudeness of the character.

Karen's anger was received with more anger on Twitter. With people flocking to the defence of Guy. Look - it's his first tweet in years!

Look, besides all this, spare a thought for the people who's job it is to clean up the glitter farts. That'll stand out on a CV.

Dressing as beloved characters has been a viable profession since Disneyland was set up. But what's it like working under the costume? It's not as nice as you might think.

Disneyland is particularly bad. Some light research leads to a number of troubling facts about what it's like to work as a character there.

A Disneyland character's wage starts at $8.20 per hour, and maxes out at $13.59. That's not enough to make a living. And Universal isn't much better, average Universal Orlando Resort hourly pay ranges from approximately $8.98 per hour for Team Leader.

Unsurprisingly, what character you get to play at Disneyland, is strictly dependent on your body size. Mickey Mouse is between 4'8" and 4'10, Ewoks are even smaller. To play Maleficent you'll have to be between 5'9 and 6 foot.

Characters are reprimanded harshly if they break character in the slightest way. Making things very stressful for actors.

This one's amazing... Since characters aren't allowed to break character, they use secret codes to warn each other of distressing visitors or just to blow off steam. 'Have a Disney day,' mean's, 'steer clear of that one'.

With kids all fizzed up on sugar, interactions between kids and characters can turn sour. Here's Pluto blowing his top and chasing a child after being kicked between his legs.

The mouse watches everything you do. Disneyland actors report that they aren't allowed to talk about their job on social media, as it might break the illusion for unwitting visitors.

Universal can be dangerous

It's not just Disney that's difficult. But Universal Studios can be downright dangerous for employees.

There's been a number of accidents in Universal Studios over the years. A particularly nasty one happened in 2009, when an employee was hit by the Dragon Ride, causing her multiple head injuries.

In 2008, a large part of Universal Studios burnt down, putting the lives of several employees at risk.

On June 13, 2008, a mechanism failed, and a Simpsons ride vehicle's occupants were sprayed with vegetable oil. The accident could've gone a lot worse.

Theme park fill kids with wonder, and many of us can't resist the magic of they cultivate. However, spare a thought for who might be under the mask, or in Guy's case, beyond the fart...