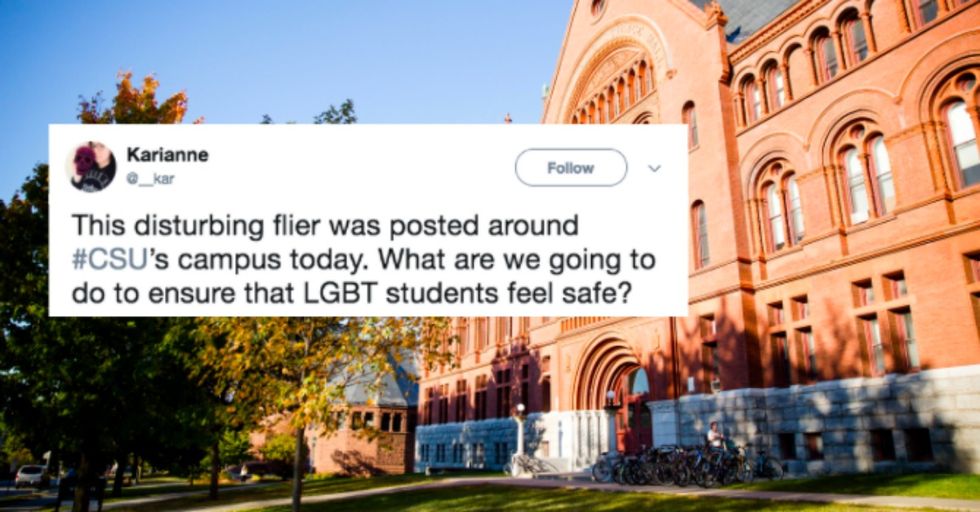 The line between free speech and speech that incites violence is a fine one. It remains a constant source of debate in the United States. Should colleges give a platform to hate artists like Milo Yiannopolous? Is violent language violent enough to be considered real violence? While universities need to be safe spaces for their students, is silencing those with dissenting opinions antithetical to the notions of exposure and education inherent in academia? These are all questions that came to the forefront of the consciousness when a disturbing poster was found plastered in the halls of Cleveland State University. The anti-LGBTQ+ posters appeared on a bulletin board the same day CSU opened its LGBTQ student center.

When students at Cleveland State University found fliers on campus urging LGBTQ+ students to kill themselves, they immediately reported them. Warning: This flier is depicted below and contains slurs and references to suicide.

The hateful flier lists statistics about LGBTQ+ suicide and urges LGBTQ+ students to kill themselves. It seems to have been posted by a group called "Fascist Solutions," though no one has claimed responsibility for it yet. Students immediately reported the flier to the administration, and school officials said they took down the poster as soon as they were alerted to it.

However, the statement from the university's president, Ronald M. Berkman, left a lot to be desired:

this isn't upholding of freedom or neutrality @PresBerkman this is cowardly endorsement of violence and there will… https://t.co/I5TVwfy1Zw
— jack 🦜 (@jack 🦜)1508226738.0

He begins by claiming that the "foremost priority" of Cleveland State University is to make their school a safe and welcoming place for students. But then he basically throws up his hands and goes, "Welp, free speech is a thing, so this hateful voice has a place on our campus." Needless to say, students were outraged. Where's the line between allowing for free speech and protecting the lives of your students?

While he was personally outraged by the contents of the flier, legally, there isn't much he can do to stop these messages from going up. Berkman scheduled a campus discussion to hear the concerns of students, and one student, Skyla Schaefer, shared her thoughts on that event in a thoughtful Facebook post: "The forum today leaves me with mixed feelings... President Berkman did apologize publicly for his original email and does seem willing to learn. However, he did not say how he is going to take action and what his next steps are. Proper staff training would help them understand why we are so upset with his initial response. The people on campus are ready for change."