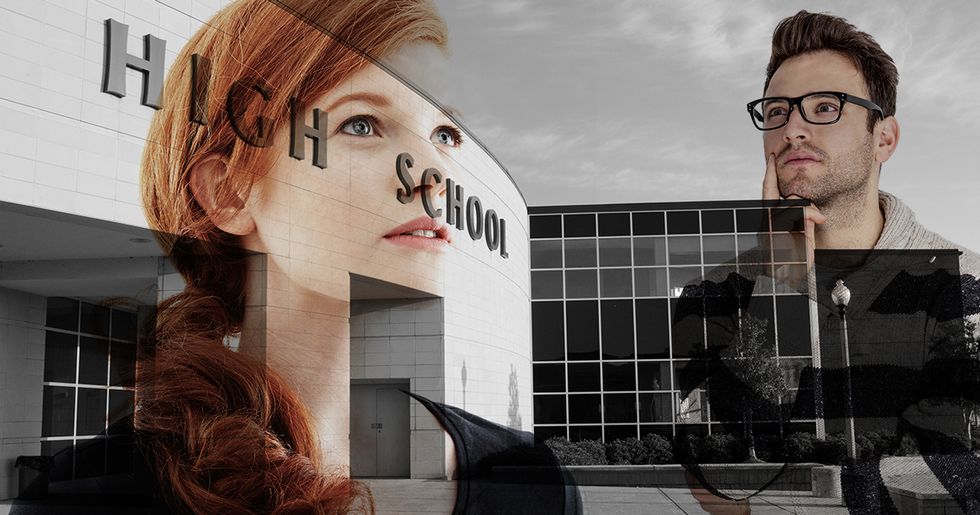 As someone who has been out of high school for 10 years — OK, hold on. I actually need to take a minute and have a mini panic attack about how old I am. Be right back.

As someone who has been out of high school for 10 years, let me just tell you: It is not all it's cracked up to be. Sure, I have a few friends from those days (and even earlier!) who I still keep in touch with, and sometimes it's fun to flip through my old yearbooks and laugh at my Quiz Bowl and orchestra pictures (I was very cool, guys), but for the most part, high school kind of just...happened. And then college happened. And now I get to live my life free from the constraints of formal education and it's pretty darn great.

This was the tweet that started the whole thing:

The responses quickly started coming in. As you can see, people did not hold back:

Everyone knows at least one person who really peaked in high school. They're very quick to tell you about their GPA or how they were the star quarterback or some other fact that no longer has any meaning.

Do you still have friends from high school?

So much for that Vitamin C song they played on the last day of school!

This is actually a pretty good idea:

Some schools do have classes like this! My own high school had a class called Personal Finance where we learned budgeting and...other stuff that I can no longer remember.

If you're in high school and you have a friend who has been absent frequently, check on them and let them know you noticed! The school might not.

The teachers can actually be pretty cool.

Having a normal conversation with a teacher was always a somewhat shocking experience. Like, you know they're real people, but actually seeing them be real people is wild.

I agree with this one!

So many people complain about how they never use algebra in "real life," when in reality, they probably do use algebra and just don't realize it.

Popularity isn't always all that great.

I think this can really go either way. Some popular people are going to be popular forever and will be able to coast through life as a result. Others are in for a rude awakening.

Of course, some people need the AP classes to make college a little cheaper. Nothing wrong with that! Just don't go around thinking you're somehow better than everyone else because you spend more time doing homework.

@madlatinathot High school is one of the most important times of our lives. It can literally shape your work ethic,… https://t.co/JICF9NSWYj
— Big Daddy (@Big Daddy)1549478484.0

What do you think? I'd say that my personality in high school doesn't have very much in common with my personality now, but who knows? Maybe there's more going on there than I think.

This is so true:

I don't think we even had 10 sick days...I'm pretty sure it was like 5 at my school. Either way, if you're sick, you're sick! You shouldn't have to be in class!

@madlatinathot Even as someone who benefited from the ACT and SAT they’re both ridiculous ways to measure a persons… https://t.co/JoUuu0jugx
— ATCWKBT (@ATCWKBT)1549545170.0

SO MUCH revolves around the score you get on a test that you spent three hours of your life on. That's pretty wacky if you ask me.

You mean all those movies about the ugly girl taking off her glasses and becoming popular were a lie?! Say it ain't so!

This is too real:

As someone who studied education and has taught plenty of classes... This is so, so true.

Did you ever ditch class?

@madlatinathot ditching school isn’t worth getting behind
— natalia (@natalia)1549487016.0

Ditching class is one of those things that seems so fun at the moment but quickly becomes an officially Bad Idea. There are definitely consequences.

I wish I had thought of this:

Oh, teachers don't want to spend their evening hours doing menial work that doesn't have any real benefit? Neither do the students!

I'm sure this depends on both the high school and the college you attend! In my case, I found college to be pretty similar to high school. More homework, though.

This is true beyond high school, too:

Sometimes, you become "friends" with people because you have to see them every weekday and it's just easier to be friendly. There's nothing wrong with that.

Are we sure these parties even happen?

I honestly am not aware of a single house party that was like the ones you always see in movies. Now, maybe I just wasn't invited to them (a distinct possibility!), but I'm starting to doubt anyone has ever been to a party like that.

Not all of the lessons should be from a textbook.

I super agree with this one. There is such a huge problem with the sex education students are receiving in high school (or not receiving, more like).

I love sweatpants. I am wearing sweatpants right now. But I would not wear them in public. (Not judging you if you do, though!)

The fact that gym class is pretty much the only chance you get to be outside during the school year is actually pretty nuts if you think about it.

Are you paying attention?

@madlatinathot Unpopular opinion: high school does teach you plenty of things outside of the classes. Some people j… https://t.co/13JubreLRD
— Robert uchiha (@Robert uchiha)1549505847.0

This is such a good point. You certainly can learn a bunch of important stuff in high school. It's just a matter of whether you're actually looking for those lessons.

College isn't for everyone!

I really wish this had been a bigger part of the conversation when I was applying to colleges. It can be super overwhelming to try and plan your entire career when you're only 18! (Not to mention that so many people are encouraged to take on thousands of dollars in debt in order to go to college...)

You wanna be popular?

It definitely always seemed like the popular kids experienced the most drama. But there was drama among us, unpopular kids, too. Does anyone actually escape the drama?

OK, this one I do not agree with.

Math games are always preferred to just doing problems out of a book! Ice breaker games can disappear forever, though.

This one was obviously written by a freshman:

@madlatinathot 99% of upperclassmen have a sense of entitlement as if they weren’t an underclassman before
— rhiannon (@rhiannon)1549504755.0

Don't worry. This pretty much completely disappears once you're in the "real world." Nobody really cares how old you are anymore.

If you're in high school right now, the No. 1 thing I can recommend to you is to take a fine art class — orchestra, band, choir, art — anything!

It's not a big deal if you only have a few friends.

Do you know what having only a few friends means? It means you're not constantly trying to make plans with a bunch of people and you can actually enjoy some time to yourself. It's great.

And now for the most controversial opinion of all:

Uhhhh, I mean, making up work sucks, but snow days? Snow days are magical. Share this with someone you went to high school with!