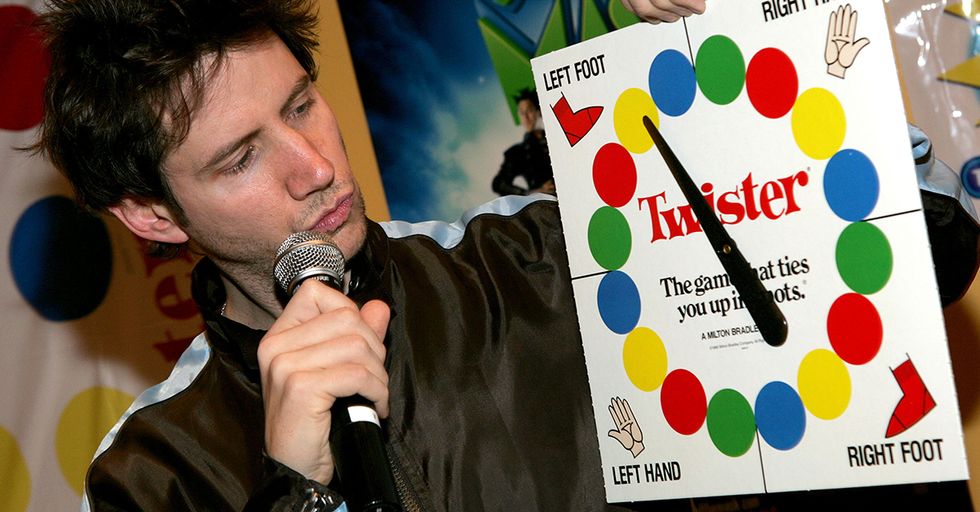 Many current and popular children's toys have been around the block a few times and withstood some major fender benders only to continue cruising toward success. Classic toys like Barbies, Twister, Legos, Cabbage Patch Kids, Furbies, and Mr. Potato Head, were, for many of us, hallmarks of childhood. Now that we aren't kids anymore, we can look back and realize that even our toys had a lot of growing up to do.

Here are 10 unsettling facts about 6 classic toys that have all done the walk of shame once or twice in the past. But we forgive them.

When it comes to toys, no Barbie's perfect.

1) Barbie and Ken are related.

Turns out Barbie and Ken were named after siblings. According to Thought Co:

The Barbie doll was invented in 1959 by Ruth Handler, the co-founder of Mattel, whose own daughter was named Barbara... The Ken doll was named after Ruth's son and was introduced two years after Barbie in 1961.

Oops. No one told me. I already felt like a big enough perv for certain acts the two engaged in under my watch when I thought they were just boyfriend and girlfriend. Now to find out they're related, I might need therapy... I mean more therapy. Don't worry. I'm already in therapy.
While we know that all children play differently, my slumber party past proves that Barbie and Ken were pretty promiscuous. Never anything freaky though, nor even romantic, always just straight to business... kind of like marriage. So, we just wonder why a smart young inventor and mother of two like Ruth didn't consider the inevitable and impending incestuousness prior to naming her perfect plastic creations after her two children. Maybe her mind wasn't in the gutter... like some people's. (Ahem)
I just can't help but worry that one day Barbie will find herself in a Kim Cattrall Mannequin type situation where she comes to life only to learn that she's guilty of incest on a global scale. It might be too much to take and she could just melt back down into her plastic self forever. But that'd probably be for the best considering that Barbie would not have much quality of life in human form, due to her severe disabilities...

2) Barbie's "perfect figure" is out of this world.

To say that Barbie's figure sets unrealistic expectations for women is beyond an understatement. According to a study performed by Rehabs.com, Barbie's supposedly perfect figure would prevent her from walking upright or menstruating. She'd only have the room for half a liver and a few inches of intestine.
With size three feet and ridiculously tiny ankles, she’d have to walk on all fours, and considering her arms would be too skinny to be functional, getting around might be a challenge. The fact that her neck would be too long to hold up her oversized head pretty much seals the deal. She'd be the perfect paraplegic.

Good news, if you've got kids, you may quite possibly unknowingly already own sex in a box. Okay, that just sounds wrong, but that's exactly what critics called the game when it debuted in 1966, according to MetalFloss.com.

4) And the critics aren't the only ones with dirty minds.

A mom from Georgia was recently busted for inciting a not-so-innocent game of "Naked Twister" with her teenage daughter and her friends. And the prize she gave the 18-year-old boy who won the twisted game? Sex, with her. The Huffington Post reports:

Yikes. Suddenly, I don't feel so weird about the whole Barbie and Ken thing.

5) Legos are a bunch of frauds.

We already knew they were evil. Any mom whose stepped on those little bastards fourteen-thousand times knows they are weapons. What we didn't know is that they are also thieves. But it doesn't surprise us. Turns out a small shop named Kiddicraft in Germany created and had even patented the interlocking and then wooden toys, but as soon as Lego laid eyes on the idea, suddenly they were called Legos and the rest is history. Kiddicraft was never to be heard from again. Upon learning this news, I may have to issue a ban on all Lego products in my household. Sorry kids, but it's just not right!

6) And they're more than just a pain in the ass.

Karl Smallwood of Today I Found Out (via Yahoo) wanted to find out exactly what it is about Legos that makes them painful plastic landmines for parents. He concluded that the combination of a highly sensitive body part with many nerve endings versus a plastic square designed to be highly durable results in a recipe for pain. New York University physics professor Tycho Sleator tells Quartz Media that "The sharp corners also exacerbate the pain." Yeah, no kidding, Professor.
There's also something confusing about the role that pressure plays in there, but the point of it is that stepping on a lego actually hurts us more than it hurts our kids... and not because we love them so much that we feel their pain in addition to our own. No, cute, but wrong. It's our age, size, and those nightly 11:45 p.m. fridge raids that make stepping on a lego more painful for parents as we're simply heavier than our kids, thus more pressure, ergo more pain. We suppose this concept is nothing new;  just like dinner, bath, and bedtime, the bigger you are, the more painful the process.

Again, we knew something was off with them but couldn't put our finger on it. Now we know that their creator, Georgia businessman Xavier Roberts, was just as fake as his dollies. According to TopTenz.com, a woman named Martha Nelson Thomas originally created the dolls and even came up with the whole adoption bit, too. Good thing Martha took the creep to court and won a settlement in the late 1980's.

8) They're not only creepy thieves; They eat children.

The doll was basically the spawn that would descend if Chucky's Bride and Jaws had a one-nighter.

After about 100 reports of kids getting their hair and fingers caught in the doll's mouth, Mattel decided to shovel out $40 reimbursements to those with proof of purchase of the doll and immediately pulled it off shelves.
According to The13thFloor.Tv:

Parents [were] calling in distress, screaming that wild and uncontrolled Snacktime Kids were consuming their daughters’ hair. Because the mouths would not “spit out" food, at least one parent had to cut her child’s hair out of the mouths of the trichophagic doll and remove the batteries as to not cause any more damage.

Sounds like a great time, Mattel.
While we all know that when a lockjawed demon doll meets tiny fingers and sensitive scalps, things have gone terribly wrong... But, is it just me, or is the fact that "Snacktime Kid" craps into her backpack and Mattel calls it magic equally as disturbing. As the song in the commercial explains:

And when you think she's through... just look inside her backpack and like magic... the snacks keep coming back!

If "magic" is Mattel's P.C. child-friendly term for a colostomy bag, then yeah, that's magic alright.

Furbies were officially banned by the NSA in 1999 on the Norfolk Naval Shipyard, and the Pentagon in 1999 as administrators were seriously concerned that someone might bring their furry friends to work and the little busybodies might eavesdrop on top-secret conversations and even end up chirping the classified information all over town.
However, the company who manufactures Furbies did not hesitate to throw some shade the government's way. Tiger Electronics, a division of Hasbro toy company, immediately issued a statement calling the NSA's concerns “funny yet incorrect rumors" and snidely added that "The NSA did not do their homework. Furby is not a spy." Hmmm. The National Security Agency "not doing their homework." That's comforting.

10) The original Mr. Potato Head was a real dud.

In 1952, the original Mr. Potato Head hit shelves across the nation. Yet something was missing from the version we all know so well today. Mr. Potato Head was missing from Mr. Potato head. Back in the day, things weren't so easy. Not only did our parents have to walk 10 miles in the snow everywhere they went, they were also burdened with providing their own potatoes at playtime. Basically, kids just got a box filled with spears fastened to facial features and we're left to forage for carbs themselves. Rough times, no doubt.

First of all, how many kids have vegetables at their disposal? And if mom does decide to spare you a spud, then what the heck's for dinner? How many siblings got stabbed in the eyeball by Mr. P's ear when they tried to join in on the fun? How many moms found rotting potatoes in their kid's rooms and how many times did they look up to the skies and curse potato goddess, Axomamma? So many questions and zero potatoes... You can always Axo-mamma, though. Of course, it took nearly two decades before child safety laws outlawed the toy's sharp and spiky appendages and replaced them with child-friendly plastic pieces. They also started including an actual toy potato along with Mr. Potato Head's facial fixtures.
At the end of the day, we're forgiven for Barbie and Ken's transgressions (a little wishful thinking on my part). Most of us were spared Cabbage Patch Snacktime Kid's crocodile grip and the consequential scalping. When it comes to Legos, now we know we're not just melodramatic wussies with low pain thresholds. Furbies inadvertently confirmed that the federal government is perhaps the only entity remaining that's less technologically advanced than our grandparents. And Mr. Potato Head reminded us all just how much we take for granted sometimes. Over the past 20 years or so, we've learned a lot and so have our favorites pastimes. Now if you don't mind, I just realized that I've got at least two decades worth of catching up to do with an old friend and her brother...