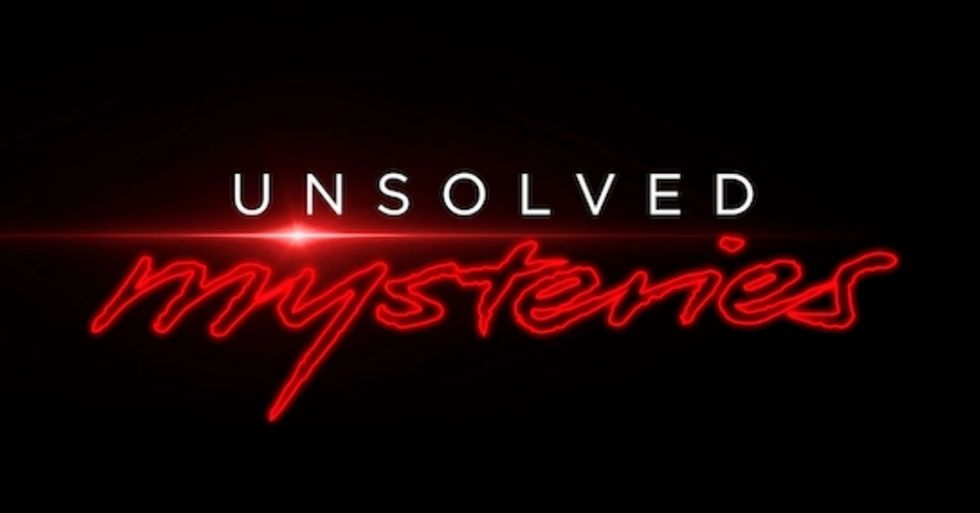 'Unsolved Mysteries' Volume 2 Is Coming to Netflix Later This Year

Since it returned to our screens, Unsolved Mysteries has had us well and truly gripped. And now, there's been an exciting update...

Netflix has provided us with some amazing news this week.

It's time to get your detective hats on as Unsolved Mysteries is returning for a second stint, and the streaming giant already has a release date.

The countdown is on...

And we couldn't be more excited.

There's no doubt that Unsolved Mysteries has taken the reigns when it comes to documentaries.

The iconic series returned earlier this year to give us a new set of harrowing stories about crimes that occurred under very mysteries circumstances.

And boy, did they make an impact.

The show quickly became Netflix's number one most-watched show during the week of its drop, with all 6 new episodes available worldwide.

And people just can't seem to get enough...

I was like this at the end of every episode.

If this wasn't you too, then are you normal?

Me after each episode getting online to see if there’s any updates on the case #UnsolvedMysteries https://t.co/3Ht6C0zfCd
— Ryan Sene (@Ryan Sene)1594011278.0

Thankfully, we have some good news about re-opened cases.

Others had some pretty passionate responses to some of the episodes...

When Unsolved Mysteries asks if you have any information on who killed Patrice https://t.co/d3N0QBELVs
— Megan Correia (@Megan Correia)1594007453.0

This was one of the most common...

This story was harrowing, to say the least.

Fans were left shocked and borderline nauseous when they found out that Rob, who's wife had been murdered, sleeps with her skull and ashes...

There was something eerie about his story...

And the way he treated Patrice's son. It just didn't sit right with any viewers.

But there was also another story that stood out a lot...

This was such a heartbreaking story. Alonzo Brooks' death came after his friends accidentally left him at a party an hour away from where he lived.

And according to Brooks' family, they suspect his death was a hate crime.

Sixteen years ago, La Cygne in Kansas was a predominantly white area where that very night, 3 black people died in what were ruled as "brawls" in the area. The entire town refused to talk about it or aid the investigation at the time.

The investigation by the FBI has re-opened thanks to this series.

So an entire town in Kansas refused to give evidence with regards to the death of #AlonzoBrooks and then the KBI cl… https://t.co/ikO5QhX9lM
— Elizabeth/Sharky (@Elizabeth/Sharky)1593643017.0

Because of the lack of effort by the police and the residents in that time, the investigation has been re-opened and now a $100,000 reward is being offered to anyone that could help lead to an arrest.

Do you know who Alonzo Brooks was? He was a black man from Kansas who was found dead after attending a party of all… https://t.co/pmdYHFliP2
— brittany (@brittany)1593640004.0

“It’s been 16 years, but we hope that with this passage of time, someone who has information will come forward," she said. “Some of these kids, who are adults now, may have been scared to come forward before, or may not have known what they saw was important. But any piece of information is significant and could be the missing puzzle piece we need to solve this case."

The cause of death was undetermined at the time, but many believed it was a suicide...

Yet there was no sufficient evidence to support this baseless claim. One other theory suggested he accidentally tumbled into a relatively shallow creek, in Linn County, leaving behind his boots and hat, all with no witnesses whatsoever. It was very hard to believe.

Producers also confirmed that across multiple episodes, witnesses, and other "credible" sources have come forward.

Helping investigations move one step closer and you never know, these "unsolved mysteries" might just be solved.

Because Unsolved Mysteries is returning to our screens once again!

The news was confirmed by Netflix on Wednesday in a cryptic tweet.

And we've got all the details here for you.

3 of them will take place outside of the US, according to producer Terry Meurer.

"Out of the twelve [episodes] that we’ve produced, three of them are international. 2 of the international stories will be in the second [batch of episodes]. Then we look at every other kind of diversity: We've got international versus domestic, we have rural versus urban, we have age diversity, we have ethnic and racial diversity. They all have to have a lot of twists and turns and need to be very intriguing. If they're intriguing to us, we know that they’re going to be intriguing to an audience."

There's also going to be a ghost episode, for all those who love all things paranormal.

All Meurer would tell Variety is that "it's an unusual ghost episode."

Of course, reactions to the news came pouring in.

Fans were very happy, to say the least.

@netflix @Unsolved I love this format by the way. Instead of making the show about whoever is hosting it, you made… https://t.co/8WK1e4ziFf
— Rowynne Crowley (@Rowynne Crowley)1597849637.0

Unsolved Mysteries Volume 2 will hit Netflix on Oct. 19. In the meantime, scroll on to check out another Netflix watch that's got everyone talking...