There were also many comments like this one that tried make Clint feel guilty about vaccinating her kids. | 22 Words 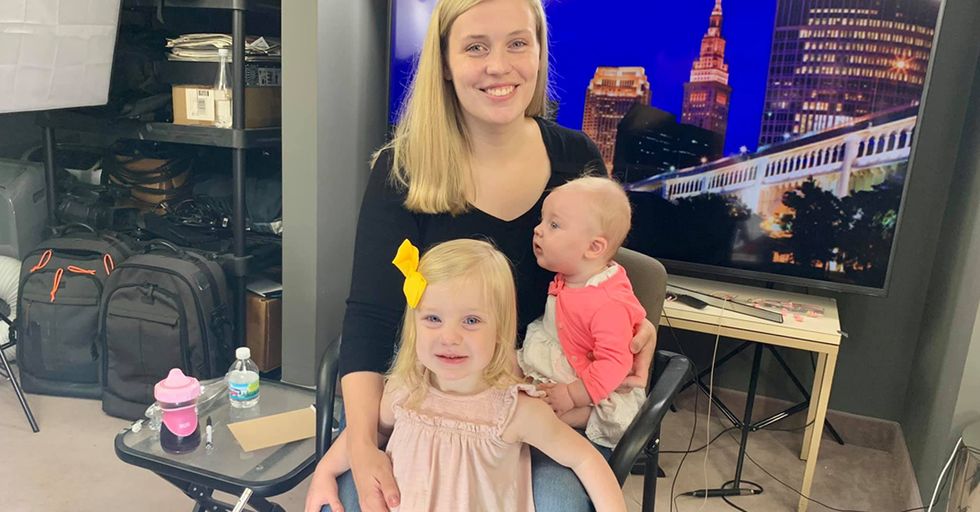 Unvaccinated Mom Reveals Why She Decided to Vaccinate Her Own Kids

Diseases are back, guys. We’ve been hearing about outbreaks everywhere recently. Headlines show the concern that the Center for Disease Control has over the terrifying number of cases of measles that have popped up since the disease was declared eradicated in 2000.

We're just here to remind you that the MMR vaccine is safe. Unfortunately, many parents are still not getting their children vaccinated.

While this is unsettling, the other end of the spectrum shows that there are parents taking a pro-active approach in protecting their children, and themselves, from diseases that can be harmful by getting vaccinated.

Mom of two, Abbey Clint, grew up in an anti-vaxx household and decided to not repeat her family’s history and got her kids vaccinated. Clint shared her experience and her decision to vaccinate on a Facebook post that has gotten the attention of anti and pro-vaccine groups. “I grew up unvaccinated before it was cool,” she wrote on Facebook. “I’ve had to catch up on my inoculations with each pregnancy. Glad I didn’t catch measles while pregnant!” she wrote.

Record-breaking outbreaks of infectious diseases that are preventable with vaccinations are causing serious conversations about the anti-vax movement. Clint’s decision to share her experience, especially coming from a family that did not vaccinate, is proving to already be helpful in stopping the spread of misinformation regarding vaccines.

The World Health Organization (WHO) has stepped up their efforts to create health reform in a very concerning area, vaccine hesitancy.

For the first time this year, the WHO named vaccine hesitancy as one of the top ten global health threats in 2019.

WHO wants to particularly point to the “why?" diseases like the measles is now becoming a heath crisis when it was once eradicated.

The WHO defines vaccine hesitancy as “the reluctance or refusal to vaccinate despite the availability of vaccines" and says this trend threatens to “reverse progress made in tackling vaccine-preventable diseases."

The phenomenon has caused many parents to distrust their doctors advice about vaccines.

Measles, in particular, was declared eradicated in the year 2000. However, we now have record-breaking outbreaks of measles around the country.

Since January 1, 2019, 764 cases of measles have been reported according to the CDC.

The current outbreaks of measles around the country are a result of parents being afraid to vaccinate their children against the virus. The number one concern? Autism.

It has been extensively proven that vaccines are safe and do not cause autism. The World Health Organization has also said that there is no link between the MMR vaccine and autism or autism disorders.

There are people that have decided to take the proper precautions and vaccinate their kids and themselves.

Abbey Clint was formerly an anti-vaxx mom and she recently took her 7-month-old daughter to get vaccinated and posted about her decision on Facebook.

Clint expressed how proud she was to be able to vaccinate her kids.

"I grew up unvaccinated before it was cool. I've had to catch up on my inoculations with each pregnancy. Glad I didn't catch measles while pregnant!“, Clint wrote on her Facebook post.

It’s not common to read the experience of someone that was once  anti-vaccines to now be pro-vaccines, so of course her post has drawn a lot of attention.

The 30-year-old Pennsylvania mom knew there may be pushback from her family regarding her choices but she decided to be vocal about her decision to vaccinate and help stop the spread of misinformation about vaccines.

And because record-breaking outbreaks have continued to bring this issue to the forefront.

Clint said she grew up unvaccinated because of her mothers distrust of doctors.

And it’s this distrust that is also driving many parents to not vaccinate their children.

Clint also grew up hearing every argument against vaccinations, and now she feels more informed and unwilling to take those risks.

For anyone else, all it should take is a conversation with your doctor and some reading.

She feels lucky she didn't get seriously sick and isn't willing to take that risk on her own children.

And with all of the outbreaks that are being reported, no parent should.

A reminder that measles is a preventable disease with vaccines.

Clint told Your Erie that she changed her mind about vaccines when she learned that her mother-in-law almost died when she contracted measles.

It was then she decided her kids would be vaccinated.

Due to the recent outbreaks of the measles throughout the country, there are other parents that have also gone to social media to spread awareness about the safety of vaccines.

“Vaccinations are safer, so much safer."

“For whatever reason, we decided collectively that cars aren’t bad enough. That we weren’t going to drive them," Clint told Your Erie, comparing the decision to drive to something far less dangerous to prove her point.

Clint also posted an infographic that shows the lack of scientific evidence linking vaccines and autism, as well as the risks of preventable diseases.

Unlike many of the memes and information shared on social media about anti-vaccination, the graphic Clint shared has multiple sources.

Information backed by science is what we should share, and read, regarding vaccines.

"There are many anti-vaccine memes shared in my personal circles," Clint old BuzzFeed News. "So I was just throwing out a different side of things, just for the sake of keeping it a conversation and not an echo chamber."

Many people thanked her for committing to protecting her children and the community, while others were extremely critical and went on the attack.

I'm sure many of us are highly aware of how heated vaccine discussions can become.

Even with the science-backed information she shared, her post got a lot of pushback.

Some people went as far as to claim that her children already looked like they were having adverse reactions to the vaccines.

Clint reassured that her kids are healthy and have not had bad reactions to the vaccines.

There were also many comments like this one that tried make Clint feel guilty about vaccinating her kids.

Anti-vaxxer’s also share many informational info graphs that do not seem to be backed by reputable sources at all.

For many anti-vaxxers, their “research" supersedes anything a doctor or nurse advises them.

Like Clint's mother, anti-vaccine groups have a strong distrust of doctors and health professionals.

But among all of the negativity, there were many people that were supportive of Clint’s decision.

Some were also anti-vaccines once.

Other supporters of Clint also mentioned that they did not get vaccinated until they were adults.

This commenter also mentioned in the comment thread that she was very sheltered and was homeschooled.

Why would anyone want their child to get a preventable disease like measles or whooping cough?

It's pretty mind-boggling, especially when you read stories about parents purposely trying to infect their kids with these diseases during "measles parties".

Community immunity helps everyone, especially those that cannot get vaccines for certain diseases. It's science.

Clint has now followed the CDC's recommended schedule for vaccines with both of her daughters.

The CDC has said the vaccine schedule is safe for all children.

She's hoping more parents learn from doctors and midwives that the ingredients in vaccines are also found in nature, and that they are safe for children.

And with all of the outbreaks of infectious diseases, many people should be proud to vaccinate.