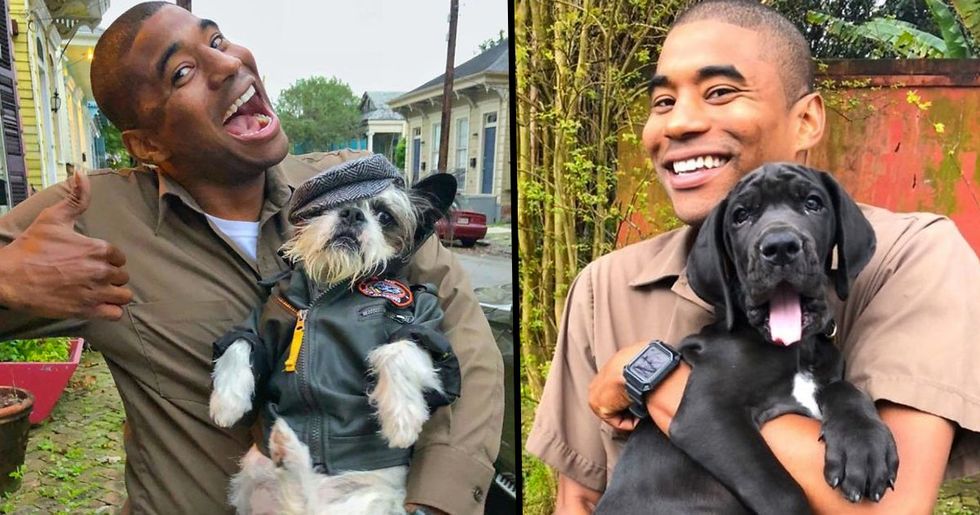 UPS Driver Takes Photos With Every Dog He Meets During Work

Sometimes, when life gets difficult, when reality becomes too much, or when you feel the broad hands of existential dread knocking at your door, it's best to just let your eyes cross, your jaw go slack, drool, and stare at thirty pictures of dogs.

If today is one of those days, luckily for you, Jay, a UPS man from New Orleans, has arranged just the thing for you. On his delivery route, Jay pursued the bold idea of photographing himself with every dog that crossed his path. The result is something truly amazing. We've spent far too long staring at Jay's pictures - and now you can too.

Meet Bit: he's a terrier, a veteran and a christian - in that order.

Meet Prince: he's an aspiring academic with a passion for craft ale and William F Buckley.

Meet Kash: don't let her size decieve you, she's killed before and she'll do it again.

Meet Morgan: he works in a bike shop to subsidise his gambling problems.

Meet Stanley: Stanley just moved down here from Soho - he needs some time to adjust.

Meet Sofia: She's a tearaway with a fetish for rubber.

Meet Gov: The only honest cop in town, a thrill seeker and a loving husband.

Meet Kingsley: His friends call him 'Kings'... he doesn't like it.

Meet Louis: An evangelical lobbyist who recieves a questionably large amount of funding from the Zabludowicz foundation.

Meet Jiggy: Jiggy's a big-time DJ, but really he just wants to paint.

Meet Oy and Belle: They've recently gone poly - Oy's down but Belle's not feeling it yet.

Meet Summer: She was a child star but developed a pervasive amphetamine addiction as an adolescent - she's surprised she still has a nose.

Meet Trixie: Trixie owns a chain of vape shops, she spends most of her time listening to soul tracks and crooning for the 1980s.

Meet Higgins: A conceptual artist who once spent six weeks locked in a cage with Ulay.

Meet Cusha: He moved to New Orleans for the above-ground burials... no one really knows what that means.

Meet Spot: Spot just got out of jail, now he does community service down at the youth center, people say he's back on prescription.

Meet Ziggy: He used to be the hype-man for Damian Marley. Now he works at Walgreens.

Meet Josie: She used to be a folk singer, now she works with kids. She hates kids...

No one knows these guys.

Meet Charlie: He's a born again with a rampant tendency towards racial bigotry - it's a real problem.

Meet Gus: Gus is a scientist, he's book-smart but has absolutely no social skills.

Meet Dakota: People think she's a fox. Which really upsets her because she's not a fox.

Meet Chula and Chapo: Chula always gets all the attention, Chapo just wants to sing.

Meet Half-Pint: No one knows why people call him that.