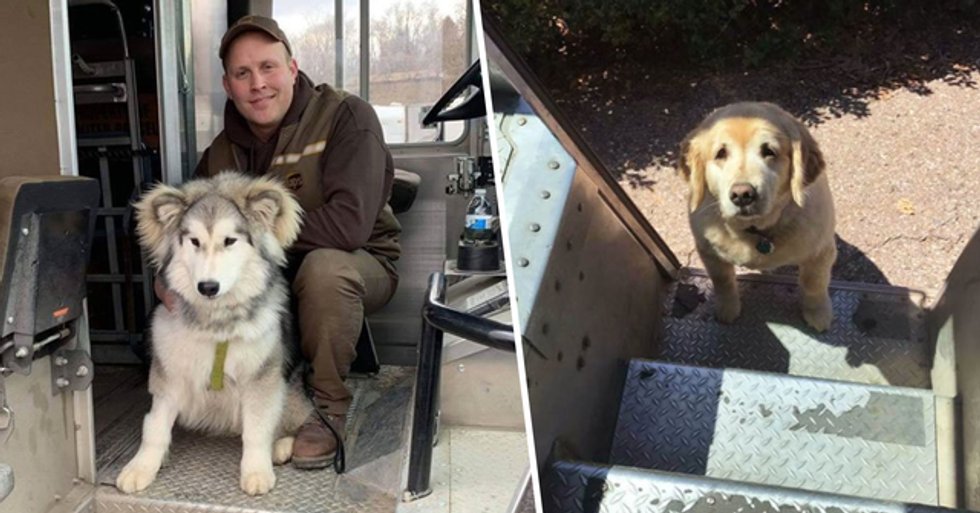 It's a commonly known fact of life that dogs make everything better. Feeling sad? A dog will cheer you up. Lonely? A dog will be there! Stressed out at work? Dog.

Well, one man who works as a delivery worker for UPS had this idea exactly and decided to dedicate a Facebook page to all of his wholesome encounters with dogs (and a variety of other unexpected animals...) while out and about delivering parcels.

The Facebook page, which was appropriately named UPS Dogs, instantly blew up and now, hundreds of different UPS drivers have been able to share their adorable experiences on the internet.

Being a delivery driver isn't always an easy job.

The hours are demanding, the work is exhausting, and, as most people working in customer service will know, the customers can be downright awful.

It's important to remember the perks and the highlights.

One UPS delivery worker had this idea exactly...

And decided to start a Facebook page to document all the dogs and other friendly animals that he comes into contact with throughout his working day.

And it was an instant hit. The page immediately took off and has now accumulated over 1.5 million followers on Facebook, and a further 488,000 on Instagram.

I bet you're all thinking the same thing...

Where can we see the dogs?! Well, worry no more, because I have put together some of the cutest submissions from the page. Keep scrolling for some furry goodness... You can thank me later.

Here to kick off the festivities...

We have Rudy from Michigan who, despite being as blind as a bat, loves to greet his local UPS driver.

This whole family of Corgis were keen for some attention...

How do we cuddle them all at once?

And Oakley from Kentucky had more than just Santa Claus visiting her over Christmas...

Yep, this pooch is more excited for cuddles from her local UPS driver.

Carly and Liza Jane are Virginia Beach's most loyal members of the UPS welcoming committee...

Baby Otis popped in to say hi to one Oregon delivery driver...

Such a good boy.

"When the forces of evil conspire to prey upon the law-abiding citizens of the Newberg frontier, you can sleep easy knowing that the mighty Cupcake will be there to stop them!"

Though I'm not sure how good those little legs are behind the wheel...

This little guy even had his own UPS uniform...

A dog or a teddy bear?

No one can tell the difference!

And this good boy likes to visit his delivery drivers, despite his disabilities.

Champ is a foster dog from Shepherd Rescue in Virginia and is also a distemper survivor who uses a special quad wheelchair. For the love of God, someone give Champ a home!

Did you know that UPS give out the best belly rubs?

Here we can see Puddles, from New Jersey, enjoying one of the UPS finest.

Baxter from Michigan can't get enough of them!

Montana's UPS office has the most adorable employee...

Go to Mr. Bentley for all your managerial needs, folks.

This husky was keen to jump on board...

A delivery driver in Vermilion, Ohio, had the best surprise upon opening his truck's doors.

Okay, this looks like the best day at work ever.

This South Carolina UPS driver was in for a real treat with these cuties... All eleven of them!

Double the trouble from across the pond...

Babs and Bertie from Manchester, U.K also enjoy having cuddles from their local UPS driver.

And quadruple the fun...

This family of gorgeous Golden Retrievers from Michigan were keen to climb onboard the UPS delivery truck.

It's a Rottweiler takeover!

Not that I'm complaining...

"Excuse me Sir, but I need to scan the parcel first..."

This pooch clearly can't wait to see what his mailman has brought him today.

Who could say no to that face?

Kimber from Washington likes to steal a few treats on the sly when her local UPS driver arrives.

Jamers from Virginia taught his UPS driver to hand him a parcel whenever he barks. Such a clever boy.

It doesn't get quite as wholesome as this, does it?

Fozzy from Nebraska wears the UPS uniform just as well as his local driver!

These UPS Dogs costumes seem to be a real trend!

Just look at his smile.

Oh, and did we mention that there are more than just canine visitors?

Yep, a whole variety of different animals come to visit our UPS drivers as they're out on deliveries.

Even the cats like to get involved with the fun...

Well, not as much as the dogs, as this kitty from Maryland quite clearly demonstrates...

As do the racoons...

Just how safe this selfie was, I have no idea...

Is that a camel?

I have no words.

Yep, there was even an alpaca.

Because there's always an alpaca, isn't there?

The parrots love to say hi, too!

One UPS driver got a nastier surprise in Florida (are you even shocked?). Can we go back to cute dogs, please?

Elsa, the Wisconsin "house sheep" popped in to say hi...

And she even ate a dog treat. Best sheep ever?

And one more deer...