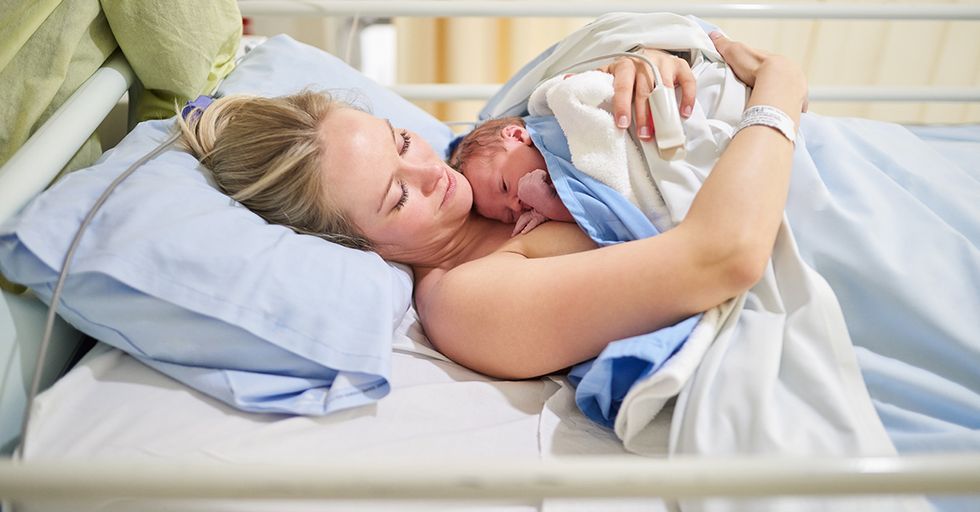 Childbirth is a different experience for everyone. Some people talk about how giving birth was a breeze, while others share nightmare stories that can scare a person off from ever thinking of having kids.

In movies and TV shows, we see childbirth as the mother screaming obscenities at her partner and pushing for dear life. Usually, in TV shows and movies, there aren't any complications and everything is perfect once the baby arrives. But life isn't like fictional storylines - in fact, for many, childbirth can be a matter of life or death.

A new study has recently revealed that US mothers are more likely to die during childbirth than their own mothers were, and over half of those deaths could have been prevented. Race plays a huge role in the statistic and the Centers for Disease Control and Prevention has released a new report detailing the devastating situation.

Pregnancy is getting more dangerous in the United States.

According to new reports, black women are the most at-risk when it comes to childbirth.

Over 50% of these deaths are preventable, the Centers for Disease Control and Prevention explains.

The deaths may be rare...

But the number has been rising for the last several decades. "An American mom today is 50% more likely to die in childbirth than her own mother was," Harvard Medical School obstetrician Dr. Neel Shah said in a statement.

For every 5 mothers who die during pregnancy/childbirth, 3 lives could be saved w/ better care. New data from… https://t.co/3I7iZwbRba
— Cheryl Preheim (@Cheryl Preheim)1557264405.0

The American College of Obstetricians and Gynecologists has recently released a new guideline stating black women are the most at-risk.

In the guidelines, it states that 12 weeks post-delivery, a woman should have a heart-risk evaluation performed. 40% of women don't have this done, and pay issues/price could be one reason.

In the past, infections and bleeding complications used to cause death when it came to pregnancy.

But now, in 2019, the main issue is heart-related problems. If a woman isn't able to get the proper medical appointments, she is severely at risk.

"Pregnancy is really a stress test because of the extra blood the heart is moving for mom and child," explained Dr. James Martin, head of the guidelines panel. Because of this, pregnancy can reveal unknown problems or even cause new ones.

According to the CDC, a third of the deaths occur during pregnancy, a third were during birth or within a week of birth, and then the rest happened up to a year post-birth.

For every five mothers who have died in the United States from childbirth, three could have been saved.

If they had received better medical care and attention, their deaths could have been avoided, says the CDC.

There are significant racial disparities in maternal mortality rates in the U.S. Black women in this country are th… https://t.co/PvgxUUNeMw
— SELF (@SELF)1533915009.0

Here is the story of Shalon Irving, a CDC researcher who knew better than anyone that black women are 3 times m… https://t.co/jbh3w3VlVc
— Renee Montagne (@Renee Montagne)1512736201.0

The maternal mortality rate fell roughly 44% between 1990 and 2015, globally, reports the World Health Organization. But the United States has a different statistic.

Many say there are a few possible medical factors: the growing C-section rates in the United States, as well as increasing rates for obesity, heart disease, and diabetes.

Dr. Lisa Hollier, president of the obstetrician's group, explained that this is due to racial bias they experience when getting medical care, as well as the doctors not recognizing risks like high blood pressure.

A very real and grave issue

One woman is an example of how horrifying this issue really is. Stacy Ann Walker was 29, healthy, and pregnant reports Business Insider.

Eight years ago, she was expecting her first child.

But then, "the unimaginable happened and left both of us fighting for our life," Business Insider reports.

Brushed off by a doctor

Walker explained that she was brushed off by her doctor. She reported that she was told having shortness of breath, swelling in her legs, and exhaustion was just "normal."

Walker's baby developed severe, life-threatening complications during pregnancy. She needed an emergency C-section, and her baby weighed less than three ounces at birth.

Walker's own health was jeopardized.

Post-birth, Walker developed heart failure and required surgery. "Never did I think my life would be in danger," Walker said, speaking at a news conference, held by the obstetrician's group regarding the guidelines.

The CDC has done extensive research regarding maternal deaths and medical complications.

Using death certificates, the CDC looked at roughly 3,000 pregnancy-related deaths that happened between 2011 and 2015.

1/ Proud to be member of the @CDCFound National Partnership to Eliminate Preventable Maternal Mortality Our new re… https://t.co/6y3uHEDbcr
— neel_shah (@neel_shah)1518203953.0

Researches also did a study, pinpointing 13 states and 250 deaths. From this specific investigation, researchers ruled that about 60% of those deaths were preventable.

There are many issues and problems that lead to death. The report explains that everything from the mistakes of doctors and medical professionals to the difficulty that some women face getting proper housing and healthy food contributes to pregnancy-related death.

A need for change

The University of North Carolina's Dr. Alison Stuebe explained that the report points toward the fact that doctors and patients need to be educated about the risks for new moms. Medicaid health coverage also needs to be expanded, so that medical and postpartum care is available for mothers after they give birth.

CDC is seeking to improve #MaternalHealth by ensuring there is robust data and improving access to quality care, sa… https://t.co/fQTuGnIssS
— SWHR (@SWHR)1557947281.0

The CDC is calling out health care providers and saying that they need to do more to ensure the safety of mothers.

The CDC's report also said that states and communities can do more to take action against the obstacles that are in the way for women getting good housing and transportation. The report also called for developing policies that help high-risk women receive proper and adequate care at hospitals.

The CDC director is speaking out

A report from the CDC found that: —black women were 3.3 times more likely than white women to suffer a pregnancy-re… https://t.co/IKpmBAfYcQ
— The New York Times (@The New York Times)1557255602.0

"Though most pregnancies progress safely, I urge the public health community to increase awareness with all expectant and new mothers about the signs of serious pregnancy complications and the need for preventative care that can and does save lives," explained CDC Director Robert Redfield.

"We as a society do a terrible job of taking care of mothers after the baby comes out," Dr. Stuebe said.

It is crucial to understand the devastating facts and reality.

Dr. William Callaghan, Chief of the Maternal and Infant Health Branch in the Division of Reproductive Health at the CDC, told the National Geographic, "There’s all kinds of implicit bias, racial and unconscious bias about somebody who presents with a condition or symptoms that look a lot like something ordinary but isn’t. These judgment calls can occur around race. What they say is judged in a way that is based on their racial background."

Lives must be saved

In August 2018, Washington DC Mayor Muriel Bowser signed an agreement with George Washington University Hospital. The agreement would create a state-of-the-art hospital and trauma center, as well as have a maternity ward. The hospital would be in Ward 8, which is one of the poorest areas of Washington DC. The National Geographic reports that construction is set to begin in 2020, with the hospital opening in 2023.

A need for action

Bowser told National Geographic, "With this issue, we have to call on the knowledge, and the voices and the energy of our communities to save lives. We can’t wait for the next study or report." The lives of mothers - particularly mothers who are women of color - depends on it.