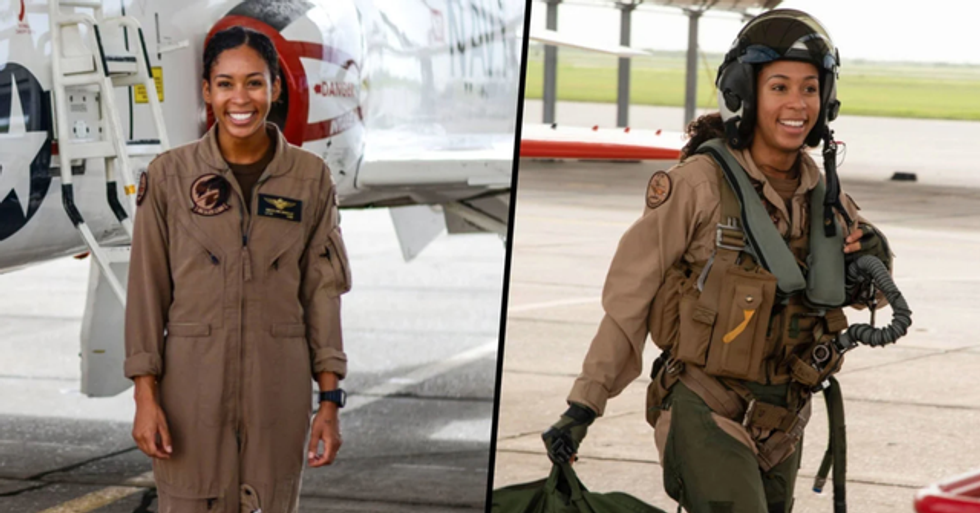 Earlier this month, the US Navy graduated their very first black female fighter pilot, and, today, a very special ceremony is set to take place...

Earlier this month, history was made in the U.S Navy.

A young woman became the first-ever black female US Naval Officer to qualify as a tactical pilot.

Now, it will come as no surprise to most of us - particularly us women - that there has been an ongoing gender bias across all sectors of the military.

For centuries, the military has been overwhelmingly dominated by white males.

So, when it was announced that a black female fighter pilot had graduated...

After nearly 110 years of naval aviation...

Sharing 2 photos of Swegle standing with her aircraft, they wrote: "BZ to Lt. j.g. Madeline Swegle on completing the Tactical Air (Strike) aviator syllabus. Swegle is the USNavy’s first known Black female TACAIR pilot and will receive her Wings of Gold later this month. HOOYAH!"

And is currently assigned to the Redhawks of Training Squadron (VT) 21 in Texas.

The young woman has always had a passion for aviation.

"My parents raised me and they told me that I can be whatever I wanted to be," she said, as she recalled going as a child to see the elite Blue Angels, who are among the Navy's most skilled pilots. "They were just so cool I loved them. I love fast planes."

She admits that her training was grueling.

"It was crazy to be in such a higher performance aircraft," she said. "I was really excited on the takeoff, like feeling the exhilaration and getting thrown back in the seat a little bit."

And, of course, Swegle had her doubts along the way.

"It took a lot of fighting the aircraft to figure out how it was going to perform," she explained. "Looking back it's amazing to think about where I started and I had never been in an airplane before so, it's just one step at a time. It's really cool to think of all of the things that I've done now which I'd never thought that I'd be able to do."

But she conquered every obstacle in her path...

And came out on top. On her achievement, she said: "I am really honored that I get to wear the wings and get to fly planes and call myself a pilot."

It is unclear what Swegle's next career move will be...

But, as a graduate of the TACAIR training program, she will likely move on from training aircraft to Navy tactical planes, like the F/A-18E/F Super Hornet and F-35C Lighting II Joint Strike Fighter.

The Vice Chief of Information Rear Adm. Paula Dunn was one of the first to offer her congratulations.

Taking to Twitter, she shared photos of Swegle alongside the caption: "Very proud of LTJG Swegle. Go forth and kick butt."

He began: "To show up here at this level, you need to be a top performer and then you have to continue to perform while you're here. These are the best pilots in the world that are trained here, the very best."

He then went on to explain how Swegle is up there with the best of the best.

"She, just like all of her fellow Wingees, are at that standard of excellence and they're going to go out and make all of us very proud."

Very quickly, the rest of the internet started to send their messages of congratulations.

Many also noted how Swegle was paving the path for the next generation of military women.

Some Twitter users reflected on their own experiences with sexism...

After the ASVAB, I was naively excited by the chance to fly jets (mom worked at Pratt, dad flew as a hobby) and fel… https://t.co/MHGZqDa5kw
— Christine Herron (@Christine Herron)1594479043.0

Especially within the world of aviation.

Swegle is an icon in both the aviation community and the black community...

And she has proven that you can accomplish anything, regardless of your gender or your skin color.

The big day has finally arrived.

Lt. j.g. Madeline Swegle is set to receive her "Wings of Gold"!

For more incredible aviation stories, keep scrolling to read about the pilot who was once rejected because of a devastating medical diagnosis...
20%