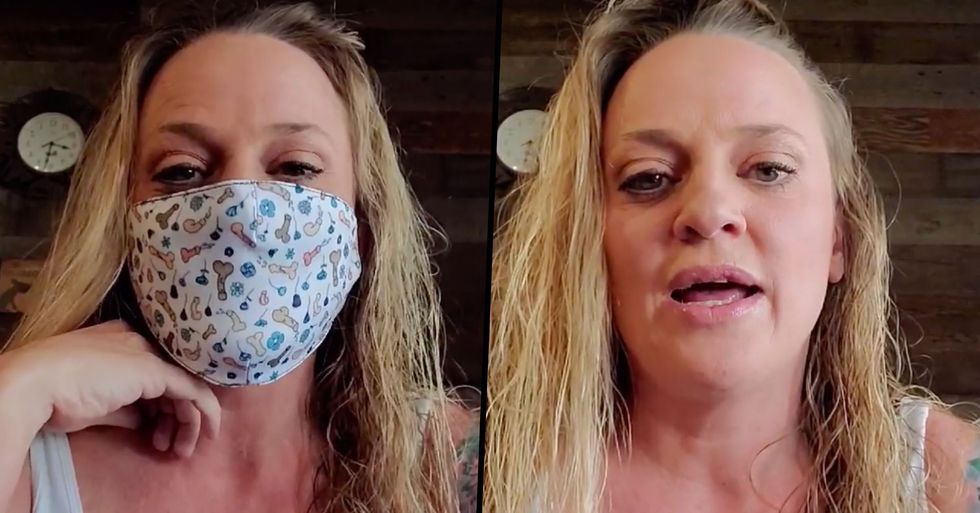 A woman has gone viral for the genius "face mask" trick she uses when keeping unmasked members of the public within a safe distance...

Here in the US, it is becoming mandatory to wear face masks in all public places.

As we begin to ease out of the lockdown restrictions imposed as a result of the coronavirus pandemic, extra measures are being taken to stop that inevitable second spike.

In some states, it has already become compulsory to wear a face mask at all times...

And many retail stores are requiring customers to wear a mask, as they are on all forms of public transport.

However, not everyone has been abiding by these regulations.

So many people are getting themselves in trouble for refusing to wear a facemask... All because they find them "uncomfortable."

Many argue that "they can't breathe" while wearing a facemask...

And, subsequently, they end up not wearing any sort of face-covering at all.

This kind of arrogance can be incredibly detrimental to the rest of us...

And could very well result in a second lockdown.

Now, none of us want that to happen, do we?

So, in the meantime, the rest of us are having to come up with our own methods of protecting ourselves from those who are ignorant enough to ditch the masks.

And now, one woman has come forward with her quite simply genius method of keeping mask-less folk at an arm's length...

Mindy Vincent is a wicked genius.

The Utah based mom came up with an ingenious - and slightly x-rated - hack that keeps those without a face covering at bay.

Now, from the get-go, Vincent was in dire need of face masks.

She runs the non-profit organization, the Utah Harm Reduction Coalition, which provides services to those battling with substance abuse.

She started the non-profit in 2016, shortly after her own sister died from an overdose.

"It changed my whole world," she told CafeMom. "I am a person who has recovered from a substance use disorder, and I had been working in the field of addiction for several years when my sister passed away.

But her organization was set to suffer during the pandemic.

She explained in a viral vlog post: "We provide syringe exchange services, and we serve the most vulnerable people, and we can’t not serve them especially during some kind of pandemic. So I needed some kind of face protection for my staff."

Vincent needed copious amounts of disposable face masks for both her staff and her patients...

And she also needed to raise money for her nonprofit to survive the pandemic.

But one day, her "genius" son devised an idea.

Why not make her own face masks as a way to both raise money and wear as protection when out and about?

She originally ordered the adult-themed protective gear from China "because they would reach the United States the fastest."

But, demand proved to be high.

Set at $20 a piece, Vincent claims that her first batch of genitalia-emblazoned masks "sold out within an hour," so she had to get to work recreating them from home.

She is now working on another set of masks with the remaining batch of locally sourced fabric...

And it didn't take long for her post to go viral.

And, of course, she shared a handy tip on how to use the unusual masks effectively.

She wrote: "I wore this to Walmart and PetCo today. When someone tells me my mask has penises on it, I kindly let them know this is how I determine they are too close, kindly back the f*** up."

You heard her, folks.

If they can see the print on the masks, they are too close. Take note.

You can watch her full video here.

For more on weird and whacky face masks, keep scrolling to see the matching face masks you can buy for you and your dog...