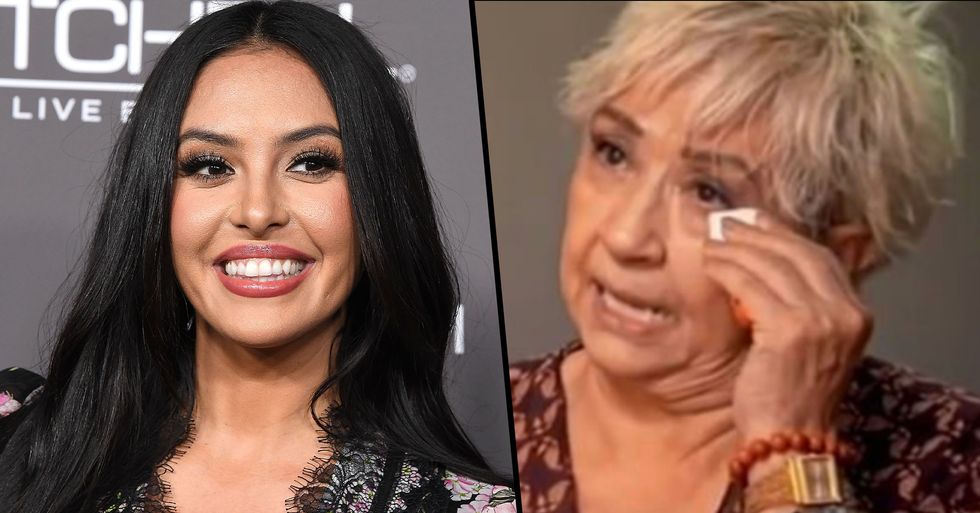 Vanessa Bryant has spoken out after her mom, Sofia Laine, made some highly detrimental claims against her in a tell-all interview...

Allegedly, Vanessa kicked her own mother out of her house in the wake of her husband, Kobe Bryant's death.

In an interview for the Spanish language show, Univision's El Gorda y La Flaca, Sofia was visibly emotional as she made the shocking claims.

It was a truly bizarre interview...

And, as Sofia openly wept on television, people couldn't quite believe what they were seeing.

Understandably, the internet has been alight with speculation ever since the interview aired...

And now, Vanessa has finally responded by shutting down every claim made by her mother.

Now, as you will all be aware, it has been an unbelievably challenging year for the Bryant family.

On January 26th this year, the world was shocked when the news of Kobe Bryant's death hit the headlines.

The NBA legend was traveling with his thirteen-year-old daughter, Gianna, in a private helicopter...

For reasons that are still to be confirmed, Kobe's helicopter suffered some sort of malfunction...

Causing it to crash in Southern California.

No one on board the flight survived the crash...

Kobe and Gianna, alongside Orange Coast College baseball coach, John Altobelli and his wife and daughter, died in the aircraft.

It was the most devastating news.

And would often accompany Kobe to basketball games. In fact, from childhood, Gianna would participate in the team warm-ups.

The thirteen-year-old was reportedly a true talent...

Heartbreaking footage from the aftermath of the tragedy was quick to circulate online...

This clip, which was uploaded to Twitter, shows smoke emerging from the crash site as emergency services respond to the devastating incident.

Kobe was a beloved presence in the celebrity world - and he remains horribly missed today.

As for Vanessa and the girls?

Well, they've been trying to get on with their lives as best as they can.

It was an unimaginable loss for the family.

Vanessa lost both her husband and her daughter, while the girls lost their father and their sister. In the aftermath of the accident, Vanessa wrote on Instagram: "I’ve been reluctant to put my feelings into words. My brain refuses to accept that both Kobe and Gigi are gone. I can’t process both at the same time. It’s like I’m trying to process Kobe being gone but my body refuses to accept my Gigi will never come back to me. It feels wrong."

Vanessa and the girls have needed the support of their family more than ever before...

So, of course, it came as a huge shock this week when Vanessa's mother, Sofia Laine, gave a very public and very revealing interview against her daughter.

Now, Vanessa has always had a close relationship with her mom...

And it was believed that Sofia was close to Kobe, who didn't have a great relationship with his own parents.

But, apparently, Sofia and Vanessa have suffered a major fall out...

Resulting in Sofia being kicked out of the shared house. After Kobe's death, a source claimed that Sofia was helping Vanessa and her grandchildren, and had been living in one of the owned Newport Coast properties.

But, for reasons unbeknown to us, Vanessa wants her out.

Apparently. "She told me, 'I need you to get out of this house.' She also told me that she wanted her car and she wants it now,'" Laine cried to interviewer Dave Valadez.

In the interview, Sofia also gave away a number of personal family details...

Including the location of Kobe's remains.

Of course, going public with private family affairs is a huge betrayal...

And people are not impressed with Sofia's "disrespectful" interview.

What kind of woman outs her grieving daughter?

It truly is a shocking move.

Reactions have come pouring in...

And now, Vanessa has responded to the allegations...

And she completely tore into her mom in the process.

The widow has been forced to defend herself.

In a statement to the TV station, Vanessa said: "My husband and daughter passed away unexpectedly, and yet my mother had the audacity to do a television interview speaking negatively of me while shedding tears for a car and a house that were not in her name."

She fully denied all of her mother's allegations...

And went on to suggest that the whole thing has been planned and calculated to make her look bad. "She has removed all her diamond jewelry, emptied the apartment I provided, and put away the furniture to make it look like she doesn't have my support."

She also dismissed any claims that her mom had been supportive during the past year.

Vanessa stressed that her mom "has not been physically present or emotionally supportive" of her or her 3 other children as they adjust to life without Kobe and Gianna.

The whole situation has been a painful blow for Vanessa.

"My husband and I have supported her financially for the past twenty years, and continue to do so, in addition to her monthly alimony. Now I see what is most important to my mother and it's more than painful. I hope that everything that is coming out about our personal relationship ends here." Let's just hope Vanessa and her daughters can finally get the peace they deserve.