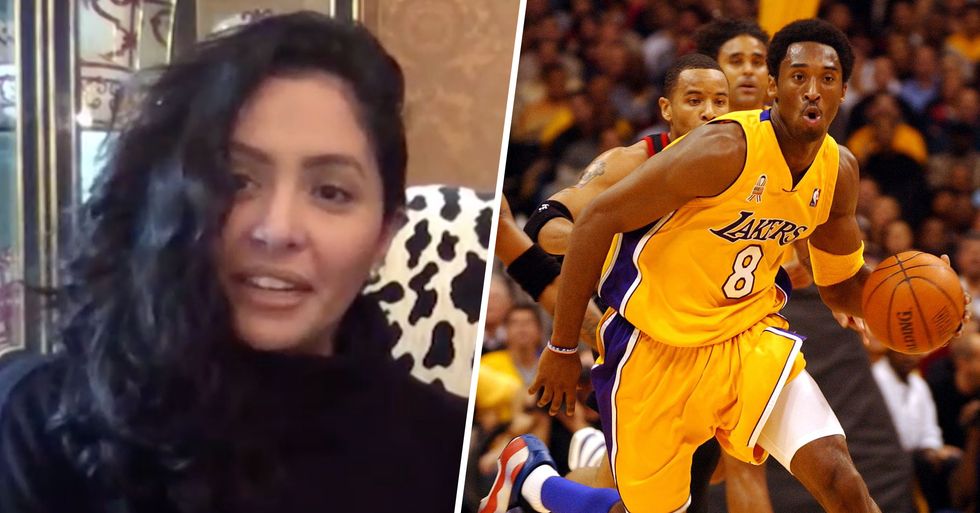 The internet's heart was broken when it was revealed that legendary NBA player, Kobe Bryant, had died in a helicopter crash earlier this year.

Tributes poured in for the star, and now sadly after his passing, he has received the "pinnacle of his career" by being inducted into the Basketball Hall of Fame.

Vanessa and his daughter Natalia have given the most heartwrenching speech on behalf of Kobe's greatest achievement.

By his second season, Kobe had been named an All-Star. Scroll to the end for Vanessa's heartwrenching interview...

The pair were both just 17-years-old but quickly fell in love - becoming engaged after only six months of dating. It's clear by her interview, how deeply she cared for Kobe. Keep scrolling to watch...

Kobe left behind his wife and their daughters - Natalia and Bianca, and their newborn, Capri. Natalia joined Vanessa for the interview, keep scrolling to watch...

Gianna, aged 13, tragically died in the crash with her dad, on their way to the Mamba Academy for basketball practice, nearby Thousand Oaks.

Kobe Bryant will be a first-ballot enshrinement into the Naismith Basketball Hall of Fame class of 2020. "Expecte… https://t.co/Pm47TFNLE2
— Shams Charania (@Shams Charania)1580137081.0

The Naismith Memorial Basketball Hall of Fame. It was just announced that Kobe is set to be inducted into the Hall of Fame ahead of the usual election process.

He was nominated last December and will be inducted in August.

Bryant will be part of standard Hall of Fame screening process on Wednesday, with finalists in February at All-Star… https://t.co/XUkY5s3Ttz
— Shams Charania (@Shams Charania)1580143861.0

Basketball fans have been deeply touched by this move. Many have been leaving tributes for both Kobe and his daughter.

Vanessa Bryant shared how proud she is of her husband.

Vanessa sat with daughter Natalia, as they both held back tears talking about Kobe's biggest accomplishment.

Kobe will be inducted as part of the class of 2020.

Vanessa says this is the pinnacle of Kobe's twenty-year-long NBA career with the Lakers.

She was understandably emotional about the news.

Vanessa said: "It's an incredible accomplishment and honor, and we're extremely proud of him. Obviously, we wish he was here with us to celebrate, but it's definitely the peak of his NBA career and every accomplishment that he had as an athlete was a stepping stone to be here."

His team also shared their thoughts.

The Lakers praised Kobe, saying: "All of us can trust that this basketball Hall of Fame honor is one Kobe would, and will, deeply appreciate."
For more on Kobe tributes, scroll on...