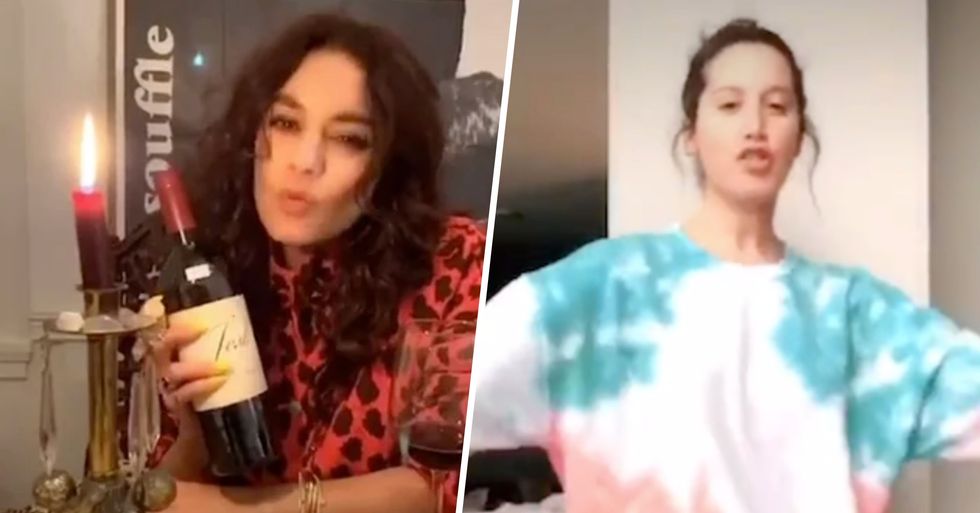 While on lockdown in her home in LA, actress Vanessa Hudgens reunited with friend and co-star, Ashley Tisdale, to sing and dance alongside to an iconic High School Musical hit.

Keep scrolling to watch the nostalgic video for yourself...

The coronavirus has hit us hard.

The deadly coronavirus, or COVID-19, as medical experts are referring to it as, has taken our planet hostage, and is showing no signs of letting go anytime soon.

Just for a bit of background...

What exactly is COVID-19, and just how dangerous is it? According to the World Health Organization, COVID-19 is a new strain of coronaviruses that had not been previously been identified in humans.

And now, 3 months on from the outbreak, nearly every major country in the world has been infected by the virus, with some of the worst affected being Japan, South Korea, Russia, Italy, Iran, and Spain.

And people all over the world have been frantically trying to protect themselves from getting infected.

Whether it be donning facemasks...

Or taking extra sanitary measures when out in public, citizens all over the world are making a valiant effort to prevent further spread of the virus.

And one of the main methods adopted by people is total self-isolation.

At first, people with symptoms were advised to stay isolated in their homes for at least a week. But, now the virus is getting out of hand, everyone has been called to self-isolate and distance themselves from crowded, social situations.

Thousands of people are currently in isolation...

And, while many have the luxury of being able to work from home, others are finding themselves stuck in the house with very little to do.

And celebrities aren't immune from the looming prospect of isolation either.

A number of famous faces have revealed that they themselves have been diagnosed with the deadly virus and are now in quarantine, including Tom Hanks and Idris Elba.

And, evidently, some famous faces are struggling with the boredom of isolation more than others...

High School Musical's Vanessa Hudgens has isolated herself in her Los Angeles home and has been finding some pretty amusing ways of keeping herself entertained... With this makeshift makeup tutorial, for example.

The actress has been frequently taking to social media to vent her quarantine woes...

Where she tells her followers that she's "already bored" and is "playing with makeup".

And she's been having an awful lot of fun on TikTok.

Hudgens has been sharing a number of silly videos of her working out and dancing around her bedroom... Which we can all relate to while locked down in our homes, right?

But her most recent boredom-fuelled post has delighted High School Musical fans far and wide...

Because she's rebirthed an iconic HSM song with one of her fellow cast members.

Though their characters were sworn enemies on the show, the women are actually close friends in real life.

So, during this difficult isolation period...

The women have stuck together to keep themselves entertained... And what better way to do it than bringing back some of the old HSM bangers?

Hudgens shared a video to TikTok which showed her and Tisdale reciting the iconic hit, "We're All In This Together".

While Hudgens could be seen sitting at her table with a bottle of red wine...

Tisdale opted for a more casual tie-die tracksuit set. But, regardless of their different styles, they both completely smashed the dance moves to the song and lipsynced along perfectly.

Though be warned: It'll give you major nostalgia. Because of the strict lockdown that the world is currently experiencing, many TV shows and movies have been postponed. Keep scrolling to find out which ones...