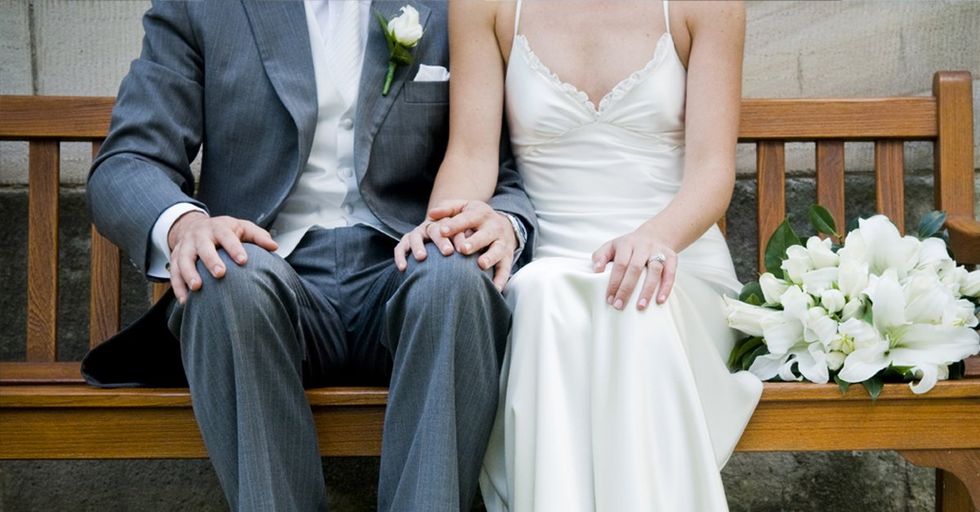 Vegans and vegetarians get a lot of hate. I was a vegetarian for 10 years and the number of times some "hilarious" friend or relative waved a piece of bacon in my face and said "mmm don't you want this?" is truly uncountable. (Jokes on them, I don't even like bacon.)

Most vegetarians and vegans just want to live their lives, politely asking for veggie burgers at backyard barbecues and quietly settling for salad and tortilla chips when the host inevitably forgot to provide a non-meat option. Seriously. Vegans and vegetarians are all around you, never saying a word. There might even be one in the room with you right now, somehow not wearing a "meat is murder shirt" and throwing paint on anyone they suspect might be wearing boots trimmed with real fur.

For some reason, people want to cast vegans and vegetarians as self-righteous activists who think they are better than those who dare bite into a corn dog while internally crying because they will never get to indulge in the sweet taste of state fair food – Deep fried Oreos are usually vegan, though, don't worry!

The truth is, most vegetarians and vegans respect that diet is a personal choice, they don't really care much what anyone else eats, and they really do enjoy lentils.

But of course, there are some that give the rest of them a bad name.

Her recent post on a vegan Facebook group went viral. The post has since been deleted and the poster is anonymous (no it's probably not your vegan cousin, so leave her alone).

The bride-to-be wrote that she was banning all non-vegans from her wedding.

Yeah, you read that correctly. She wasn't just banning all non-vegan food from her wedding, which would have been fine since it's her wedding and she's the one paying for people to eat there.

No, she was banning anyone who didn't also follow her vegan diet.

The post read, "When your ‘family’ tries to guilt trip you into letting them come to your fully vegan wedding, even though they’re omnivores." Then it had two laughing emojis.

It went on, though.

"Just for some context, some family members were told they are not invited to my wedding because we don’t want to host murderers. Our wedding is supposed to be one of the happiest days of our lives."

That may have been going just a smidge too far.

You might think since she posted this in a vegan Facebook group, she would be met with support from all the other insane vegans who also want to ban their meat-eating family and friends from all their events.

Yeah, not so much. Because, again, vegans aren't insane (despite what the above stock photo implies). They just don't want to eat animal products.

The vegans in the group were shocked, too.

One person wrote, "As a vegan, this is messed up, … you can’t go around calling your family murderers!" Yeah, that's not really a great way to make family reunions fun.

People were on board with a vegan menu but...

"I totally understand serving vegan food exclusively, that makes sense … but banning people and calling them murderers is just ridiculous," one person said.

Some vegans in the group pointed out that a wedding is a great time to show off vegan cooking.

Why not serve a vegan menu and show your family how good vegan food can be instead of banning them? Show don't tell! It's the first rule of writing and hereby I now declare it the first rule of hosting a vegan wedding.

And people may not even be that disappointed with an all-vegan or vegetarian wedding.

There isn't great data on the subject, but it's estimated that in the US there are about 7 million vegetarians and 1 million vegans and those numbers are growing.

And many people who do eat meat are choosing to eat less meat for environmental reasons.

So more than likely, most guests would be fine with one vegan meal at a wedding. Especially since it would be a free meal, too.

Someone wrote that she'd been to a vegan wedding and it turned out well.

They said, "My cousin had a perfectly delicious vegan buffet at her wedding and all the carnivores had a great time." Proof that vegans and omnivores can live in peace!

The bride tried to explain her position further, but it didn't go so well.

She wrote, "They have consistently attacked me and my partner just for being vegan." Ok, so that is annoying. Like my meat-waving relatives, I know how frustrating it can be when people don't respect your dietary choices just because they don't agree with them. But those types of people should be banned from your wedding because they're just jerks, not because they're omnivores.

Her next statement definitely didn't make things any better.

She wrote, "When I broke the news to them, all I got was attacked because I don’t want the weight of having people that still kill animals (the very beings we are trying to protect) at my wedding on my conscience."

Let's take a step back here.

Before we trash an anonymous bride on the internet too much, let's all remember that planning a wedding is very stressful.

We all lose our minds a little when we are trying to plan a party for 100 plus guests and make all of those guests happy.

But, look, here's the thing: telling your guests they can't come because they are murders only complicates an already grueling process.

Why do that to yourself when you could merely be tortured by trying to figure out how many people who neglected to RSVP might just show up anyway?

Or try to figure out how to keep your aunt Mabel away from her ex Phil and his new wife Kim without disrupting the cocktail hour.

The bride said she wasn't sorry.

She wasn't going to compromise her ethics in order to have her family at her wedding.

To be clear I compromised the heck out of my ethics at my own wedding.

In the form of "I do not believe it is ethical to be charged an extra 500 dollars on top of the $5000 venue fee for a bathroom cleaning fee, I think cleaning the bathrooms should be implied in the original fee."

But we all have to make sacrifices.

Although, not inviting anyone to your wedding would be a really good way to save money.

Maybe that was her plan all along?

Kick anyone who isn't vegan out and then you spend your extra money on a honeymoon in a fancy hotel in Tahiti?

But wait, there was a twist!

A surprise ending you did not see coming!

One of the woman's family members was in the group!

She wrote in the comments section of the post, "What’s the most f***ed up thing you’ve ever experienced? I just got uninvited to a wedding that I was meant to be a bridesmaid for because I’m not vegan."

So the bride even kicked out the wedding party?

Who is actually going to be attending this wedding at this point?

Just her fiance and an audience of freed laboratory testing animals?

Hopefully, her fiance is vegan.

The bride has since deleted the post, so maybe she's changed her mind.

Or maybe she's currently eloping, which to be honest is probably the best way to get married anyway.

But at least she's not as bad as the bride who asked everyone coming to her wedding to pay them $1,500.

Now, that story was wild.

If you have a minute, go ahead and read this post.

This bride makes the vegan bride who just wanted to kick everyone out of her wedding seem reasonable.

Maybe we should all just agree to chill-out when it comes to weddings?