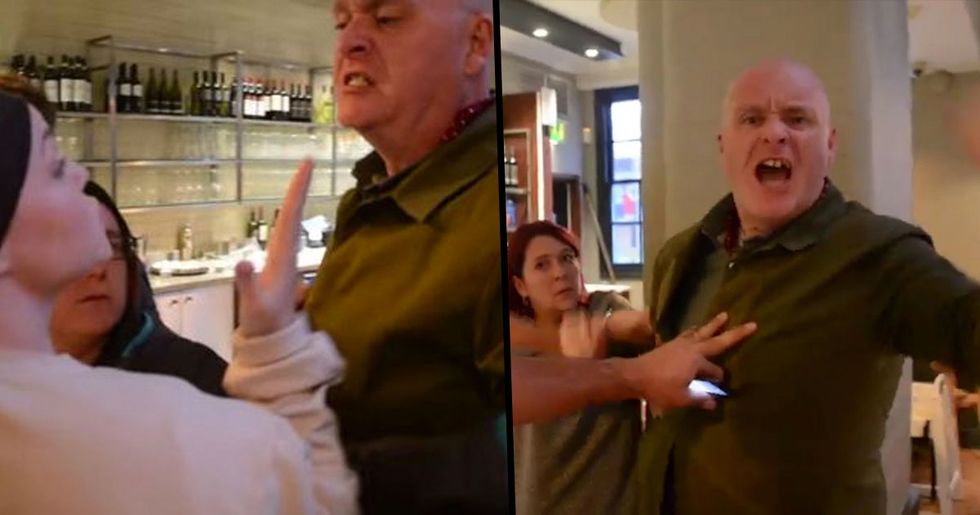 The world of "veganism" seems to be taking over many people's lives as well as the headlines. It seems as if some vegans really know how to take things a little too far in their bid to make the world a more animal-friendly place.

I'm all for "animal rights" and all that good stuff, but a girl's also gotta eat! If veganism manages to take over the world, it doesn't seem like we're going to be able to. This group of vegans stormed into an Italian chain restaurant and staged a protest. However, things took a violent turn when a man approached one of the protesters and swung for her, punching her directly in the face. While veganism doesn't sit well with me, neither does violence.

I mean, we get it, sustainable world, animal cruelty, and all that good stuff we should be caring more about. That's all good and well.

But when you get stories such as these...

It leaves you questioning your sanity.

Remember when a bunch of angry vegans almost got slaughtered?

I'm not joking. An animal rights activist group named "Direct Action Everywhere" decided that they would storm into a slaughterhouse in order to save some caged chickens.

It's all fun and games breaking into private property to unleash a group of angry chickens onto the world, but chaining yourself to a machine with a guillotine attached to it might not have been the brightest idea.

Whoever came up with that needs to be fired on the spot.

The activists stood alongside the machine and, one by one, tied their necks to the conveyer belt, thinking that would stop the process, but little did they know what they'd actually gotten themselves into.

The machine continued moving, dragging the activists by their necks to their potential deaths.

One man, who was choked by the machine, expressed his thoughts about the situation: "It was almost decapitating my head from my neck. I was feeling my life leave my body, as I was struggling to get out of that lock."

Thankfully, they only suffered minor injuries...

But this was a grave warning to those who are willing to put themselves in danger just to stand up for what they believe in.

But being "vegan" is a lifestyle choice.

The operative word in that sentence is choice. No one should feel like they are having it shoved down their throats, which many do feel when it comes down to it.

However, Direct Action Everywhere doesn't see it that way because they're back at it again.

However, this time, they picked a safer location to stage a more tradition protest. Yes, it involved posters and chanting.

The footage shows a bunch of campaigners storming into the Italian restaurant.

They were carrying pictures of animals with the words: "I want to live," on them - not direct quotes from chicken or sheep.

While it would put you off your food to see these animal-goers talk about slaughter and animal guts...

No one was expecting what took place next.

At first, everything seemed okay, well as "okay" as they could be...

There was a lady with a megaphone shouting, "it's not food, it's violence!" Just your typical day in Brighton, England.

However, when an angry-looking man approaches the lady, things take a nasty turn.

Soon an altercation between the bald man and the young lady ensues in which he shouts: "You're scaring these people, f*ck off now." A middle-finger towards the protesters but what do you expect when you've stormed into a restaurant while people are trying to enjoy a nice dinner?

While veganism doesn't sit well with me, neither does violence.

He then proceeds to push the lady, and as she turns back to confront him, he wings his fist and gets square in the face.

After that, the camera gets a little blurry with movements...

But we can see a waiter and other customers/protestors holding him back before he attacks her again.

If he didn't look angry enough before, he's seething now.

I don't understand why hands had to be thrown in this situation. Why did he feel the need to punch her in the face just because he didn't like what she was doing?

It's not your responsibility to drag them out, because legally, they're not breaking any laws.

However, it doesn't make it right. Punching her though, made it a hundred times worse.

I understand that some vegans are passionate about the issue...

But that doesn't mean forcing the lifestyle on others, as I have mentioned previously. Direct Action Everywhere are known for their protests all around the UK, but especially in Brighton which has seen the number of campaigners rise in recent years.

The angry group was then ushered out of the establishment...

But obviously they wouldn't leave Pizza Express without making their voices heard. They chanted: "What do we want? Animal liberation! When do we want it? Now!" all the way down the street. A classic. A spokesperson for Direct Action Everywhere said this after the event unfolded: "Today, whilst bringing this message to diners at the chain restaurant, we were violently attacked. It is not surprising that those consuming violence are quick to partake in it too." Okay, we'll give you that one because it did happen. It doesn't, however, make it right that you stormed a restaurant.

After the incident, the activists returned to the town hall where a bigger animal rights protest continued.

The police are currently investigating the exchange at Pizza Express but so far, there have been no charges. And if you're already shocked, prepare to have your socks completely blown off because here's a story of an activist from the other side of the vegan spectrum who thought it would be a good idea to snack on a squirrel in front of a bunch of enraged onlookers.