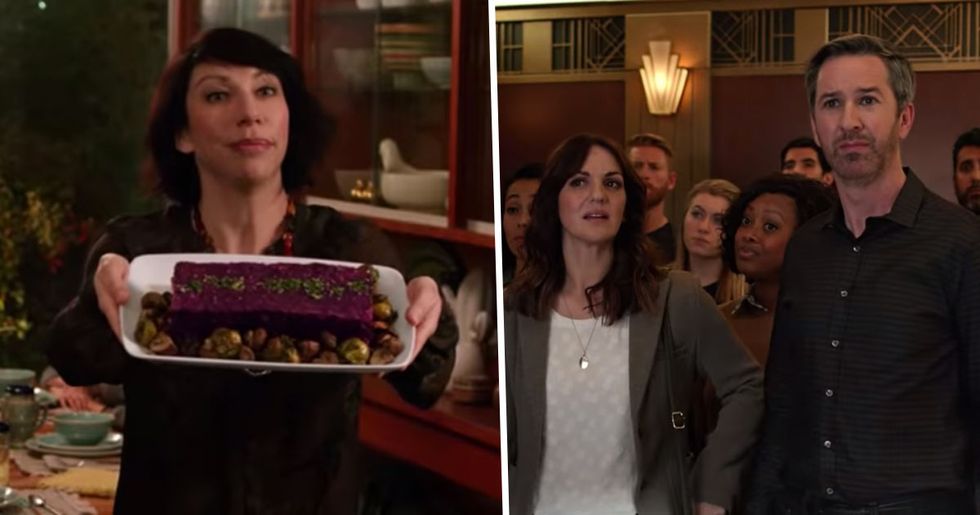 Vegans across the globe have tweeted their anger at the recent Hyundai Super Bowl advert that compared a vegan dinner party to root canal surgery, jury duty, being stuck in the middle seat on a plane and having 'the talk' with your teenage child.

Starring Jason Bateman, this commercial was supposed to promote how enjoyable purchasing a Hyundai vehicle is but viewers were much more concerned with the brand's blatant mocking of vegans.

Although some were just as fast to jump to the car manufacturer's defence and state that those who complained should get a life and a sense of humour.

Check out the video for yourself and decide if you think Hyundai are vegan-bashing or if our plant-eating friends are just too sensitive.

There has been a 600% increase in consumers who identify as vegan over the past few years and this new (ish) trend doesn't look like it will be slowing down anytime soon.

It can be a very healthy lifestyle choice.

Any diet that advocates eating lots of fruit, vegetables and plant-based foods is got to be a good thing right? Yes, but beware, becoming a vegan doesn't automatically make you healthy. It is possible to eat an unhealthy vegan diet, rich in processed foods.

Miley Cyrus is very vocal about her support for veganism.

Miley is a vegan herself (since 2014) and often uses her position as a celebrity to promote her plant-based beliefs. You may remember her high profile work for PETA who asked "Is Miley Cyrus the Veganest Vegan to Ever Vegan? "

But for some reason vegans still get mocked mercilessly.

Apparently vegans sit around eating grass all day and pushing their extremist lifestyle onto others. Don't even get us started on them ordering food in a non vegan restaurant!

Piers Morgan is a known hater.

To be fair, Piers hates a lot of things but he does seem to have an unnatural amount of anger for vegan food, especially Greggs vegan sausage rolls. We thought they were ok actually.

American chef Anthony Bourdain didn't particularly like them either.

“Vegetarians, and their Hezbollah-like splinter faction, the vegans ... are the enemy of everything good and decent… https://t.co/m5HmJLJDPg
— Jason Young (@Jason Young)1543766483.0

Who are we to argue with the great man?

Some even want to kill them.

Food editor William Sitwell responded to a freelance journalist pitching a series of plant-based recipes with the reply; "How about a series on killing vegans one by one." Perhaps a slightly aggressive response to an innocuous email.

But why all the hate?

So called militant vegans don't really seem to help their cause. Spraying fake blood at butcher displays is never going to encourage people to take your side now is it? (This happened in France btw).

And comparing meat eaters to child abusers will not do any good either.

PETA made an ad that suggested people who feed their kids meat are child abusers. Telling people they are bad parents is never going to win them over now is it?

Some people just fear the unknown.

Veganism is quite a dramatic lifestyle change and some people just can't imagine a life without burgers and bacon.

But whether you are a vegan or not; should brands be mocking any lifestyle choice?

Surely companies want people from all walks of life to buy their products? Alienating any group means you will make less money doesn't it?

But that is exactly what Hyundai did with their recent Super Bowl ad.

This controversial ad showed Jason Bateman as an elevator operator delivering people to horrible and unpleasant experiences. One being a vegan dinner party.

PETA were quick to tweet their feelings on the matter.

Somewhat surprisingly, PETA kept their cool and responded with a very calm and collected statement to the ad mocking their beliefs.

What about sustainability Hyundai?

Respectful Living were keen to point out about the importance of sustaining our planet. They won't be buying a Hyundai anytime soon.

Would people find it so funny if it played out like this?

Why the need to mock any group in society? But especially one whose only apparent goal is to protect and safeguard the rights of animals. This video has definitely put us off our bacon sandwich.

Like it or not, this generation and probably even more so the next, are going to become more interested and passionate about health, the environment and animal rights issues. It's just the way the world is going. And Hyundai, you are in danger of being left behind.

They are losing customers left, right and centre.

You know it's bad when someone would prefer to own a Volvo rather than be associated with your brand.

It's a good point though. The more health conscious among us are probably more likely to live longer. Plus they will have lots of extra money that they didn't spend on steak, booze and unhealthy living.

And what's with the beetloaf bashing?

Beetroots are sweet, tasty and delicious. Although to be fair, Hyundai have made the dish look as about as appetizing as a wet, purple sponge.

I mean it's even in the name!

The Super Bowl was clearly invented with vegan superfood bowls in mind. You've missed a trick there Hyundai.

Some quick damage control by Hyundai.

We are sure you do Hyundai. Or more likely your PR company has told you in no uncertain terms that you love vegan food and all vegans. No doubt your CEO will be seen in the upcoming weeks munching on a vegan burger and super green smoothie.

Then some major sucking up.

Trying to slowly dig your way out of the hole Hyundai. Only problem is that it's excruciatingly obvious what you are doing. #Embarrassing

But some people genuinely found it hilarious.

Luckily for Hyundai some people got the joke. To be fair you might not look forward to a vegan dinner party if you are not vegan as much as a standard meat and two veg one.

And others think the world is too damn sensitive.

Some people were quick to point out that Hyundai were just trying to be funny. They may not have succeeded but we don't think there was any malice involved.

And why is it only vegans complaining?

I'm also waiting for the American Dental Association, courthouses, and airplane companies to be offended by the Hy… https://t.co/NOsLNFYTTz
— superseedyb (@superseedyb)1549279972.0

How about airlines? Or dentists? Or even the justice system? Are vegans more sensitive than other groups of people? Maybe they are just craving something more substantial than a carrot? (Sorry we didn't mean that!) Well maybe we did, a little.

But at least Bateman saved the day for some.

That likeable face could get away with murder. Although not the unnecessary murder of innocent animals obviously.

So apparently vegans are weirdos.

@peta @Hyundai I'm down for great treatment of animals, but the commercial is just fun for the Superbowl. This worl… https://t.co/InFFJuDpuF
— ThebestPorkchop (@ThebestPorkchop)1549268230.0

We evolved from cavemen and have teeth that are designed to eat meat, so why are people suddenly embracing veganism? It seems to be down to freedom of choice. And some meat eaters are weirdos too.

You can't argue with Morpheus.

Although to be fair, vegans do need to lighten up a bit. Not everyone is going to be a fan of a beetloaf with a side helping of sprouts. Others may like you more if you just laughed it off and went back to eating your jackfruit tacos. Damn those are delicious.

And some wanted to know why Hyundai brought the brilliant Jason Bateman into this sh*tstorm?

Hyundai knew this would be controversial. The whole bad publicity is still publicity deal. But why involve Jason? There will now be a whole host of vegans who are faced with the moral dilemma; to watch or not to watch the new season of Ozark?

We just want a world where vegans and non vegans can live alongside each other in peace.

Surely that's not too much to ask?