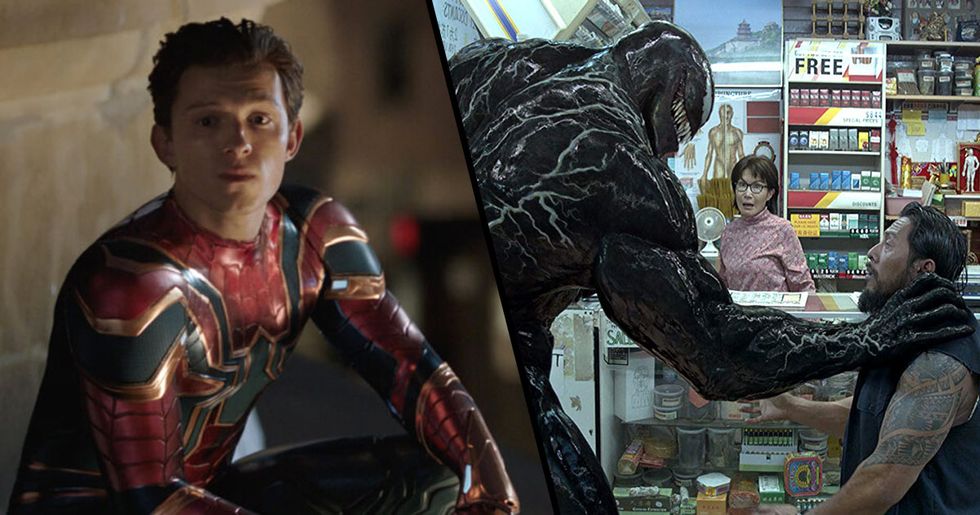 It's been a tricky few months for Sony and Disney. Their highly-documented spat meant that Spider-Man's MCU future hung in the balance and left fans feeling pretty heartbroken at the iconic superhero's potential departure from the MCU. But, several weeks on, it seems everyone has finally kissed, made up, and struck a new deal.

The agreement means that Spider-Man will continue to hit our screens as part of the MCU, which, of course, came as a great relief to fans.

But there's something even better that may be coming out of the new agreement...

After several hints, it has been revealed that fans will finally be getting the long-awaited Venom and Spider-Man crossover movie that they've always wanted.

Keep scrolling to get all the details on the exciting announcement.

And if the two powers couldn't come up with a deal?

Well, it would mean that Spider-Man would have to leave the Avengers forever - meaning Tom Holland would be totally out of a job. And fans were not happy.

Although some were feeling a little confused.

The lack of ability to come to a deal seemed, to some, like a flimsy excuse for what may actually have been going on behind the scenes.

Some had other speculations.

There were theories that Sony did not like where Tom Holland was taking the role and had to stop him by any means necessary.

In fact, many thought that there was more to this story than met the eye.

It all seemed a little bit sketchy. Would two massive movie businesses throw away a super-successful franchise without appearing to really try to work things out first?

As this story came to light many have noticed that Tom Holland (usually known for keeping a cool head in moments of conflict) had unfollowed all Sony-related accounts on social media. Yikes.

There was a pernicious rumor that Spider-Man's crossover was a commercial failure - but this is just, categorically, untrue.

Many were just plain-old upset by the news. Not only is Spider-Man an integral part of the MCU, but Tom Holland has played him perfectly.

The idea that Holland's Spider-Man was not well-liked seems crazy.

And the responses of the internet to this sad news just proved how much support Holland has out there.

But it's time to put this crazy idea to the side...

It has just been announced that Sony Pictures, Disney, and Marvel Studios have confirmed a third movie in the Spiderman franchise produced by Kevin Feige.

It appears that the studios were able to reach a deal after all...

Speaking to Variety, Kevin Feige said: "I am thrilled that Spidey’s journey in the MCU will continue, and I and all of us at Marvel Studios are very excited that we get to keep working on it."

Spider-Man is one of the biggest comic icons of all time...

"Spider-Man is a powerful icon and hero whose story crosses all ages and audiences around the globe. He also happens to be the only hero with the superpower to cross cinematic universes, so as Sony continues to develop their own Spidey-verse you never know what surprises the future might hold," he continued to say.

Amy Pascal will also produce through Pascal Pictures, as she has on the first two Holland-led films.

Pascal also shared her excitement: "This is terrific. Peter Parker’s story took a dramatic turn in ‘Far From Home’ and I could not be happier we will all be working together as we see where his journey goes."

Robert Lawson, chief communications officer for Sony Pictures Entertainment, said: "We have had a great collaboration over the last four years, and our mutual desire to continue was equal to that of the many fans, and we are delighted to be moving forward together."

But the new agreement is bringing us even better news than just more Spider-Man.

A highly anticipated Venom and Spider-Man crossover movie has officially been confirmed.

Tom Hardy’s Spider-Man spin-off, Venom, was met with a mixed reception. But, it was also the seventh-highest grossing film of the year, raking in over $850 million in revenue.

Given its huge financial success...

A sequel is already in the works, predicted to hit the box office in 2020.

And it left many fans with the same question...

Will Spider-man be featuring in the upcoming sequel?

Well, it seems the director of the first Venom film, Ruben Fleischer, thinks it won't be long before they cross paths.

Fleischer seems fairly keen for both the comic book characters to meet.

He claims that everything will lead to the long-awaited crossover...

According to Fandom, he said: "That's where it's all going to lead, and that's the exciting thing because we changed the origin of Venom... in the comics, he evolved from Spider-Man but because of the Marvel-Sony thing we weren't able to that. And so the thing I think it's building towards, and will be exciting to see, is when they actually do confront each other."

Fleischer will not be directing the next Venom film...

Andy Serkis is set to take over the reins of the franchise.

Whether the pair will butt heads for Venom 2 or Spider-Man 3 is not yet known.

Although it's clear the studio wants to bring them together for a showdown sooner rather than later.

Fans have been reacting to the news online...

And it seems many of them are pretty excited about the meetup.

People were rooting for Deadpool to also be a part of the crossover.

People seem to think the trio would form the "holy trinity." As we await more details on the crossover, keep scrolling to learn more about the all-female Marvel movie that Brie Larson is lobbying for.