These Are Some Very, Very Bad Parenting Moments | 22 Words 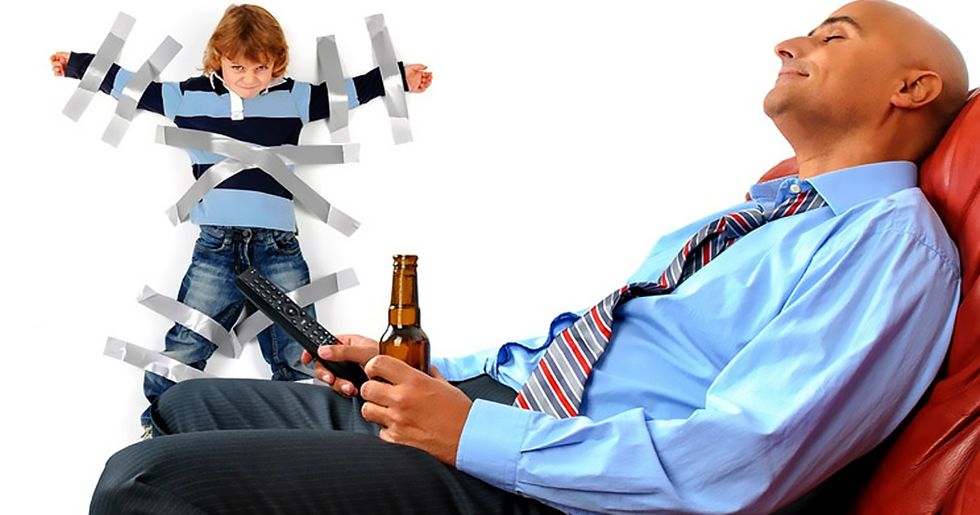 These Are Some Very, Very Bad Parenting Moments

We all have a similar understanding of parents, right? They're kind, loving people who put their children above everything else in their life. But it's easy to forget that parenting is a skill, and it's even easier to forget that some people just aren't cut out to develop some skills. For instance, knitting might not be for you if you're not dexterous. And parenting might not be for you if you're insane.

If you're one of the countless people who feel left out by your less-than-ideal parental situation, know that you're not alone. People with insane parents have been flocking to Reddit's /r/InsaneParents subreddit to tell tales of the most insane moves their supposedly loving, nurturing parents have pulled.

Get ready to be incensed, and maybe a little bit relieved that you didn't have it so bad, as you check out these honest-to-god actual conversations, mostly conveyed via text message, between normal kids and their truly insane parents.

This is why you can't let insane parents install a security system.

INSANE MOM: Dishes done by 3 PM okay? KID: I get home at 3, is 3:15 okay? INSANE MOM: If I look on the cameras and they aren't done by 3 there will be consequences. KID: I can't have them done that fast. INSANE MOM: It's 3 now and the dishes aren't done, that's a day of no tech. - heartrate_

"Be more responsible than us!"

I thought we'd moved on from Iron Maiden to video games?

INSANE MOM: I just looked at the Iron Maiden website and a video! It is straight from the devil! My heart just keeps breaking over and over... 30-YEAR-OLD ADULT SON: Mom, it's just an '80s metal band. Dad has their cassettes in the basement from when he used to listen to them. It's fine. INSANE MOM: He said he didn't but I don't know! I will look! I just know that I watched the video the number of the beast and it is sickening! It is not fine! Just the picture alone on their website is sickening! INSANE MOM: Praying for your mind, eyes, and ears for what the concert is going to do to you! - cothromaiochta66

INSANE MOM: I can't believe that you wouldn't check with me before cancelling our discount! KID: I wasn't trying to do that... I got a new job, maybe this new place will have another one. INSANE MOM: You really are selfish aren't you? You know I rely on that! Why can't you check before you decide to take it upon yourself to uproot our lives? The least you could've done was given me a heads up. KID: It saved maybe 20 dollars on the phone bill. If you need the 20 dollars I can give you the 20 dollars no big deal. INSANE MOM: No big deal? I don't need your pity. I need your communication. To think I raised you better. You embarrass me. - Astreeter12

INSANE DAD: So this is how a "working girl" lives HIKING DAUGHTER: I went a few weeks ago, on the weekend. I just posted the pic today. I'm assuming you're not calling me a prostitute. INSANE DAD: Let's just say "a paid professional adult worker" :D - Santadid911

This tennis coach is drunk with power.

KID: Hey forgot to tell you tennis is canceled on Thursday and he moved it to today INSANE MOM: How convenient for you KID: What do you mean INSANE MOM: You're always occupied on Wednesdays now. Can never make it to church KID: Ok KID: He rescheduled it for today KID: Probably because I told him I didn't want to go to church KID: Or maybe because he's the coach and it's his schedule - sdghag

As we all know, the worst thing you can do in a small town is ruin an Easter. They get ready for Easter all year long!

A series of texts from a mom who was upset that her kid stopped paying rent and moved out on his own: A LOT of people in this town know why I kicked you out and how you ruined my Easter! Just remember, word gets around in a small town! ALRIGHT, YOU SMART MOTHERF-ER I ALREADY KNOW THE TRUTH! I WISH I WOULDN'T HAVE did ANYTHING FOR YOU your WHOLE LIFE because NOW YOU AIN'T NOTHING BUT A PIECE OF SHIT, A WASTE OF TIME, AND A WASTE OF GOD'S CREATIVITY!! - JesseMorgan0690

To be fair, this kid's parents are principals from the 1950s, when people thought this kind of thing would do literally anything to change a kid's behavior, who fell through a time-vortex and into 2019.

This post was titled: My dad went ahead and tore down my room without me there and has, as of posting this, given away all of MY furniture.

These parents don't want their kid to pick up their drunk friend when they need them.

INSANE MOM: Your father and I have come to the conclusion that picking up a drunk [friend's name] is not a good idea. She has already proved untrustworthy and manipulative and we don't want you putting yourself in a position to get #metooed KID: Uhhhhh KID: Ok - Grimms629

Does this sound like a lazy guy to you?

Nothing worse than calling to check in and hearing, "Why don't you call more often to check in?"

I got you a vacation you have to pay for that will ruin your life! You're welcome!

INSANE MOM: I bought the tickets to Miami for the 6th. Please pay me back as soon as possible. $640. ADULT CHILD: Wait what ADULT CHILD: Why would you buy tickets for the 6th. I've told you 100 times that it's my first day at my new job. INSANE MOM: You can ask them if you can start later. They cannot force you to do anything. Really, you act like an ungrateful witch sometimes. You act like it's a punishment to spend time with your mother. I bought the tickets already so you can figure out what you need to do. ADULT CHILD: I'm not going to postpone moving to Seattle by a MONTH so that I can go on a vacation that I never signed up for and have to PAY for??? INSANE MOM: Orphans would give up anything to have a chance to go on a trip with their mother. Spoiled brat. I'm contacting your recruiter and moving your start date. ADULT CHILD: Mom if you contact my recruiter I will lose it you can't you can't you can't INSANE MOM: Stop acting like a toddler having a tantrum. If you won't take responsibility for family obligations I will. You are so high strung I don't know how you will survive on your own without your loving mother. You need a vacation for your anxiety. It can be relaxing and help you recharge. - flossii

Enough with the texts!

I probably shouldn't have gotten so angry, BUT I'm so tired of the smart mouth. I asked her for her phone and she told me NO. I just don't know what else to get her attitude adjusted. When she's grounded from it her attitude is okay, but when she's drawing it's so terrible. Now someone doesn't have a phone and nothing was her fault. - Nimhue

Don't you guys have to sleep too?

His inheritance? Hypochondria and anxiety!

ADULT SON: I've had a headache two days in a row. INSANE MOM: Is it possible you are HIV+? Those are symptoms. ADULT SON: No mom I'm not INSANE MOM: It scares me to even think we have to discuss this possibility. - Krazah_Dark

INSANE MOM: What are you doing today/ tonight? ADULT CHILD: Dunno yet ADULT CHILD: Going on a hike INSANE MOM: Okay then INSANE MOM: I guess we won't be talking anytime soon then. Have a safe trip to Utah. ADULT CHILD: It's only Tuesday relax ADULT CHILD: You're not even home INSANE MOM: Omg really. I'm done. You haven't made any effort to talk about your disrespect to me. INSANE MOM: You have really put a wrench between us. I am very hurt. - hedgehog12444

Most parents' goal is to outsmart the estranged children they're trying to see, right?

"Young lady, we will not have PORTABLE DIGITAL INFORMATION in this house!"

INSANE MOM: Your father was getting the trash out of your room and found this [the above picture]. We are extremely disappointed. Come home now. KID: MOM LMAO THAT'S A FLASH DRIVE INSANE MOM: I highly doubt that. INSANE MOM: Call me right now. - LmFaOpk

INSANE MOM: Have you seen all the deaths and statistics on vapors? INSANE MOM: If you need to smoke, just smoke a cigarette. - XL_Grizzly

A normal mom relayed this story of an insane mom: So... 13-year-old son going to the cinema with friends. One of the friends' mom, because she's never met the boys before, wants them all to individually take a pic of themselves and send to her son's phone so she can see what they look like before she decides if her son can go. - Importanceofbeinidle

At least this picture will make these children's' future therapists' jobs easier.

I could really use help raising the money for my boob job. I am saving every penny and buying myself nothing until I reach my goal. If every one of my Facebook friends donates just two dollars I'll reach my goal! Thanks in advance. - Latino_Gang101

Five necessary steps for parents to take to help prevent raising liberal children! 1) No TV in house 2) No internet access for children 3) Pick and drop, to and from school. Watch them walk in and out 4) Strictly prohibit music in the house 5) Always know where they are - vengedwrath

Check Out This Fall's HOTTEST Haircuts For Bootcamp!

INSANE DAD: I really hope you got a short haircut like I told you to. KID: I don't remember you telling me to do that. I remember you told me not to get something crazy so I got what I always get. INSANE DAD: It's not my fault that you don't listen. KID: When did you tell me? INSANE DAD: You are having a hard time following directions at the moment, so we are going to have to tighten things up for you. KID: What does that mean? INSANE DAD: Get ready for bootcamp. - Tohken_Lordy

What are these "You owe us two dollars"-based punishment systems?

INSANE PARENT: Why didn't you feed Pan? You owe us two dollars. KID: Okay my bad sorry INSANE PARENT: Give it to me this afternoon, you're not waiting until you get your check KID: Ok INSANE PARENT: You also didn't sweep downstairs this morning. Now it's five dollars. - Deltron6billion

This feels... out of the blue.

From a mom whose kid is moving out of the house (which still doesn't come close to explaining anything). INSANE MOM: Please don't have any of them perverts mailing stuff to my house. Get yourself a PO BOX. KID: Um??? INSANE MOM: Just heed what I said. KID: Wait what perverts? KID: Where did that even come from omg INSANE MOM: The end. - tell-your-mom-i-said

"No son of MINE is going out for a walk!"