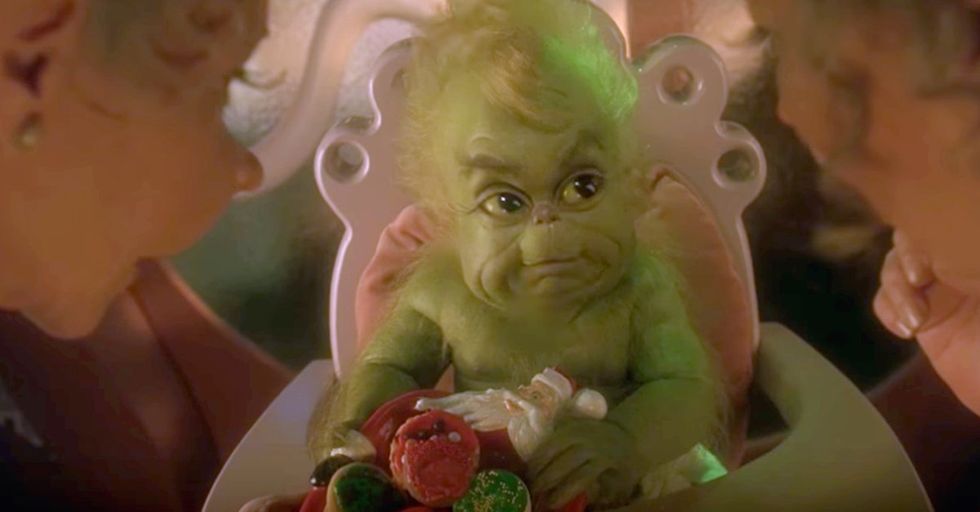 Kids movies are supposed to be good, wholesome fun for the whole family.

And by the whole family, we mean the kids.

The only problem is, adults make them, and after spending months, or sometimes even years making a single film, those adults get very, very bored.

That's when they make very adult jokes, which they sometimes leave in the final cut of the movie.

Here are 11 of the most risqué ones.

1. The Grinch - Where do babies come from

Reddit user Herp-de-Herp reminds us that when innocent Cindy Lou Who asks the Grinch's two aunts where babies come from, "one of the men in that scene sees the baby and yells [...] "Hey Honey, our baby's here!" and then mutters "He looks just like your boss....""
Get it? One strange thing we've always wondered is if the cuckolded man in The Grinch ever truly understood that he'd been cuckolded. Maybe we're thinking too deeply about this. The Grinch is a kid's movie, after all.

In the world of Cars, stock car Lightning McQueen is a big shot. He's driven to win, and tends to accomplish whatever goals he sets, including winning prestigious competitions.
No wonder the twins Mia and Tia are his "biggest fans." When they meet him in person, they "flash" their lights at him, and the police have to lead them away. Subtle.

This is the conundrum that plagues famed food critic Anton Ego. Ego, who is a man of rare and refined tastes, refuses to ingest any food that is beneath his palette.
As he explains to the awestruck Linguine, "I don't like food, I love it. If I don't love it, I don't swallow. " Okay...

Another naughty moment in Ratatouille comes when Linguine has a breakdown over using a rat to cook in one of France's poshest kitchens.
When he goes to the refrigerator to cool off, he is followed by the suspicious Chef Skinner, who asks him what he's doing. Linguine replies he's familiarizing himself with the vegetables, to which Skinner gifts him this immortal repartee: "One can get TOO familiar with vegetables, you know! "

Honestly Ratatouille is a little treasure trove of obscenities for adults to spot. Another classic moment comes when Linguine is overcome with the guilt of lying to his love interest Colette, and tries to come clean to her.
What Linguine wants to say is that he has a tiny little rat that tells him what to do. What he ends up saying instead is that he has a "tiny little..." Cue Colette glancing horrified at his nether regions.

Possibly the king of dirty jokes in children's movies is the animated film Shrek. Honestly, we're not even sure it qualifies as a kid's film it's so perverse.
For instance, the villain's name is Lord Farquaad, which sounds a whole lot like the word f***wad. Classic.

Monster House is a horror movie for kids, and a very scary one at that. We were honestly so frightened by the whole venture, we wondered how – HOW – it was marketed as a kid's movie.
The scariness of it wasn't the only thing that gave us question marks. There's a scene in the movie where the house reveals itself in all its frightening glory, leading to the kids pointing out its anatomy.
"Well, if those are the teeth, and that's the tongue, then that must be the uvula!," says one kid, pointing at a chandelier. "Oh, so it's a girl house," replies another kid.
Uvula is the dangly organ in your throat, but since this is a "female house", we're pretty sure he means vulva, which is a whole other organ entirely. Nice.

Cowgirl Jesse's talents sure must be stimulating, because when the heroic Buzz Lightyear first claps eyes on them in Toy Story 2, his jaw drops and his wings pop out.
Yep, you guessed it, he pretty much sprang the galactic toy version of an erection. Nice job, Disney.

Say you're a busy writer with a bit of a potty mouth, and you want to use cursing in a kid's movie without actually cursing at all. Do what the writers of Madagascar did and make Sugar Honey Iced Tea your go-to exclamation. Let that acronym set in...

9. Shrek - Trying to compensate for something

Remember that scene in Shrek when Shrek and Donkey walk up to Lord Farquaad's castle and he remarks, "Do you think maybe he's compensating for something?" Yeah, that was definitely an innuendo. Definitely...

Rich Kid Says He Resents His Parents for Giving Him $100,000 and 'Spoiling' Him