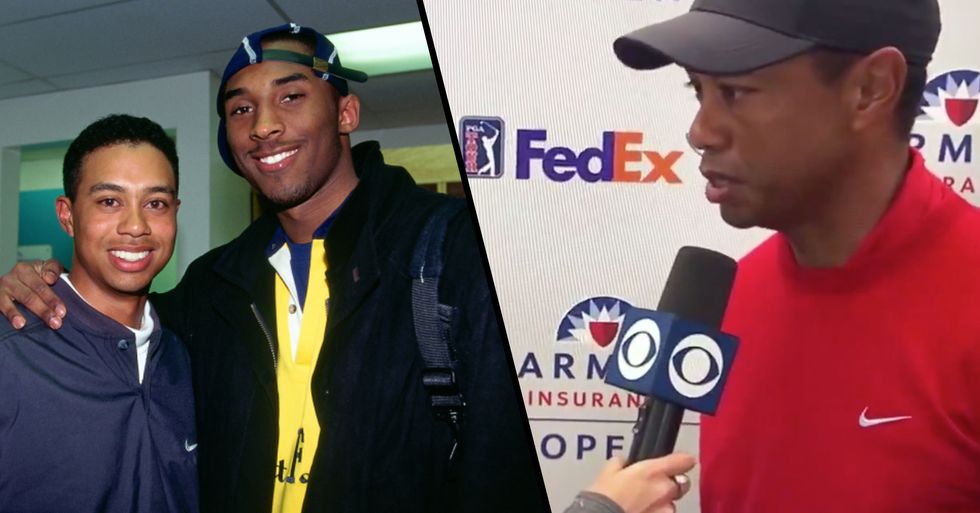 The internet's heart was broken when it was revealed that the legendary NBA player, Kobe Bryant, had died in a helicopter crash on Sunday morning. He was just forty-one-years-old. Nine people are now confirmed dead.

Tributes have poured in for the star and here are some of the most poignant.

Scroll to the end to see Tiger Woods's reaction.

It has been confirmed that Kobe Bryant tragically died in a helicopter crash on Sunday morning.

Bieber shared this throwback snap of the 2, saying "It can't be. You always encouraged me mamba. Gave me some of the best quotes that we smile about to this day! Love you man!" R.I.P. to all the victims of this tragic accident.

Teams made touching gestures on the court to honor Byrant.

They let the shot clock expire for 24-second violations, which the crowd seemed to support with an uproar of applause.

Bryant's death has been felt all over the world.

In Australia, teen tennis player Coco Gauff wrote a tribute on her trainers which could be seen during her open doubles match.

He warmed up in a Bryant jersey before his match against Rafa Nadal.

Former footballer David Beckham paid a tribute to his "friend."

Beckham posted a number of pictures on Instagram in remembrance of him. He posted that he was ‘heartbroken’ and ‘devastated’ having only spoken to him on Sunday morning.

But not all celebrities were aware of his death.

The tragedy hadn't sunk in for Tiger Woods who had only briefly been told of Bryant's death by his caddie, Joe LaCava. Keep scrolling to see the heartbreaking video.

Woods told CBS Sports after the round that he "didn't know until coming off the 18th green."

“I didn’t understand why people in the gallery were saying, ‘Do it for Mamba.’ Now I understand. It’s a shocker to everyone. I’m unbelievably sad, and it’s one of the more tragic days. The reality is setting in because I was just told about five minutes ago."

“Life is very fragile as we all know, you can be gone at any given time and we have to appreciate the moments that we have. I just can’t imagine what his family’s going through right now."

Woods and Bryant broke into their sports at the same time.

1996 was the year Woods went pro and Bryant was drafted.

Sportsmen and women from around the world paid tribute to Bryant, while at the Grammys, they even illuminated his Lakers jerseys.

It's the video of Woods finding out about Bryant that shook us.

They were clearly very close.