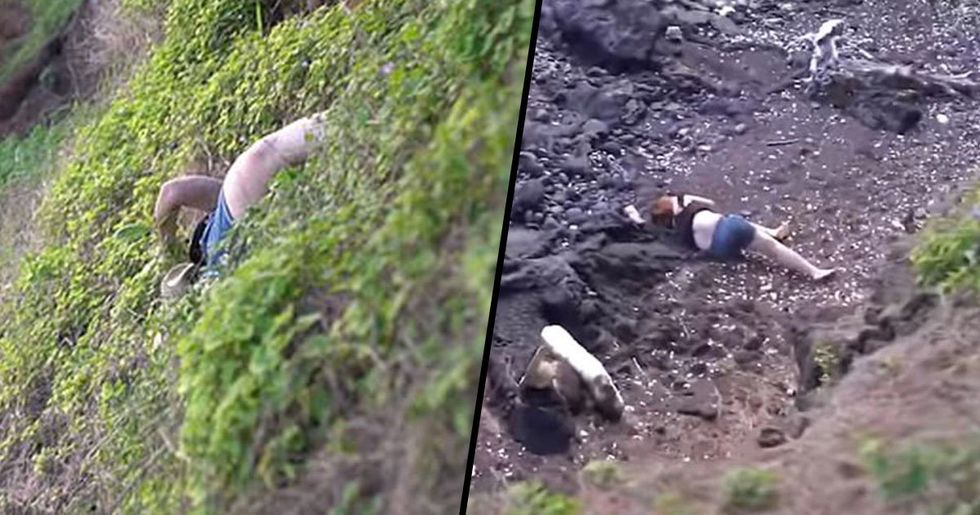 A video published by a YouTuber named Shonduras has recently gone viral - and for all the wrong reasons. The vlogger has an ongoing series called Best Day Ever, in which he shows off the escapades of himself and his wife, Jenny. But one video in this particular series got more attention than Shonduras (real name: Shaun McBride) bargained for.

The video, entitled "JENNY FELL OFF A CLIFF ... scary moment for our family" was quite bizarre. From the way he framed the story as an inspirational, carpe-diem style tale, to the truly tiny cliff that Jenny actually encountered, to the fact he filmed the whole thing (while editing out a good amount of Jenny's words) is partly hysterically funny. But others are questioning whether it represents a wider issue with the ways that relationships are portrayed online.

Many of us spend our lives looking for that special someone.

Falling in love and finding your soulmate can make you feel as though everything is going to be ok.

But in today's social media age, there's a little more to consider.

Now that our every move is documented online, relationships have almost become performative. Even non-famous couples have some sort of public presence.

The aim is to present yourselves as some sort of power couple.

Making your relationship look aspirational to the public is a strangely big aim for many online relationships - and this phenomenon is pretty weird.

Not to mention, cringey.

The idea that a relationship is somehow part of the public domain puts a lot of pressure on it - plus it invites comments from strangers, many of which don't tend to be too flattering.

But it's this odd social media trend that has led to this lastest sensation.

There has recently been a large internet joke surrounding the word "wife." And there's no denying that the internet seems to have a pretty odd relationship with it.

Some trace this back to the beginning of the phenomenon.

A man named Robbie Tripp shared a picture of himself and his wife on Instagram, with a pretty strange (and some would say controversial) caption.

It did seem like Tripp was attempting to gain respect from his followers for finding his (already attractive) wife attractive. Many found this to be pretty irritating behavior.

Others saw the whole thing as symptomatic of a larger problem.

Buzzfeed picked up on the story and wrote a post with a caption, "I'm not crying, you're crying." People thought this was a pretty outrageous response to a man who had really done the bare minimum.

Although the whole thing did spawn some excellent memes.

The phrase "I love this woman and her curvy body" became a caption that could be applied to pretty much any image and be universally funny.

And in spite of the nay-sayers, Tripp and his curvy wife are going strong.

He recently shared an image to his Instagram announcing the pair's pregnancy.

Tripp has actually released a music video (and matching song) about his curvy wife, which he released just a few days ago. Many are calling the entire thing "cursed."

But the latest "Wife Guy" is potentially even more annoying to the public.

For one thing, he's a YouTube vlogger, a group of people who are already known for being pretty irritating.

One of the biggest offences for a vlogger?

Their over-reliance on clickbait titles. And that's really where the beginning of the story of the "Cliff Wife" begins.

The clickbait he went for?

This YouTuber (username "Shonduras") shared a vlog depicting a vacation with his wife. The pair went hiking and Jenny suffered a small fall from the trail. But (as you may have guessed) he decided instead to claim she'd fallen off a cliff.

And here it is!

It appears Jenny has made a full recovery from her "cliff" fall, and according to McBride, fans of his channel have been very supportive of his vlogging decision. We have to thank him, though, for one of the most distinctly "internetty" moments of the year.

At first, people were kind of confused.

It was a pretty weird thing for McBride to do. Filming an accident, by accident, is one thing - but choosing to broadcast it online just seemed plain weird.

But there was another overriding reaction.

Many thought the whole thing was absolutely hilarious. Admittedly, the melodrama of the initial video is pretty hysterical - which, when combined with the actual size of the cliff (tiny) and the terrible editing of the video, make for a pretty amusing viewing experience.

He tweeted a shorter version of the video first.

And the reactions to that were just as hilarious as the full video.

It seemed there was almost endless comic potential in the phrase "cliff wife" - and Twitter was ready to milk the joke for all it was worth.

Many of the jokes were song lyric based.

For example, this Avril Lavigne inspired entry, which we think is pretty ingenious. The words "cliff wife" just seem to fit so well into tons of famous lyrics.

Another comes with a more old-school song inspiration.

A browse through the "cliff wife" tag on Twitter comes highly recommended. People have been very creative with this joke formula.

It seems the possibilities are endless.

Is the phrase "my wife fell off a cliff" actually objectively funny? Or has the internet collectively rotted our brains so much that we're all caught up in the weirdest joke of all time?

There are other excellent sources of material to build a "cliff wife" joke from.

This one, based around the iconic last line in F. Scott Fitzgerald's The Great Gatsby, is a particular favorite.

Others noticed a striking similarity in the fall.

Many noticed the fall made by Jenny was almost a less dramatic version of something we'd seen before - when Amy Poehler's character Lesley Knope fell in to the pit in Parks & Recreation.

Some pointed out this odd aspect of internet culture.

you’re off twitter for one morning and suddenly someone’s wife fell off a cliff
— Jill Gutowitz (@Jill Gutowitz)1558821802.0

Things move so fast that it's almost too easy to miss out on the beginnings of joke - and then, all of a sudden, it's taken over your entire timeline.

In fact, the "wife" joke had long been a Twitter tradition.

It was the "cliff" twist on the classic "wife" formula that people found so amusing. There have been many different "wife" jokes on the internet in the past month alone.

Many made a joke out of the entire "wife" meme.

The fact there has been such a proliferation of wife-based humor over the past month is either spookily coincidental, or a sign of a shift in the collective consciousness. Perhaps online relationships are now so played out that the mere mention of the word "wife" is funny.

But it seems there are two wives who are still everybody's favorites.

The curvy wife and the newly discovered cliff wife will forever hold a special place in the internet's heart. And any joke which combines the two is all the better.

Although this one is probably the best.

The idea of everyone in the world fitting into a distinct type of wife is already funny - but combining it with a Doris Day tune is a sure fire way to Twitter success.

But Twitter is in total agreement on one thing.

The best days on the internet are the ones where you can refer to "the wife guy" and everyone knows who you're talking about
— Brooks Otterlake (@Brooks Otterlake)1501958963.0

A "wife" day is a great Twitter day. And based on the fact he's disabled comments from his YouTube video, we're guessing McBride is regretting his decision to clickbait.