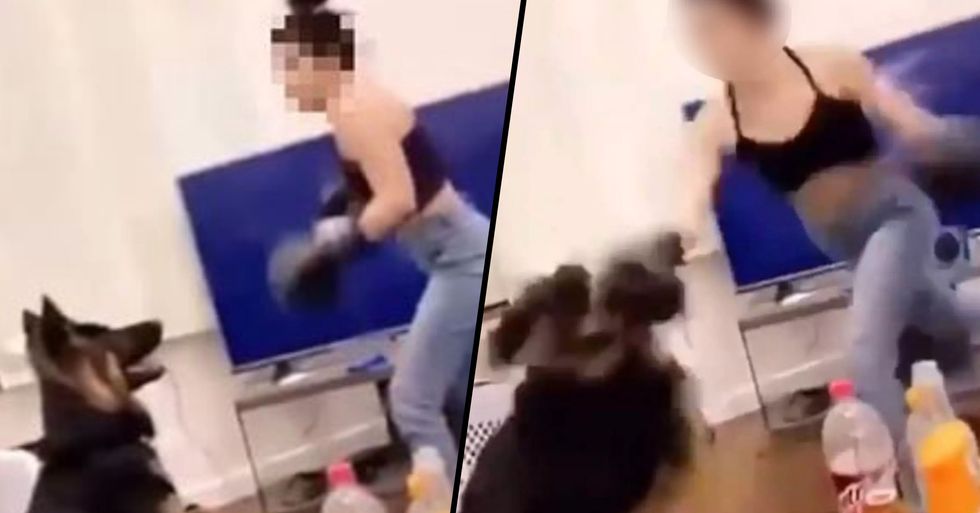 We really don't deserve dogs, they truly are man's best friend, so it's unthinkable why anyone would want to do anything that could harm them or cause them pain.

Yet the world is a messed up place, and sadly there are people out there with the worst intentions for our beloved K9s...

A video has gone viral of a woman 'boxing' her dog, and the internet is furious.

Be warned, these images may be unsettling...

One video of a woman abusing her dog has gone viral...

An investigation has been launched in Idaho after the woman in question, London Miner, was seen punching her dog on Snapchat.

It's unsettling to watch...

Miner can be seen punching the German shepherd in the head, while the cameraman can be heard in the background saying: "We're boxing animals. Where's Sarah McLachlan?" After this, they can be heard laughing.

She clearly has no remorse...

At the end of the horrendous video, Miner admits: "I hit him so hard, I felt that through."

The original poster of the video has removed it, but that didn't stop people from sharing their responses and pictures of the abuse...

It was captured and shared on other social media sites, and questioned by people who have her Snapchat.

The viral clip sparked outrage, with many calling for Miner to be prosecuted.

After the "overwhelming" number of phone calls and emails regarding the welfare of the dog, the Idaho Humane Society launched an investigation into the video.

People are determined to see her brought to justice...

The society posted to their Facebook page, writing: "There is a video circulating through social media which we will not repost due to its content which originated in the Treasure Valley. It has been shared through many social media networks and our Animal Care and Control office is receiving an overwhelming number of phone calls and emails."

"We started an official investigation as a result of this video. This morning the individual was identified and we sent a Humane Officer to discuss the situation. The investigation is currently pending review at the local prosecutor's office for a charging decision."

People have since been anxiously waiting for updates on the case.

They announced that if Miner is prosecuted, they may press charges on "beating and harassing animals" which states under the law that any person found guilty of whipping, beating, or treating any animal with cruel intentions can be charged with a misdemeanor.

But people were more concerned with having the dog taken off Miner.

The post went on: "The Idaho Humane Society works to protect all animals from abuse. We also believe that because domestic animals are a product of human intervention, we have a very special obligation to them in regard to humane treatment and responsible stewardship."

They have since urged the public to stop getting in touch about the clip...

As they've assured people the case is being dealt with and any more calls over the video could halt more pressing matters the society has to deal with. Can you really blame people for wanting to know if the pup is ok?

London Miner hasn't been charged as of yet...

The Idaho Humane Society has made a claim that if Miner is charged, she could face up to 6 months in prison or a $5,000 fine. Is that justice? If you're in need of something more heartwarming, keep scrolling to find out what one man wants to do with the stray dog he found on his travels...