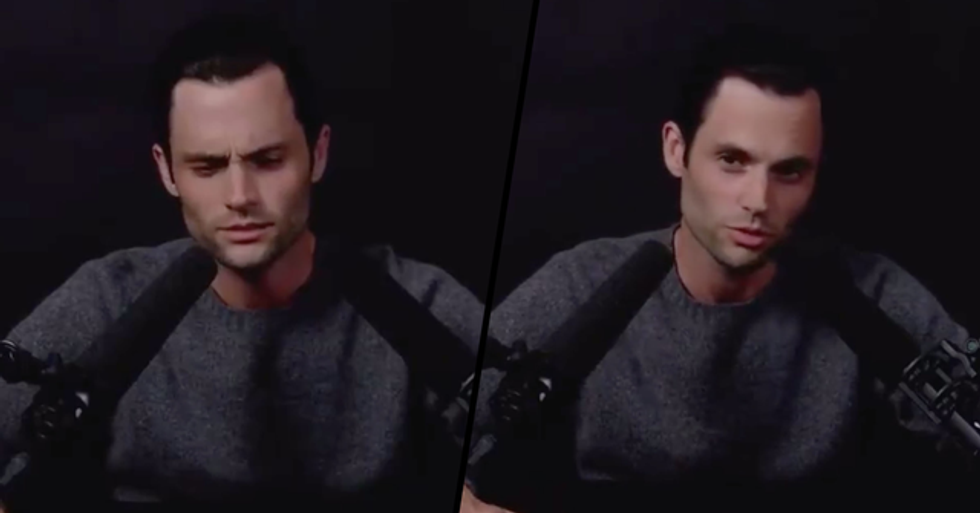 When You hit Netflix at the end of last year, the whole world watched, entranced, as the creepiest bookshop employee ever seduced his writing-student obsession, and left a pile of corpses in his wake. While there was never going to be a happy ending for Penn Badgely's Joe, there was good news for creators of the series, as the terrifying thriller was renewed for another season. You season 2 dropped just last week, and yet again, the world has gone wild for murderous (yet oddly charming) lead, Joe - played by Penn Badgely.

Now a video of Penn doing ASMR has surfaced on Twitter - and the world has gone absolutely wild for it.

After the trail of destruction Joe left behind in New York, season two of You had a change of scenery.

As Beck is (sadly) no more, Joe obviously needed a new victim - sorry, sorry, girlfriend. Love Quinn was played by Victoria Pedretti, who you may recognize from The Haunting of Hill House.

And one thing was for certain.

Joe wasn't going to be unable to outrun his past for too long. You can take the man away from stalking, but you can't take the stalker out of the man, after all.

The second series of You was loosely based on Kepnes' follow up book.

But it's safe to say fans of series 1 were in for a treat.

And there was another reason fans were excited for series 2.

Another opportunity to look at Penn Badgely's oddly charming face.

Why is the internet so attracted to this terrifying man?

Who knows - but Penn's latest move has cemented him as Twitter's ultimate heartthrob.

Because a video has surfaced that's got the whole internet talking.

It's given everyone goosebumps - but, like, in a good way.

And some got straight to the point.

Not much to add to this reaction ...

Having never been attracted to Penn, could one ASMR video change everything?

While for others this was just confirmation of what they already knew.

Penn Badgely is certainly doing it for some people...

Some found themselves addicted.

@ahiddenIife I honestly can’t stop watching this. Every time it pops up on my feed I’m sitting here playing it on r… https://t.co/CfjEqnv6Bz
— Kaylynn Michelle 🥀 (@Kaylynn Michelle 🥀)1577695906.0

@ahiddenIife And I didn’t understand how those women were attracted to Bundy, but here is enough evidence to show t… https://t.co/NjcchUo8Gv
— It's TABATHA (@It's TABATHA)1577951969.0

We thought it was strange that women liked Ted Bundy - until now.

Some were left feeling troubled.

Penn's acting talent is hard to deny based on how many of us have a crush on Joe Goldberg.

If you like Joe Goldberg, you're gonna love Dan Humphrey.

But things have only gotten worse.

Dan Humphrey was questionable - but Joe Goldberg is undeniably a villain.

Some realized dark truths about themselves.

Hey, the first part of recovery is acceptance!

Although some were quick to make this distinction.

Penn does not mean Joe - OK?

Some found a unique use for the video.

@ahiddenIife Been listening his asmr vid to fall asleep for the past week. His voice is sooooooooo luscious. This… https://t.co/W2bK6FwkgX
— (Hot Girl Pisces)⁷ (@(Hot Girl Pisces)⁷)1577678465.0

Struggling with insomnia? Penn Badgely could be your unlikely cure!

While some looked to the future.

@ahiddenIife i’m just excited for his future roles because his acting in You deserves ATTENTION & i expect roles to… https://t.co/oVgnZ4QaHq
— sanj (@sanj)1577661546.0

Is there any role this man can't play?

And some had a pretty simple response.

While for some, it all got too much.

We can see where they're coming from!

But one thing is for sure.

This may be the ultimate thirst trap of all time.

Luckily, the internet was on hand to cool us down.

Proof that nobody is 100% perfect.

Here's the video that got everybody talking.

Who knew all it took was 2 microphones to send the world totally "feral"?

Did this viral video work on you?

Fancy some more eye candy? Scroll on for the Australian firefighter's calendar that had the whole internet talking.