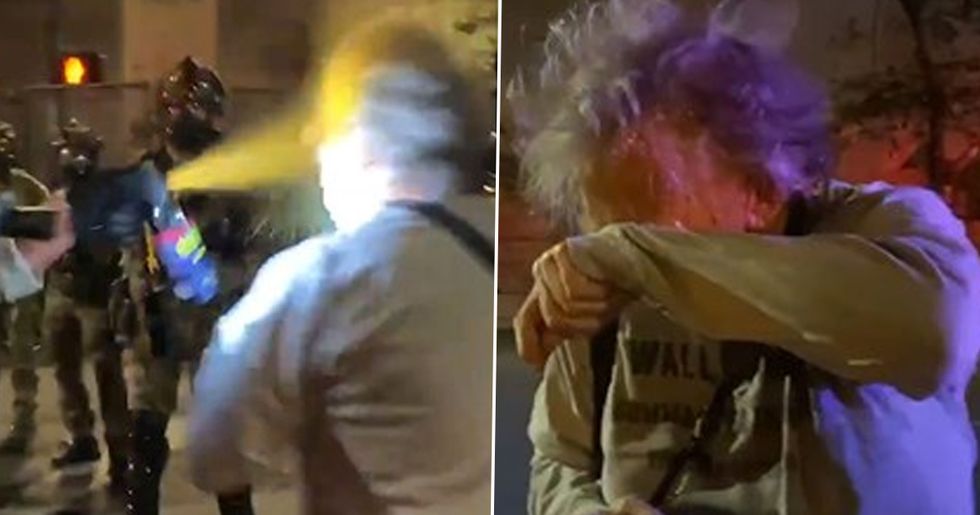 As protests continue to rage on across the country, countless US army veterans have gotten involved, with many of them protesting alongside the demonstrators.

One Vietnam vet has recently gone viral after shocking footage emerged showing him confronting one federal officer before taking a nozzle-full of pepper spray to the face.

Here are some of the pictures uploaded to Twitter:

The George Washington statue in the Hollywood District of NE Portland is the latest one to be vandalized. The statu… https://t.co/XdkplJqecu
— Eric Patterson (@Eric Patterson)1592569232.0

And The Oregonian also obtained this snapshot:

The statue, which was situated in front of Jefferson High School and across the bottom of the base, you can see the words "slave owner" written across it. No arrests have been made yet. Keep scrolling to see why these celebrities were called out because of their reaction to the BLM movement...

Protests in Oregon continue to rage.

And now some seriously sickening footage has emerged of a Vietnam veteran being sprayed in the face with pepper spray. The incident was captured on Saturday night by journalist Andrew Kimmel, and it shows Mike Hastie peacefully confronting the authorities when an officer in full riot gear blasts him with the spray.

He was not being threatening.

Feds pepper sprayed this Vietnam Veteran/photographer right in the face. His name is Mike Hastie. He was an Army me… https://t.co/Tv5ggDkWWo
— Andrew Kimmel (@Andrew Kimmel)1595755852.0

Mike kept his distance from the officers and was simply making his opinions known before he was attacked. As if this wasn't shocking enough, Mike served in the Vietnam War where he was a medic and witnessed numerous atrocities committed against the Vietnamese people. Horrific.