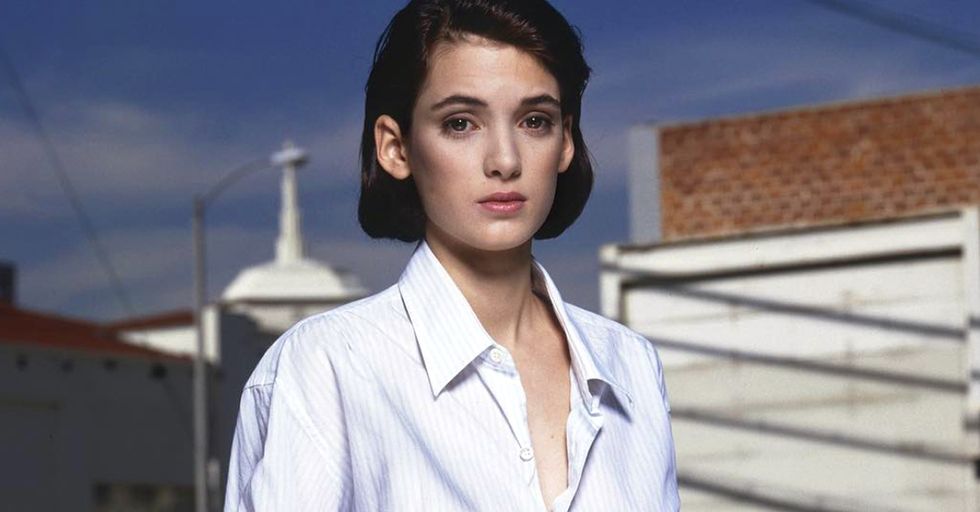 40 Vintage Photos of Celebs That Are Too Cool for School

Are you ready to see the coolest photos of your favorite celebs, pictures that are totally rare and until now not seen by many?

Well, it's happening, so buckle up.

I don't think it can be overstated how much good Axl Rose, Guns 'n' Roses frontman, did for gingers everywhere.

Winona Ryder was photographed here in 1989. She is just the coolest, and I am so very glad she's made a comeback.

He looks a little different these days, but yes, that is Jason Momoa way back in 1999 filming Baywatch in Hawaii. Talk about a glow-up.

Here's The Boss in 1978. For a pretty small dude, he sure can bring the house down in any stadium anywhere in the world.

That right there, folks, is Princess Diana meeting Drew Barrymore and holding a stuffed E.T. doll. And yeah, that's Steven Spielberg in the background.

Is this an odd pairing or what? And have you ever seen a bigger suit? This was taken at the MTV Movie Awards in 1996 and we're pretty sure Natalie Portman blocked this from her memory.

Cher invented the phrase "long hair don't care." OK, she didn't, but here she is looking fly as hell on The Sonny and Cher Comedy Hour in 1974.

No Doubt was supposed to open for Bush at the Pond in Anaheim, and she forgot something important at home, so she ran to get it in her curlers, and this photo was taken!

This woman literally has not aged in decades. Here she is at the NAACP Image Awards on January 11, 1992, in Los Angeles, CA.

Look at this adorable kid! He looks quite different now. And oh man did he used to look just like his mom!

Yup. That right there is baby Leonardo DiCaprio being held up by his cool parents, Irmelin and George.

This is a candid photo of Marilyn Monroe, makeup-less and in the pool having a great time! You never really see her being totally silly like this.

Wow. It doesn't get more '90s than this, folks. The tiny, transparent sunglasses and their matching blond shags? It's too much to handle.

Drew Barrymore has been in the public eye since she was a tiny little toddler. She definitely had her...um...phases, but she's currently one of the coolest people in Hollywood, hands down.

Amy Winehouse was a force to be reckoned with. Her albums are still some of the greatest of all time, and she is dearly missed by so many.

This photo is straight from the series wrap party for The Fresh Prince of Bel-Air. Who knew Will Smith would become the superstar he is today?

Hold on. I have to catch my breath after looking at this photo. Whew.

Julia Roberts out here looking like the Hamburglar at the 1993 NATO/ShoWest Convention. That's a lot of stripes, girl.

Johnny Depp used to be one of the hottest celebs around. His hair was absolutely iconic.

Here's Janis Joplin backstage at Winterland in 1968, a total icon with her bottle of Southern Comfort.

Tyra Banks is photographed during a fashion show in 1994. She honestly looks like a real-life Barbie here, which explains why she was so perfect in Life-Size.

Angelina Jolie has reached such celebrity status that she's pretty much otherworldly at this point. But I did see her in a movie theater once taking her kids to see the new Jumanji, and she's a person, just like us, only with security staff.

Joan Jett was hanging out in Santa Monica when this photo was snapped in 1977. She's pretty much the coolest person alive.

This portrait of the Rolling Stones frontman was taken in Paris in 1971 by Jean-Marie Périer. The man is a living legend.

David LaChapelle took this photo of Ryan Phillippe. This is peak Cruel Intentions era, and let me just say, that mesh shirt is really something.

Alicia Silverstone wasn't all silly and bubble like Cher in Clueless. She was ultra-serious when she was being photographed with her hair hanging weirdly over her neck in 1995.

1986 Madonna was full of religious iconography and also looking like she just got out of the shower. But it's OK because she can do no wrong.

This Led Zeppelin guitarist looks like every hipster in Brooklyn who brews their own beer.

George Harrison might be the coolest Beatle. There. I said it.

Audrey Hepburn is pictured here in the gorgeous wedding gown from the movie Funny Face. The epitome of beauty!

Annie Leibovitz took this badass photo of Keanu Reeves for Vanity Fair in August 1995. Those leather pants. I can't. He also doesn't ever age.

Heath Ledger was a true gift to the acting world, and it's a terrible tragedy that we lost him. Luckily, his work lives on.

Back then, this fashion icon was known as Posh Spice. She was a leader and a trendsetter and honestly, that hasn't changed as the years have passed.

The men of Friends, everyone! Man, they had some good hair back then.

Shelley Duvall is an absolute icon, and this photo proves it. Her performance in The Shining is simply incredible.

This photo was taken at the Met Gala in 1995. This right here is supermodel royalty. It doesn't get much more famous or iconic than this.

We end with Michael Jackson, smiling in his iconic red leather jacket. The celebrity power is too great with this one. Share this with the celebrity-obsessed person in your life!