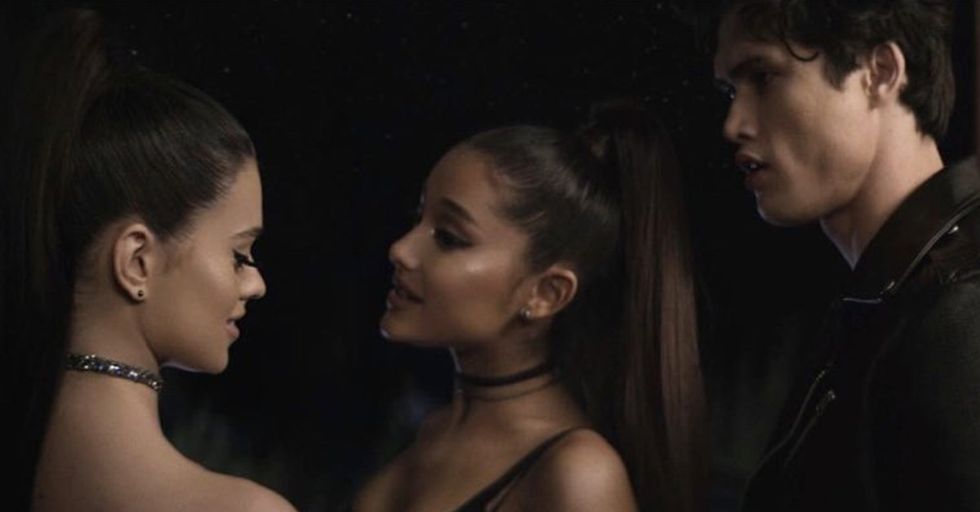 Ariana Grande has been dropping music videos from her new album one by one and each one has gotten a big reaction. The video for Ariana Grande's new single "Break up With Your Girlfriend, I'm Bored" is no exception. It has a lot of people talking. Mostly things like, "wow, that's kind of a wordy title?"

I'm kidding! The music video already has 61 million views so the jokes on them, Ariana cannot and will not be stopped, even if people think the title is not the best.

Comments on the YouTube video say things like, "I swear to god Ariana can turn any sentence she says into a song." and "Ariana Grande's titles in 2020 be like 'I don't have anything to eat at home, so I'm just gonna order a pizza.'"

But the new song has Twitter talking, too, but for a different reason. The title has inspired a movement on Twitter, and it's pretty funny.

The video for Ariana's "Break Up With Your Girlfriend, I'm Bored" features an Ariana look-alike and her boyfriend, who Ariana seems to be into.

Wait, or is she into the girlfriend?!?! Does the girlfriend represent Ariana? Is Ariana in love with herself? Let's not think about it too hard.

ok ladies everyone text a guy you think is shady and say “break up with your girlfriend, I’m bored” and reply with… https://t.co/eAnurerLt0
— ellie schnitt (@ellie schnitt)1549657163.0

Just for fun, see what they say.

Um, sir. How many do you HAVE?

This guy actually is husband material.

Congrats to his lovely bride.

I can't breathe is the perfect response to this. Literally. Because of asthma.

Well, this took a dark turn.

Wait, if you have the same grandpa...did she send this to her cousin?

Ohhh, that was harsh.

Well, this was unfortunate timing.

Maybe you guys actually can hook up?

I feel like Ariana would be proud of this collection.

Does she know she inspired a movement?

This guy had a surprisingly sweet counter-offer.

A hike would be nice.

Did these two people just get together?

Maybe not after he found out she thinks he's shady.

Oh no, did she just break them up?

This has backfired enormously. Unless that's what she wanted...

Ok, this one is cute.

He knew what was going on and still went for it.

Oh, sorry about that, man.

This was kind of a downer.

Let's be honest, probably not.

Deflecting with a dad joke.

This took an interesting turn!

Where did that come from?

People in the comments speculated.

Yeah. Or at least him and his girlfriend had a long talk and he "reconsidered" his response.

This guy tried texting a girl.

It did not work.

From their chat history, it looks like they may have a rocky romantic history anyway.

But then someone pointed this out:

What a whirlwind week and a half!

Well, she's not going to turn anything down.

Yeah, I'd change my mind when I saw his beer tower guzzling profile pic, too.

Honestly now I'm kind of embarrassed for her.

He let her down gently, at least.

That's all of them!

Try texting your local shady friend and see what he says!