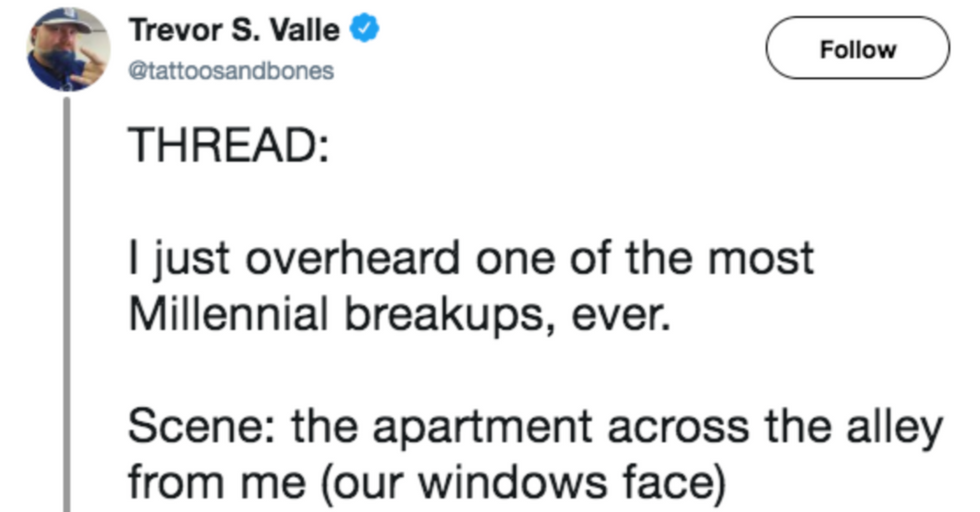 Relationships are tough, but breakups are even worse. There's a dramatic aspect to them, as it can be hard to say goodbye to someone that you spent years with. But, like anything, breakups can be an inevitable part of life. And quite often, breakups teach you things about yourself and can allow you to look introspectively, and prepare you for your next relationship.

And then sometimes, breakups are just insane.

One Twitter user, Trevor S. Valle, tweeted a thread of a breakup he overheard at three in the morning. The story is more bonkers than you probably think it is. It's hard to feel sorry for this couple after reading what went down during their breakup.

The story begins with Trevor hearing a shrill scream from out his window.

THREAD: I just overheard one of the most Millennial breakups, ever. Scene: the apartment across the alley from me… https://t.co/Y4DW3qDyQb
— Trevor S. Valle (@Trevor S. Valle)1539773476.0

I would be terrified if I heard this scream. A blood-curdling scream late at night? No, thank you.

Right off the bat, we know this can't be good.

But Trevor, the brave soul that he is, decided to listen to the situation unfolding across the alley. And what a situation it was.

The stakes weren't quite as high as a scream would lead someone to believe.

Hey, I'm not here to judge. Dropping your phone in the toilet is a nightmare!

Phones are basically our life-lines.

I kind of understand the dramatics of the situation, but it gets worse.

This is where things get gnarly.

The panic and sobbing are a bit much, but that is pretty nasty. Who wants to deal with their phone covered in poop?

Okay, this is totally tragic.

Both of the people involved in this couple seem like they could take it down a notch, but honestly? I'm here for the drama!

The girlfriend then attempts to be helpful.

When your man is going through tough times, it's important to try and help him, right? Like when he pukes on his phone in the toilet. The plot thickens.

It doesn't get nastier than that.

But it's about to get a whole lot worse.

Turns out, there's another woman!

There's so much to unpack here! So, he was FaceTiming his side-chick while pooping?

There are no words.

If that's what was going down, then no, thank you. I don't want to have any part in it.

The best part about this interaction is that the side-chick was still on the phone. She was floating in the toilet.

Why wouldn't she hang up?

I would've hung up immediately. You don't just stay on FaceTime after you've been dropped in a toilet.

This is when it gets really good.

It sounds like the girlfriend in this situation actually dodged a bullet. Her boyfriend seems like a real winner. Also, is he sobbing over his phone being destroyed or the girlfriend breaking up with him?

It's hard to say, but it sounds like the girlfriend is the only one who came out of this situation okay.

Obviously, the internet had a lot to say about this breakup story.

A lot of people didn't believe the story, but Trevor showed a picture of how close the two apartment buildings are.

Yeah, you could definitely hear a loud fight in the middle of the night.

Some people were living for the sheer drama of it all!

And how could they not? It's like trying to tear your eyes away from a car wreck.

Others were just really interested in what kind of phone this boyfriend had.

It does seem quite durable. A girl was left on FaceTime in a toilet, after all.

There were also questions about the logistics of it all, which Trevor tried to answer.

It all sounds more complicated than an episode of Westworld.

Some decided they didn't want the answers to the questions.

Which is probably for the best. I'm shuddering thinking about it all.

Some believe the poop was a lie all along!

It's all very nauseating. Does anyone have Pepto-Bismol on hand?

Some got straight-up scientific with it.

@LadyMdeJ @tattoosandbones This explains many things about male behavior patterns that we generally choose not to understand.
— Ken Lonquest (@Ken Lonquest)1539800742.0

Who knew this crazy breakup had so many layers?

It really makes you question what we're doing with our free time. It's fine. We're all fine and productive members of society.

Others got punny with it.

This person right here is a jokester. I'm mad I didn't think of that first.

The breakup story made some people feel better about themselves.

It really does put things in perspective.

Of course, the majority of people were confused.

Can someone please follow up with the couple? WE NEED TO KNOW WHAT IS HAPPENING.

Some people regretted reading the thread.

That's fair. This story is not for people with weak stomachs, that's for sure.

But there were definitely those who loved this story.

@tattoosandbones Oh. My. God. At once both hilarious and appalling. I'm almost 60. Have never had a laughing fit… https://t.co/tVtycFKynJ
— ThatDarnShrink (@ThatDarnShrink)1539829914.0

This is getting weird but I can't stop scrolling. What is happening to the world we live in?

Relationships are complicated, y'all.

They can be wonderful, of course. Or they can end up like this.

We can only hope this couple got their stuff together.

I hope everyone involved in this story learned a lesson.

Trevor needs to sleep with his windows closed, the girlfriend shouldn't date losers, and the boyfriend needs to be better. Also, the side-chick needs to hang up the dang phone! Share this with a friend going through a crappy breakup. It'll make them feel better.