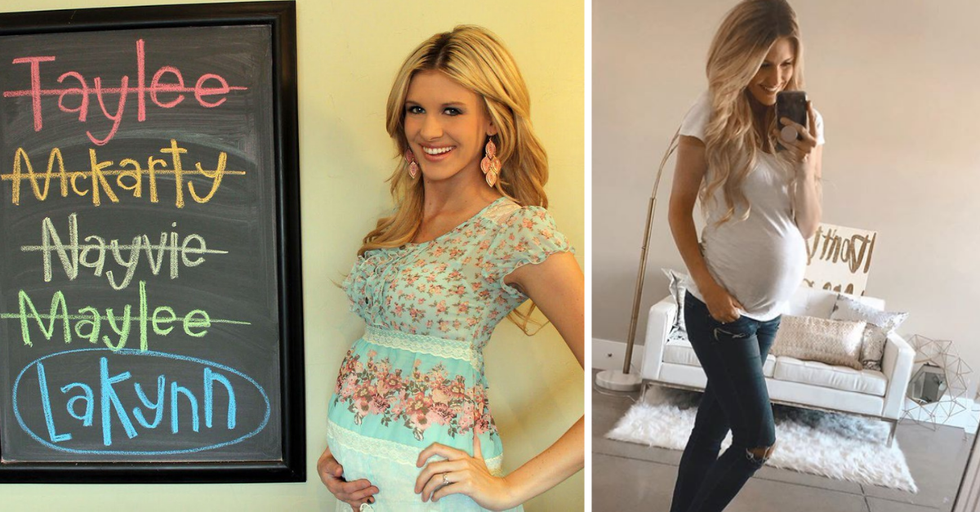 If you’ve ever had a pregnant friend, you know the minefield that is hearing what they plan to name the baby. It's so intimate, so personal, that no matter what name they pick, your response HAS to be pure joy. If your face betrays even a hint of shock or, god forbid, disgust, you officially become the worst friend of all time.

That’s why it was such an act of kindness when McKinli Hatch posted her baby’s name on a chalkboard back in 2012. Her potential names were terrible, a smorgasbord of cutesy millennial spellings. Even the final choice, Lakynn, is so bad that typing it just now took me 10 minutes because my auto-correct refused to believe it was even a word, let alone a name. Telling any friend those names in person would have been a Red Wedding-level betrayal.

And now, Hatch recreated the chalkboard meme to show her process in naming her new dog. You’ve got to check out these dog names — they’re somehow even worse than the kid names.

What's in a name?

We all have a name, but does it really affect us that much in our day-to-day lives? The only time I ever think too much about my name is when I'm trying to decide whether or not to mess with a Starbucks barista and tell them our name is, like, "Reginald" or "Quality Nate" or something weird. They won't call me out on it. Starbucks baristas are super chill.

But as it turns out, giving your child a bad name is a monumental parenting mistake.

If you give your kid a weird name, you're asking for them to be teased. You might as well start teasing them yourself, from birth, so they'll at least be used to it.

When she wrote her baby names on a chalkboard in 2012, McKinli Hatch went viral.

Posting to her blog in 2012, McKinli Hatch announced her second's child's name by, apparently, listing the worst names she could think of and then circling the very worst one. As you can see, Taylee, McKarty, Nayvie, and Maylee were deemed too normal for Baby Hatch. They all had arbitrary "y"s, but none of them had the perfect mix of arbitrary "y"s and unnecessary "n"s.

Not since Arya Stark has a list of names gotten more attention.

And Arya's murder list wasn't all full of extra "y"s. And that's pretty important, since it would've ruined the immersion if she was going after Cyrsey Lannyster or Beryc Dondarynn.

Soon, McKinli was the internet's go-to example for bad baby-namers. If your friend was thinking about naming their kid something like "Bloomdora," you'd probably think she'd consulted with McKinli.

Now, going viral is quite possibly the worst thing that can happen to a person.

If you make one mistake, act weird one time, and the internet somehow gets ahold of it? Then that's who you are for the rest of your life.

Think about the "cash me outside, how bout dat" girl.

She's going to be known as overly aggressive and confrontational for the rest of her life. Do you think she's ever going to get a job at Starbucks? Starbucks baristas are supposed to be super chill.

You smile awkwardly in one school photo, and all of a sudden you’re the internet’s representative of screwing up.

Good things have to have happened to Bad Luck Brian at some point in his life, right? But you'll never hear about that — the internet is too busy pointing out all the times he spilled chili on himself at just the worst time to spill chili on yourself!

Even a weird line reading you give in a movie released decades before the internet can make you a meme.

Arnold Schwarzenegger couldn't even conceive of memes when he famously said "it's not a TOOmah," but do you think that's stopped the internet from posting reaction gifs of it every time someone online asks a medical question?

Speaking to BuzzFeed News, McKinli seemed to take her internet fame — and mockery — in stride, saying, "Some of the memes, and even comments on the memes, are pretty funny and I can laugh along with them."

Maybe McKinli likes being made fun of by the internet?

I can't imagine why someone would enjoy being made fun of by the internet, but hey, that's why I've never accidentally gone viral and then fanned the flames years later by recreating the picture they were making fun of me for in the first place!

Because she did the chalkboard thing again the next time she got pregnant.

Taysom, Ollie, Grayson, Asher, and Tatum? I don't know, I only see one arbitrary "y" in the whole group. It almost feels like McKinli Hatch is losing her special touch.

And her third child has to feel left out.

He didn't get even one ridiculous name put on a chalkboard! The Hatches decided to wait to find out their third baby's gender until birth, but they still could have done gender-neutral names on a chalkboard, right? Might I suggest "Jaime?" Er, I'm sorry, "Jaymee?"

But Chalkboard Mom has returned.

In her full-on infuriating glory, Chalkboard Mom has stepped back into the arena, and this time? This time she's going hard vis a vis baiting the internet.

McKinli's put out a new photo of potential dog names on a chalkboard.

How do these brainstorming sessions with McKinli go? Are her and her husband at the chalkboard, throwing out atrocious names? Because it sure looks like she's taking her time to draw the letters so they look fun and vibrant. My brainstorming notes are always a half-degree of legibility away from scribbling.

And as she made clear — she's ready to hear from the internet again.

The caption of the Insta post? "Hey internet, how did I do this time!?" And since it is McKinli Hatch next to a chalkboard of names, we all know the answer is "astoundingly bad."

The names are a bunch of dog puns.

"Pup tart?" "Chewbarka?" Barkley?" What exactly is McKinli's goal here? To make everyone she tells her dog's name to be so overwhelmed by her cleverness they have no choice but to shake her hand and tell her she's a genius?

And puns are never, ever funny.

We're at a point with puns, as a society, where anyone makes a pun, everyone else groans, and the pun-maker says, "sorry, I had to do it!" If you're someone who makes puns, I am here to tell you that no. No you don't have to do it. We do not enjoy it. You are making our lives worse.

The name McKinli settled on for her new pup? "Maverick."

The fact that she didn't go with "Maveryckk" is a little shocking and, if I'm being honest, disappointing.

It's just kind of a neutral dog name.

Really pretty tough to have a hot take on this one. "Maverick" is neither a good name nor a bad name. I will say that "Maverick" is, without question, a name for a dog.

But in this case, neutral is good!

"Neutral" is a step up from "god awful," and when you're as god awful at coming up with names for both babies and dogs as McKinli Hatch, any progress is huge.

McKinli is definitely getting better at naming things.

The trend line for McKinli Hatch names is point up, and that's a good thing — it means any of us can get better at anything! Seeing McKinli name her dog something not completely embarrassing has made me want to double my efforts at skateboarding.

The first chalkboard said the baby's name would be "Lakynn," but the baby was actually named "Laikynn."

And her next two kids? Pretty normal names!

Since her first chalkboard hit the web, McKinli's had two other kids — Tatum, who's currently two years old, and Madden, who is 11 years old. Those names are just, like, boy's names! Congrats McKinli! You didn't destroy their futures before they were even born!

Maybe learning to pick names isn't that different than learning any other skill?

Doing anything seems almost impossibly hard the first few times we do it. But then, we get used to it, and it starts to become second nature (except skateboarding, which is always going to be hard).

You're not going to be good at naming when you first start coming up with names. Your first, I don't know, six babies are going to have bad names, and according to Malcolm Gladwell, that's just part of the process.

And the fact that McKinli's first son's name is "Titan" backs that up.

McKinli's first attempt was maybe her worst, but I get it, she wanted her son to go out into the world thinking he's tough. But "Titan" is a little much. Is the kid a soldier-type in an open-world RPG?

McKinli's next succulent could be in line for an honest-to-god good name.

If this trend continues, McKinli's next plant could have a totally have a normal name. What's a good name for a plant, you ask? Well, I've always been partial to Mitch.

So long as she can refrain from adding in a bunch of unnecessary letters.

Another part of that Malcolm Gladwell 10,000 hours deal is understanding that progress does not go in straight line. There will be starts and stops, and backslides. So even though she's getting better, there is still a strong chance she names that succulent "Mytch The Plannt."