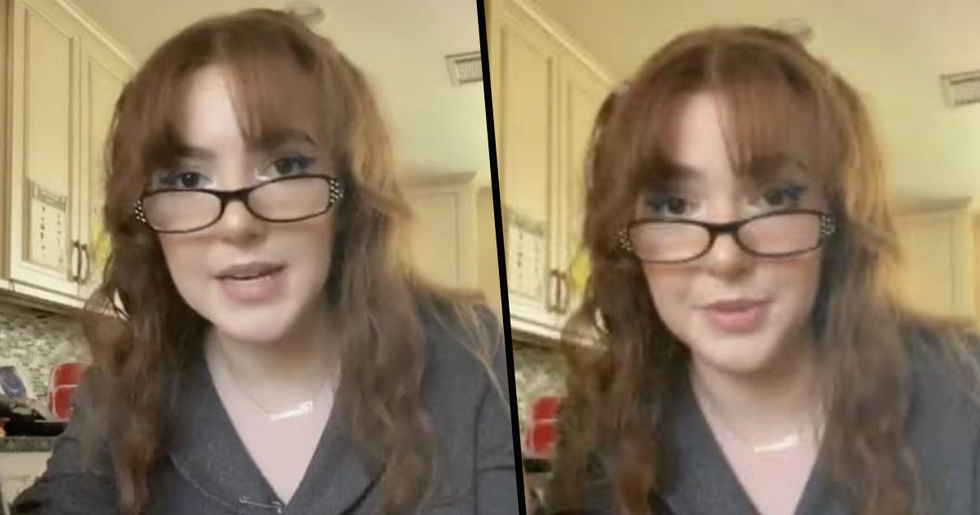 A girl has gone viral on TikTok after posting a series of videos pointing out the blatant sexism girls experience in school, in a spookily accurate way.

Safe to say, she doesn't hold back...

Dress codes in schools have been called into question several times...

Mainly due to the fact they are often targeted towards girls. Who else has been gotten into trouble for "breaking" their school's dress code?

In recent years, students have been calling out their schools for this specific reason.

Especially when male teachers will send a girl out of class for violating the dress code.

The reasons they offer for this can be extremely problematic.

Including the fact that certain outfits may be "distracting" to male students in the class.

While in recent years, more students are calling out this kind of sexism...

so schools can’t force students to wear a mask... but they can force girls to cover up when they wear a spaghetti strap tank top??? ok.
— jocelyn vlores (@jocelyn vlores)1594785147.0

It's rarely met with support from schools.

Well, this week, a TikToker has gone viral for delivering some home truths about the blatant sexism in schools.

And she doesn't hold back...

For those of you that don’t know...

TikTok is an iOS and Android app made for creating and sharing short lip-sync, comedy, and talent videos.

While we’re all stuck inside because of the pandemic, many have taken to Tik Tok in order to keep themselves entertained.

From The Doja Cat Challenge to the Fake FaceTime Call, we just can't seem to get enough.

And it's also helped artists go viral too.

The songs at the back of TikTok challenges have well and truly become hits in the charts, giving way to new and upcoming artists.

Some trends have not been so great...

Even though some of its viral trends, such as The Skull Breaker Challenge, have been hailed as stupid or dangerous, others have provided us with hours upon hours of quality entertainment.

But, TikTok has also been used for a very different reason...

Several users have been using the app as a platform to shed light on important issues such as racism, sexism, and homophobia.

And that's exactly what Nicole Ciravolo is doing.

Nicole has been exploring the topic of sexism in schools in a series of videos on the popular app.

And it's skyrocketed her to TikTok stardom...

People can't get enough of the educational videos.

Nicole says she was inspired to make these videos after spending thirteen years at a private Christian school.

Nicole told BuzzFeed: "We had uniforms, yet girls were constantly being dress-coded for skirt length (or often in my case, not wearing a bra — even though that's not in the dress code)."

But one of her videos, in particular, has really got people talking.

The TikTok has been viewed over 12 million times, and sees Nicole take on the role of a school secretary.

The TikTok starts by pointing out how ridiculous it is that a girl was called out of class for "violating" a dress code.

In the clip, the girl has been sent out for being disruptive to male students' learning.

But Nicole points out a very blatant fact.

In reality, the only disruption to learning was happening to her, as she was now missing class.

Nicole draws on her own experiences in school.

According to Nicole, at her school, if a girl's skirt didn't go past her fingertips, she had to go to the office and wear a spare skirt.

And if none of those skirts fit...

She'd have to call her parents and have them bring her another one. "It was ridiculous, especially considering it was often targeted at curvier girls like me whose bodies were inherently deemed more sexual."

In another of her videos, Nicole points out that it's extremely hot outside, and that she'd be wearing a tank top too.

Apparently, a girl in a tank top is more "distracting" than being too hot due to the weather. This kind of thing blatantly prioritizes boys' learning over girls.

Nicole also says how it's often male teachers who call girls out.

"There's nothing more disheartening than feeling sexualized by a male teacher and not having any female faculty defend you. So I wanted to create a character — sort of the wish-fulfillment hero I needed in high school — to show people how those experiences could have happened if they actually had someone in their corner."

Nicole continued the series with a phone call with the teacher...

Where she goes on to call him out for referring to an underage girl as a "hooker." "You are there to teach her, not humiliate her. And if you keep calling me sweetheart we're gonna have a much bigger problem!"

She goes on to say it's pretty creepy that he called her out in the first place...

While also pointing out the double standard of male teachers calling out only female students for dress code violations. At Nicole's school, she says boys were rarely called out, especially when it came to athletes: "They could show up to school completely out of uniform all day and not hear a word."

Her videos are helping so many people.

Not only are her impressions hilariously accurate, but they are also making girls who have been through similar experiences feel less alone. "The responses have been amazing. Lots of people go out of their way to tell me they felt safe in this space and this character somewhat eased the damage dress code encounters had on them when they were in high school."

You can check out all her videos here. For more TikTok news, scroll on to read why the latest trend is having everyone check their cars...