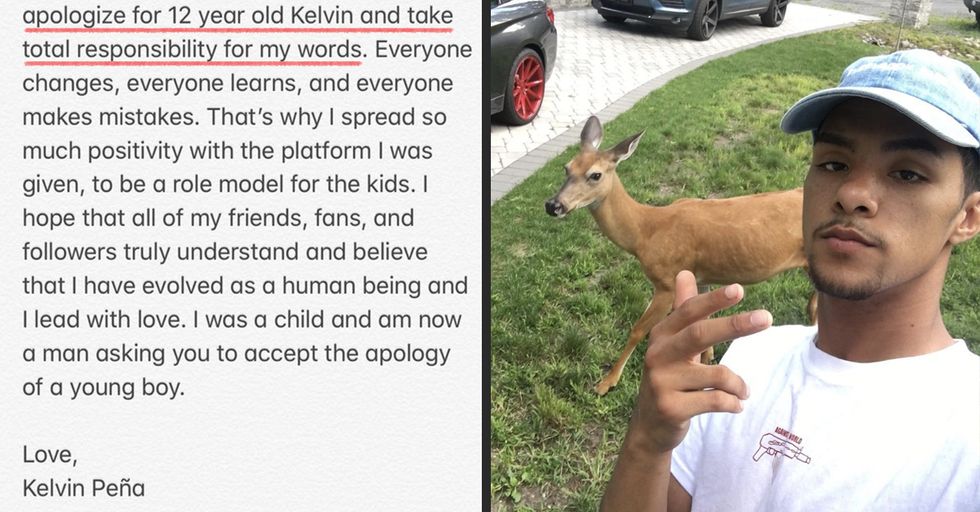 Viral Internet Star Raked Over the Coals for Racist, Anti-Semitic and Sexist Tweets

Have you heard of 'Brother Nature?' He's a viral internet star, real name Kelvin Peña. His internet fame stems from the sweet videos he displays online of the animals who live near his house. After a few years of fame and success via his Twitter and Instagram, Peña came under fire for some troublesome tweets that resurfaced.

Specifically, his claim to fame is his deer. Brother Nature has an inexplicable connection with animals, particularly a family of deer that roam near his house. His social media is chock full of stories, cute moments, and more with animal friends. But long before that, young Peña made some distressing comments over Twitter as a young teen. Now, those tweets appear to have caught up with him.

Peña's comments spread rapidly over the weekend. The internet was conflicted over how to respond, and reactions were varied. Read on to find out about the whole controversy!

This is ‘Brother Nature.’

His videos went viral in 2016, which led to him gaining a lot of Twitter and Instagram followers. Nancy and I looking at my page like no wayyyy... THANK Y’ALL FOR 1.5 MILLION FOLLOWERS -coldgamekelv

In it, one of Peña’s several deer friends, Canela, was walking through a backyard wearing a gold chain. After that, then-17-year-old Peña continued to make videos about himself and his “deer squad," including Canela and Peña’s “best friend," a deer named Money.

The internet was instantly enamored with Peña, Money, and the other deer friends.

"Every day since, he comes to my house and brings his Lil' family, which I all gave names too — they're my deer squad," Peña told Buzzfeed in 2016 of his friend Money.

He’s friends with lots of other animals, too.

He can even make friends with squirrels.

From now on call me the squirrel whisperer -coldgamekelv

Nowadays, he posts pictures with plenty of animals (and sponsored ads).

Making sure my girl Snickers is still living her best life even tho she pee’d on me ? Tag a fellow animal lover ?? For car rentals in Miami hit up @jaytabiza @luxurycarrentalsmiami -coldgamekelv

He has used his internet fame for good.

Peña founded the nonprofit Everybody Eats, aimed towards “helping single-parent families during the holidays and after-school kids year-round."

Last year, he helped out during the hurricane season.

Peña also used his Everybody Eats foundation to send supplies to hurricane victims in Puerto Rico.

Clearly, the 20-year-old star has done some good deeds.

He even has a separate account for his friend, Canela.

Where all my strong independent does at? -canelathesavage

Over the weekend, some old tweets of Peña’s were uncovered.

Among some of the deeply upsetting comments was a tweet reading “Heil Hitler" and another saying “[When] I grow up I wanna be like Chris Brown. So if my girlfriend tried to look through my phone while driving, I can choke and punch her :D."

The racist, sexist and anti-Semitic tweets were from 2012.

Peña was 12-years-old when he joined Twitter and wrote the offensive tweets.

The tweets were quickly passed around by Peña’s fans.

And, understandably, those fans were upset when they read what Peña had tweeted.

Not long after, Peña issued an apology for his words.

“I was a child and am now a man asking you to accept the apology of a young boy," he wrote in his Twitter apology.

The apology came about as fans were expressing mixed feelings over the ordeal.

Some fans were disappointed, some accepted the apology, and others thought the whole situaiton was uncalled for.

Many Twitter users approved of Kelvin owning up to his old tweets and apologizing.

Taking responsibility and trying to be better does seem like the actions of someone who has “evolved" as a person.

And those Twitter users offered forgiveness and a virtual hug.

At least Brother nature is trying to spread positivity.

Others couldn’t help but joke about it.

Is humor the best medicine in a situation like this?

And a few memes made the rounds.

There were many captions for this picture!

After all, the process of 'canceling public' figures is pretty common now.

But in this case, the cancellation may not be so effective.

The fans seemed to agree on one thing.

Most were pretty sure Brother Nature’s animals would forgive him, at least.

And many of his fans agreed that he wasn’t about to be canceled, either.

They seem pretty adamant about it!

How seriously should we take the words of a tween?

After all, he was 12 then, and he’s 20 now. Should the important thing that kids learn right from wrong?

Some argued that there are more problematic people out there.

Unsubscribing from Brother Nature may be your prerogative, but there are other people spreading negativity in the world right now who could use some of that activist attention.

The memes changed a bit:

Surely the deer would agree!

Some wondered who spent their time compiling the tweets.

People being called out for past comments has become more of a trend lately.

Some Twitter users felt that everyone says dumb things when they’re a kid (which is fairly accurate). Is it hypocritical of people to get upset over this?

Long story short, the internet seems to have calmed about this.

The general consensus is that the tweets were terrible. But considering Brother Nature’s apology, and calling into question the fairness of punishing someone for their 12-year-old selves, for the most part, others are moving on.

In the meantime, Brother Nature has kept tweeting post-apology.

And he got a Canela tattoo, too.

Time will tell if anything else comes of this.

Overall, it seems Brother Nature’s fans have shot down any kind of cancellation. What do you make of the situation? Like this story? Share it with your friends!
20%

$18.44 $14.75
Buy Now
See More Deals
We hope you find these deals as awesome as we do! Just an FYI: we may receive a share of sales from links on this page