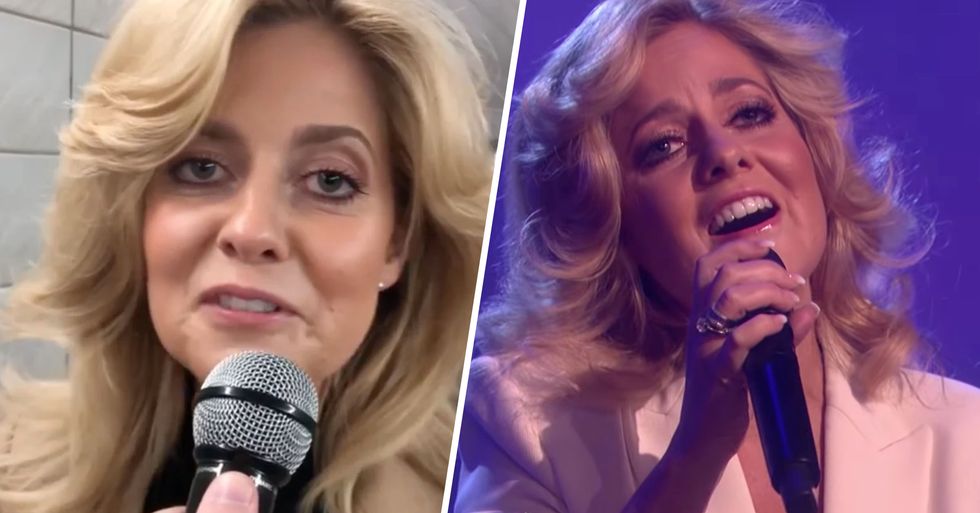 When you think of A Star is Born, one of the first things that spring to mind is its stellar soundtrack - or more specifically, the Oscar-winning track "Shallow."

Nearly 2 years after its release, the track is once again in the headlines this week. Why? Because a woman has gone viral after a man stopped her in the subway to finish the lyrics to the smash hit song.

And after her amazing performance on Ellen, we understand why the whole world is obsessed with her voice. Keep scrolling to see the video.

It proved to be box office gold.

We're still talking about it nearly 2 years on...

Although, undeniably, one of its biggest attractions was the fact that it was Lady Gaga's big-screen debut.

Her role as aspiring singer, Ally Maine, earnt her significant critical acclaim and has no doubt helped carve out a whole new career path.

And of course, let's not forget that it marked Bradley Cooper's directorial debut...

Cooper's remake of the classic tale truly took awards season by storm - raking in a Golden Globe, Oscar, and a BAFTA - to name a few.

The movie instantly became the film of the year.

While at first controversial, the casting choice of Gaga for the movie turned out to be excellent, and for sure is one of the main reasons the film has been so ranked so highly.

But there's one particular area in which the movie truly excels...

Since it's release, it has received platinum status.

The soundtrack has topped the album chart in more than fifteen countries and has been awarded platinum status in Australia, the United States, Canada, France, and New Zealand, according to Classic FM.

But of course, there's one stand out.

"Shallow" is easily the most well-known track from the movie.

Although some people disagree...

Some fans believe other songs from the flick didn't get the recognition they deserved.

But there's no doubt that "Shallow" has been the most commercially successful.

Not to mention the fact that it made Gaga and Cooper Oscar winners - bagging the coveted award for "Best Orginal Song."

Although this didn't come as much of a surprise to Gaga fans...

Especially given the fact that the singing powerhouse already has numerous number 1's under her belt as a solo artist.

The song recently re-entered the charts...

Which doesn't come as too much of a surprise considering it was recently Valentine's day.

But that's not the only reason why the track is hitting the headlines again...

A video has gone viral this week of a woman who was randomly approached by a comedian while on the subway in London, and asked to finish the lyrics to Gaga's acclaimed track. Keep scrolling for the clip.

And after watching, the internet was left well and truly shook.

They certainly weren't expecting what happened during the clip.

And of course, after some detective work, the woman was quickly identified as Charlotte Awbery.

There's a new Queen of pop in town.

The internet truly can't get enough - and since the clip went viral, there's even been fan accounts set up.

Some are cancelling the original Lady Gaga version altogether.

"i know my neighbors are mad at me for listening to charlotte awbery sing shallow for three hours straight i KNOW it," one user tweeted.

She's now got her very own fanbase.

And after the video went viral, Ellen Degeneres hopped on the bandwagon and invited her to come on the show.

Charlotte sat down and talked to the host about how this superstardom has affected her, revealing that she had gone from around 4,000 followers to half a million in a matter of days.

And now only that, her fan base is filled with some pretty big names.

She mentioned how Ariana Grande gave her a follow on Instagram and obviously, she was over the moon telling us that she "followed her back."

She also shut down any rumors that the original video had been staged...

Where there are fans, there are always haters and they had been accusing the producer of the video, Kevin Freshwater, and Charlotte, of teaming up to stage this masterpiece.

However, she claims she was just trying to get the subway.

"I was literally on my way to meet my friend!" She says. I bet she's glad she made those plans now!

She used to do bars and pubs before she came on the show.

But she has been an experienced singer for the past fifteen years. "My dad always said to me, 'Wherever you are, just always sing. Never give up.' He's right."

Kevin, who was also in the Ellen crowd was shocked after watching her.

"She just blew me away. I was just in shock," he said. "She deserves this. I was come to tears then, watching you sing. You deserve this."

This move also proved to propel him to a new level of stardom.

His video has now been viewed over sixty million times and has been shared all across the globe. Not bad for an hour's work, is it?

She wasn't just given a performance slot on the show...

Ellen, being the generous woman that she always is, gifted Charlotte with $10,000 and a yearly pass to use on the subway.

If you've ever been to London and used their Underground system...

You'll know that it ain't cheap so that's probably the best gift any Brit could ever have!

Check out her full performance on the show here:

And as an extra little treat, you can watch the original viral video here:

We were not expecting that... Interested in more A Star Is Born news? Keep scrolling to learn about one of Cooper's rules for Lady Gaga while filming...