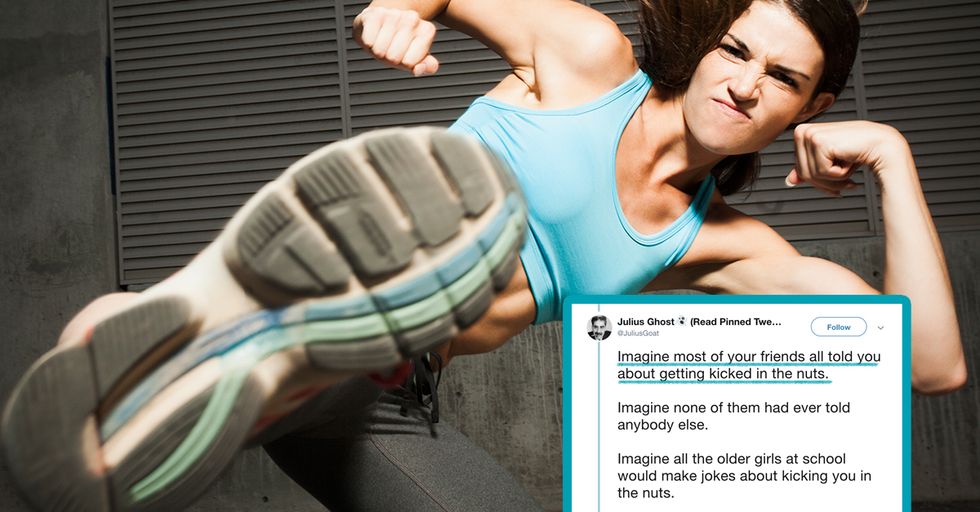 Ever heard the phrase "walk a mile in someone else's shoes?" Well, that is just what one Twitter user did, shown through a winding viral thread. Sexual assault is a hot-button issue right now, especially with the Supreme Court turmoil that just occurred. And while sexual assault shouldn't be political, it is, so you can imagine why this thread seemed to strike a chord with many of its readers.

If you're a woman, chances are you know very well what this man is about to describe. Only, he does so in a way that many men can relate to. That's not to say there aren't plenty of male survivors of assault. But if you're someone who has never experienced wandering eyes, hurtful names, disbelief by others, or any other pivotal moment this thread talks about, then it is a very important read. So scroll down, and grab a pair of walking shoes!

Here’s how the thread starts:

And this comparison is a sadly familiar one for women.

And, of course, it gets much worse than this.

Living in fear is hardly living.

We all deserve to be taken seriously when reporting matters such as these.

And how frustrating is this?

Why do we have to learn how to avoid attacks? Why can't the attackers learn that attacking is wrong?

Who decided that harassing people who are going about their business on the street was okay?

And objectification is clearly the worst.

Can you imagine how tiresome it must be, to seen as an object rather than a human being.

Some things shouldn’t be a joke.

Sexual assault is no laughing matter, and neither is objectification.

There are limited options to get support.

And that's how these age-old ideas become so ingrained in our culture.

When you're supposed to be able to trust your family, but you can't.

Because even somebody in a relationship can fail to understand boundaries and the meaning of 'yes' and 'no.'

What you’re wearing is NEVER the problem.

And asking those questions just prolongs the problem.

It hurts to know that even the law isn’t on your side.

Despite the fact that sexual assault is a crime, too few are ever punished for it.

This happens with male perpetrators all the time, and more people should be concerned about it.

Gosh, it's so difficult to imagine!

Or maybe it isn’t so difficult, after all.

And here’s the kicker (the 2016 Presidential election):

Shouldn’t there be repercussions for this?

This turn of events boggles the mind.

And now we come to the parallel for Bret Kavanaugh’s nomination.

Why was his accuser practically put on trial for speaking up?

Everyone agreed that Dr. Blasey Ford was ‘credible.’

And yet, this happened.

How low can a person go?

Kavanaugh was confirmed despite the allegations.

And, he also opposes our right to choose. Talk about a kick in the teeth.

For the writer, at least, this Twitter thread facilitated understanding.

It's a good thing he took the time to write all of this out!

And several of them were able to add a few things to the conversation.

There are some cases where a kick is called for.

Just because you like someone doesn’t mean harassment is okay!

Many can relate to the thread.

Ideally, a lot of people should be able to empathize with these points, and with each other.

But there’s always the few that still will not understand it, even if many others do.

Hopefully, we're able to change the narrative in the coming years.

Empathy is an important thing.

And seeing a lack of empathy is, frankly, disheartening.

One Twitter user brought up another point to add to the thread.

@JuliusGoat What if, in most cultures, having un-kicked nuts was the greatest sign of virtue and your future prospe… https://t.co/l8z1dTXxad
— Leanne (@Leanne)1539130202.0

Unfortunately, this is a message that many young women receive.

Imagine what you would do in this scenario.

Would certain things in life still be easy?

At least the point can get across!

Let's hope this analogy resonates with others!

All in all, a pretty outstanding thread.

No matter who you are, you can find a way to relate to this well-written thread! Was this thread effective? Share it with your friends!