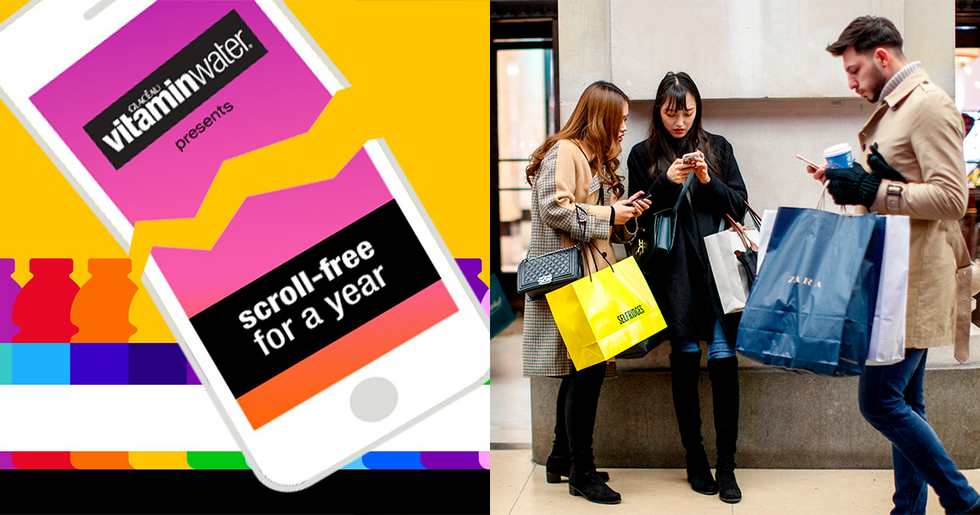 Face it, smartphone addiction is real. We've all been there. Your text message sound goes "ding!" and your brain lights up with dopamine. You grab your phone, read your text, and soon after, without even realizing it, you're mindlessly scrolling through Instagram, eyes glazed over, barely even registering the brightly-colored squares floating before your beleaguered eyes.

Personally, I call this the "scroll hole." It's for real, and it's ugly. It rears its head when you say you're going to bed at 10 pm but suddenly it's 1 am and you've been reading the Wikipedia page for a side character on Charmed. Or when your alarm goes off in the morning and you decide to ease yourself into the day by watching the previous night's Snaps. It's a slippery slope, and most of us don't really want to confront the reality of being addicted to our phones... because then we'd have to actually do something about it.

Well, lucky for you, someone else has decided to do something about it.

50 Cent's favorite beverage brand, Vitaminwater (owned by parent company Coca-Cola), is offering one lucky person $100,000 to put down their smartphone for a whole year.

Well, it's a little harder than it sounds. According to Glaceau Vitaminwater, first you need to: You can apply on Twitter or Instagram using the hashtags #nophoneforayear and #contest, Tell Vitaminwater why you need a break from your smartphone and what you'd do with your free time. You have until 11:59 p.m. ET on Jan. 8, 2019, to enter.

Vitaminwater will pick one entry by Jan. 22, 2019. If selected, you'll be contacted via the social media account you used to enter.

The potential winner will be provided with a "1996-era cellular telephone" and accompanying phone plan to use for one year. The winner must sign a contract committing to no smartphone usage for the duration of the contest. If Vitaminwater believes they have adhered to the rules at the end of the year, the winner will then be rewarded with $100,000.

You can still use a laptop because, duh, you probably have a job. But the catch is that you actually (according to the rules!) cannot even touch a smartphone for the duration of the year. Way harsh, Tai. But there's a middle ground...

If you can't survive the full 12 months, but you CAN make it to 6, you'll still get something.

According to Fox2now.com, Vitaminwater intends to use a lie-detector test to find out if contestants were as truthful as they say they were.

At this point, this contest sounds more like a bad episode of Law & Order but whatever, we're already here. So, here's the real question: did anyone enter yet?

@vitaminwater #nophoneforayear #contest I would spend my time with my daughter and would actually to be able to fin… https://t.co/qzHAhmjhHz
— Sofia (@Sofia)1544669771.0

Sofia wants the time to spend studying and spending time with family, which are noble pursuits indeed.

Hannah here believes her "whole life" revolves around her phone.

I need a break from my phone because im addicted my whole life revolves around my phone. If I did not have my phone… https://t.co/3llAKF6GgJ
— Hannah McMurray (@Hannah McMurray)1544716160.0

She wants to notice the world. I don't blame her!

This grandma just wants her danged grandkids to stop playing Candy Crush on her phone.

We feel you, Mawmaw! Tell those kids you don't even HAVE a phone.

Chantel has decided to tell everyone her marriage has gotten weak. Bold move, but I feel you. My husband hates when I'm on my phone. To be fair, it's usually because I'm looking at shirtless pictures of Antoni from Queer Eye though.

This challenge would be a huge benefit for my family. My marriage has gotten weak I’m addicted to social media and… https://t.co/0FLBZTRtK9
— Chantel Gibson (@Chantel Gibson)1544731417.0

We're pulling for you, Chantel!

Maddie is up for the challenge because her wife left her for an Insta model.

Deb just wants to enjoy the world in her kayak.

That dog looks like he would be happy to never see a phone again too. So... what do you think? Could you live without your phone for a year?