This Waiter Swapped out a Pregnant Customer's Alcoholic Drinks with Virgin Cocktails, but Now The Internet Is Furious | 22 Words 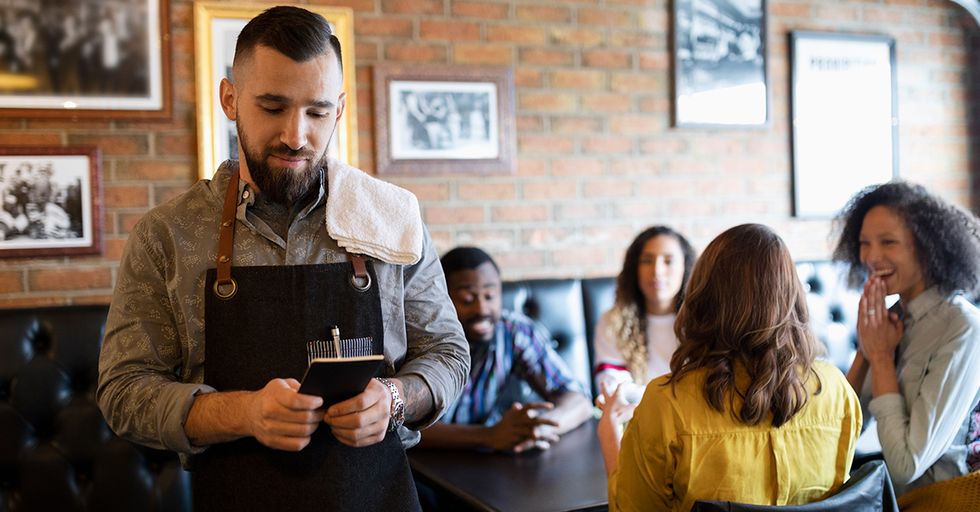 This Waiter Swapped out a Pregnant Customer's Alcoholic Drinks with Virgin Cocktails, but Now The Internet Is Furious

Have you ever made a decision and done something that at the moment felt right, but later you can't stop stressing about whether you were actually in the wrong?

Have you ever asked yourself the question, "Wait...am I the jerk in this situation?"

Well, you're not alone. In fact, there's an entire subreddit called Am I The A**hole? where folks post situations where people then vote to determine if they were, indeed, an a-hole in that situation. It's a fascinating wormhole that is easy to go down, especially if you've ever asked yourself that question.

In the community details section of the subreddit, it says that AITA is a catharsis for the frustrated moral philosopher in all of us, and a place to finally find out if you were wrong in an argument that's been bothering you. Tell us about any non-violent conflict you have experienced; give us both sides of the story, and find out if you're right, or you're the a**hole.

It's an extremely popular subreddit.

It has over a million subscribers, and celebs like Chrissy Teigen read it for hours. It's truly addicting.

But one story, in particular, is making the Internet rounds...

It begins with a waiter who asked the question, "AITA (Am I the a**hole) for serving a pregnant woman a non-alcoholic cocktail?" There are definitely some red flags going up immediately, just by reading that question.

As can be predicted, many of these posts have a very heated comment section.

But this story might just be the most divisive of the bunch. Let's dive into it, shall we?

It starts out with four women coming into the restaurant where this waiter works. "I have waited tables for the last three years. During my shift last night, a group of four women in their late 20s came in. They were a pleasure to have as customers. They ordered four of our house cocktails to start with and then went over the menu for their entrees."

Here's where things took a turn... "When I was on my way back to their booth with the drinks on a tray, I walked by the back side and overheard one of them talking about how she was 14 weeks along. When I rounded back, they were talking about the same topic and it was clear to me that she was pregnant."

The waiter was alarmed that an apparenty pregnant woman was ordering alcoholic beverages.

"I figured her having one drink wasn't a big deal. They ordered their entrees and I went off to handle other tables."

But then, the lady ordered more drinks.

"About five minutes later, they called me over again and asked for another round. At this point, I started getting concerned, but I took the order and cheerfully said I'd be right back."

The waiter had a plan...

"This time, I went to the bartender, and asked him to make one of them a virgin cocktail. He was confused but since he's a good friend of mine, I told him to just trust me."

Everything seemed to be going fine...

The friends and the "pregnant" lady were having a good time, and she didn't seem to notice that her drinks were sans-alcohol.

But then the check came...

"The problem came when I took them their check, and they asked to split the bill at the register. When Mrs. Pregnant Woman got to the counter, I saw her cocktails were marked with (virgin). My bartender had edited each in the system for inventory."

Yep, uh-oh is right. The waiter just hoped that the lady wouldn't notice. "It was too late for me to edit them back, so I just had her pay, hoping that she wouldn't look at the receipt. They all thanked me and left, leaving a generous tip in the process."

But then the lady came back inside the restaurant.

"Several minutes later Mrs. Pregnant Woman came back and asked what (virgin) on the receipt meant. I fessed up that it meant non-alcoholic." Is anyone else incredibly anxious right now? Oof.

The lady was confused at first.

"She blank stared me for a few seconds and then asked if she had ordered a non-alcoholic cocktail. I said no, but told her that I assumed she wanted one seeing as she was pregnant." Something tells me she didn't take that well...

The lady asked that the waiter return her part of the tip.

The waiter did just that, and then the lady spoke to the waiter's manager. "My manager took me into her office and literally shrieked at me until hoarse."

The waiter stood their ground...

"I stood my ground and told her that I'm not going to be responsible for FAS. She told me that she was taking me off the calendar until she decided what to do with me." Yikes. That's not good.

"She also informed me that I could get the restaurant in serious trouble for discrimination, and upon examination of my state's laws, she is correct." Gulp.

The waiter goes on to say that the rest of the restaurant staff is against them.

"The entire staff at the restaurant is against me and I think that I'm going to call in and tell my manager that I quit, but I still feel in the right here."

Then the internet began to weigh in on the situation.

And people had strong feelings about this story.

Many people definitely thought this waiter was in the wrong.

YTA [You're The A**hole]. If you really didn’t feel comfortable serving her, you should have told your manager, not made a bad decision on your own. - expresidentmasks

Some people pointed out that there was no way the waiter could confirm that the woman was actually pregnant.

Unless you saw the woman pee on a pregnancy test, you had no way of knowing for sure that she was pregnant. She could have been talking about someone else, a past pregnancy, or she could be planning to terminate the pregnancy. That wasn’t your call to make. - NUTmeSHELL

Others just advised the waiter that they should've minded their own business.

You don’t get to decide what another person of legal age decides to consume. Mind your own business. - TrickyEducationKY

Some pointed out that the server should've just refused to serve if they were feeling worried.

You would not be the a**hole if you had told her what you heard and said you didn't feel comfortable serving her alcohol. You also could've cut them all off once you saw that they were intoxicated. That would be actually living up to your convictions and dealing with the consequences. - Fake_Eleanor

Some people pointed out the behavior of the waiter seemed a bit shady.

Mixed drinks are expensive and the fact that you were going to change the check is also really shitty. - king_kong123

Others agreed that overall, it's just not okay to mess with something that someone is going to consume.

Others pointed out that the woman was likely not even pregnant.

YTA and I’d put money on the woman not even being pregnant. It would probably be quite hard to find three other people who are so nonchalant about a woman in her second trimester knocking back drinks. - Lunarp00

It does seem like the waiter just didn't have all of the facts.

Their intentions may have been good, but they clearly acted out of impulse.

One person pointed out that the waiter's actions are grounds for a lawsuit.

YTA. This was actually one of the things I learned in TIPS (bartending) training. Pregnancy is a considered a disability under the ADA and you opened yourself and the restaurant up for a lawsuit. While you don't agree with her decision, it is her decision. I don't think it was your place to decide for her. - serenity561

At the end of the day, the waiter just didn't have enough information to act on.

You CANNOT f*ck with peoples orders like that. Did she tell you directly that she was pregnant? - budbrat

There were almost 3,000 comments on this thread.

People were (and still are) fired up. While there were some who voted "NTA (Not The A**hole)" the majority voted that yes, the waiter was the a-hole.

Most of the comments pointed out that the waiter didn't know enough information to act the way they did.

Do you think that the waiter was being an a-hole? You can read the entire thread (and all of the comments) here.