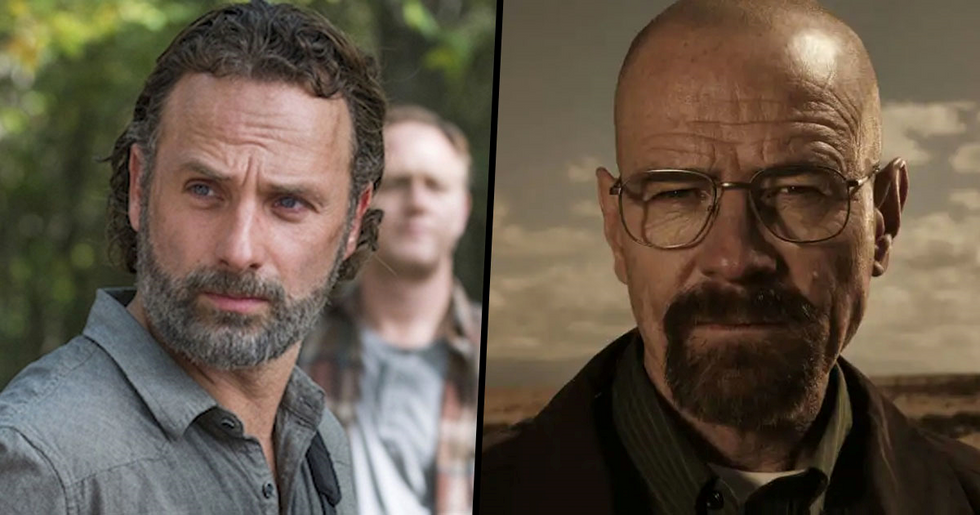 There has been speculation for many years that The Walking Dead and Breaking Bad are in some way connected. Eagle-eyed fans of the shows have spotted several similarities over the years that indicate that the shows are entwined somehow.

Some have even suggested that The Walking Dead is the sequel to Breaking Bad. I know, our minds were blown too!

And now finally, their theories have been given some concrete support from one of the creators of The Walking Dead who has confirmed an undeniable link between the two shows.

Let's take a look at what this link is and other thrilling theories from fanatical fans.

The world was introduced to Walter White, a seemingly normal 50-year-old chemistry teacher. But not for long. We see Walt be diagnosed with terminal lung cancer and turn to making meth with the hope to be able to support his family after he has gone.

What we love most about Walt's character is his ability to adapt his personality and hide his emotions to deal with every increasingly dangerous situation he finds himself in. And of course the fact that he is totally badass.

Jesse Pinkman, played by Aaron Paul, was Walt's side kick throughout the series.

Jesse was actually due to be killed off at the end of the first season but Aaron's stellar performance meant they kept him on. We loved Jesse as his character developed from sneaky drug dealer to someone who actually had a moral compass.

And then they started cooking meth together and one thing went wrong after another.

From rival drug gangs to addict girlfriends and angry wives, Walt and Jesse's journey to financial security was not a smooth one. But we loved being along for the ride.

And before we knew it, it was all over.

Breaking Bad ended in September 2013 with many fans crying out for more seasons. Vince Gilligan, the show's creator, explained how he wanted the show to end on a high and leave the audience wanting more. Well he definitely succeeded with that.

While all this was going on, The Walking Dead hit our screens in October 2010.

Set in a post-apocalyptic society, Sheriff Rick Grimes wakes from a coma to find the world has been taken over by walkers (that's zombies to those not in the know.)

Although this show will be coming to an end too no doubt.

Recent reports claim that The Walking Dead has been renewed for Season 10 and we are hoping and praying that they are correct.

So are you Team Walt or Team Rick?

Although we absolutely adore both these shows, you have to have a favourite protagonist? So do you favour the manic and super scary Walt or the family man turned hard-man Rick?

Conspiracy theories about these two shows have been rife for years.

Hardcore fans have been speculating since as far back as 2013 that The Walking Dead and Breaking Bad have too many similarities not to be connected.

And finally in 2019, a showrunner from The Walking Dead confirmed that there is a true connection.

Could we be any more excited about this? Did the show's creators always plan it this way or was it a natural progression? Ahh, too many questions.

This catchy song is the theme tune for Walt's alter ego Heisenberg and is often played when he really means business. This song also featured in the 11th episode of season 3 of Fear The Walking Dead when Madison and Walker were walking through the market. Dave Erikson, Fear The Walking Dead showrunner confirmed that this was "a gentle nod of admiration to Vince Gilligan", Breaking Bad creator.

The Red Dodge Challenger appears in both shows.

Another similarity that fans picked up on was that the Red Dodge Challenger that Walt bought for Walt Jr. also featured in the second episode of The Walking Dead. Even more crazy was the fact that a man named Glen featured in both these episodes with this car. A coincidence? We think not.

When Gus gets blown up in the nursing home, we see him emerge from the rubble with a massive hole in his head. Would he still be able to walk with an injury like this? We doubt it. More likely this is yet another connection with The Walking Dead. Gus is literally a zombie.

Did Breaking Bad cause the zombie apocalypse in The Walking Dead?

Remember Walt's Blue Sky meth that was insanely strong and was starting to be sold across the whole of Europe by the end of the show? Well, fans have speculated that a global demand for this potent drug led to a leak during the cooking stage which in turn created a worldwide epidemic.

Is Negan a reincarnated Walter?

One of our favourite, if not most farfetched, conspiracy theories is that Walt somehow survived both the gunshot wounds and the cancer in order to become Negan in The Walking Dead. Do you see the uncanny resemblance? No, neither do we.

Could the hillbilly meth addicts have fought off a few zombies before heading to Albuquerque?

In season 2 of Breaking Bad two meth addicts steal an ATM and try to break it open for cash to fund their habit. Viewers have noticed that their many wounds and bruises seem a little extreme even for meth heads. Perhaps they had to fend off a few zombies before they encountered Jesse in the hallway?

Were Daryl and his brother Merle drug dealers for Gus Fring?

Obviously we are aware that Daryl and Merle did not have great childhoods and that they were moved from place to place. Maybe they came across Gus' drug ring and jumped at the chance for a quick way to make money and score some easy drugs? It could have happened.

Taking it one step further.

Daryl described Merle's drug dealer as a 'janky little white guy' who is known to say 'I'm going to kill you, bitch.' Remind you of anyone? Maybe before they found Gus, the brothers used to score from Jesse back in his early drug dealing days before he met Walt.

If ever there was doubt that these two shows are connected, this crossover of specific drugs should put any cynics minds to rest. Walt's instantly recognisable meth was featured in the second season of The Walking Dead in the Bloodletting episode. How is this possible?

You remember Gale, the slightly odd brain to Gus' brawn (or craziness.) Do you also remember that weird coffee machine that he made? Well, once Gale was killed and his coffee machine disappeared with him, it then magically appeared in Milton's lab. Strange, no?

Both series are shown by AMC.

Not a massive coincidence as AMC is a huge network with many successful shows but this could make the creators more likely to mess with the fans by throwing in the odd reference from one show into another. But would they really be that cruel?

Some fans are believers.

After extensive YouTube surfing I've come to the conclusion The Walking Dead is a sequel to Breaking Bad and Walter White is alive.
— Sean Smith (@Sean Smith)1478331029.0

There is no doubt in their minds that The Walking Dead is the sequel to Breaking Bad. But is this just wishful thinking on their part and a strong desire for Walt to still be alive?

Of course the potent meth caused the zombie apocalypse. Science says so and science is never wrong.

Others not so much.

We call bullsh*t say some fans. They are both great shows in their own right and any overlapping details or references are just the creators trying to storm up some extra media interest. Cynical much?

You know how some people think Breaking Bad is a sequel to Malcolm in the Middle? And others also think Breaking ba… https://t.co/KJPoK1YnNQ
— Rizatch (@Rizatch)1533052599.0

Throw Better Call Saul into the mix and sh*t gets complicated.

The Walking Dead is actually a sequel to Breaking Bad while Better Call Saul is the prequel. That's kinda cool.
— Kristian (@Kristian)1477699199.0

Ooh another amazing series Better Call Saul. Is it a prequel or a spin-off series in its own right? We don't know and we are not actually sure if we care. We loved the background story to how con-man Jimmy McGill became criminal for hire Saul Goodman.

Surely this is just semantics.

Prequels, sequels, spin-offs. Who cares? It's all just great entertainment with plenty to discuss and dissect over and over again. And that's what we will do. Care to join us?

Our minds after reading this.

Could there actually be anything else to shock us about these two sensationally gripping shows?

Bryan Cranston has recently revealed that he wouldn't say no to a Breaking Bad movie. Please Hollywood make this movie now!