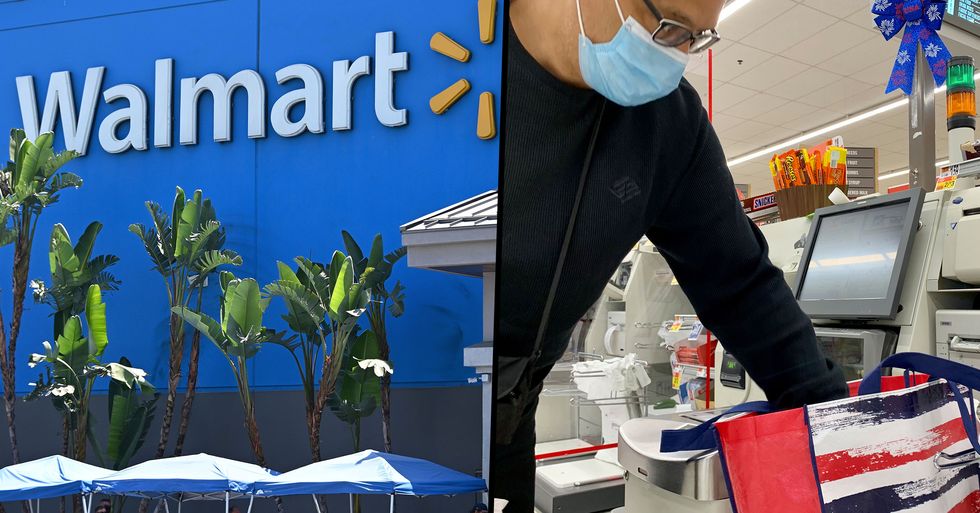 Walmart Are Testing Having Self-Checkout Lanes Only and No Cashiers

Walmart has announced that they will be trialing out a new system in their stores, and it's got introverts everywhere jumping for joy...

Although most customers might have something a little different to say about it all...

We have all known and loved Walmart since the 1960s.

Originally founded in 1945 by businessman and former J. C. Penney employee Sam Walton, the primary focus was selling products at low prices to get higher-volume sales at a lower profit margin, portraying it as a crusade for the consumer.

After several name and brand changes...

The first-ever Walmart Discount City store was opened in 1962 in Rogers, Arkansas.

Walmart U.S. is now the company's largest division, with a total of 4,753 stores now spread out across the country.

Walmart continues to be one of our country's favorite supermarkets...

And their low prices are hard to beat.

But the thing that is equally as important as the low prices...

The Walmart employees, of course.

Over the years, the supermarket chain has welcomed millions of employees...

And many of these hard-working employees have spent the majority of their working lives working for the supermarket.

But this year has perhaps been one of the hardest times for supermarket employees.

The coronavirus pandemic sent the entire world into a frenzy when it first broke out in January and since then, many parts have been living in lockdown.

Of course, our health care workers were the ones who were stretched to their limits the most...

But supermarket workers were also feeling the pressure of keeping every single kitchen in America stocked up with food and supplies.

Especially when the pandemic first hit...

Shelves were emptied in a panic and the poor supermarket workers were the once feeling the heat from anxious shoppers.

And as for Walmart?

Customers have been flocking through its doors for the last few months throughout the pandemic in a desperate bid to stock-pile on essentials.

Walmart employees have been working harder than ever...

And so much overtime has been pulled in order to keep things running smoothly in all stores across the country.

Now things are finally starting to calm down...

Walmart has decided to try something out that could potentially help employees deal with a lot less stress.

Walmart has decided to test out having one of their stores go cashier-less.

Just imagine the chaos. There's a reason cashiers are a thing, and the general public is one of them.

I guarantee there will be a lot of opposition to Walmart's new trial.

That poor self-checkout machine will be in for a lot of verbal abuse.

I can't imagine this is going to work well for the general population.

They will be trialing this new system in the Fayetteville, Arkansas store.

Which makes sense, because Walmart's headquarters are in Arkansas.

They could be rolling this new system out into all of its stores.

If all goes well that is.

There's one thing I want to know...

Will the prices go down? I mean we do have to play cashier.

Have you ever been stuck behind someone struggling to scan an item...

Chances are Walmart employees will have to stand guard at the self-checkout machines anyway.

I'm getting anxiety just thinking about the lines.

Although it would be more cost-effective for Walmart.

And not to mention, you can buy those awkward purchases that you might have otherwise avoided.

We don't know when they'll be bringing out the new system.

But the Fayetteville store will start their cashier-less trial pretty soon.

Keep scrolling to see what else Walmart employees have in store...