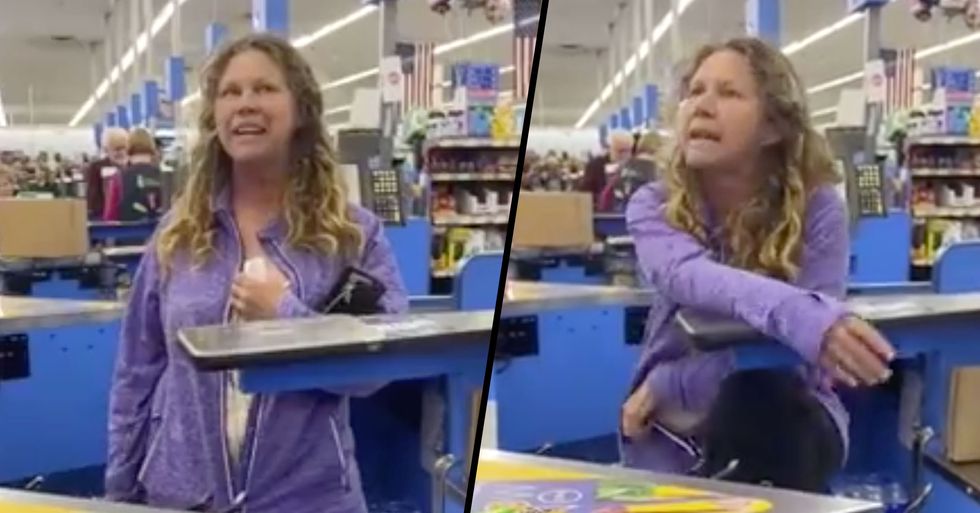 Walmart Shopper Coughs and Spits on Employees Over Billing Dispute

Way too many people around the world have been left without groceries due to the extreme stockpiling that people have been doing during this global pandemic.

This has caused tensions to run high, and one shopper recently lost their cool and took out their frustrations on Walmart employees in the worst possible way.

With the deadly virus sweeping the planet, millions have descended into mass hysteria - and have been frantically stocking up on basics such as toilet paper and dried pasta as a result.

This excessive form of shopping has caused tensions to run high.

People are feeling the strain more than ever...

And the smallest of things can now make a person snap.

Shocking footage has emerged recently from a Walmart in California.

The video shows an angry woman arguing with the person on the checkout over her total bill.

It is an extremely tense situation...

And the woman can be heard raising her voice as she checks her shopping receipt - clearly, there's something on there that she doesn't agree with.

The woman is holding up a lot of people...

She can be heard saying, "Where shall I go to pay the rest" as the store manager is seen asking her to leave so the other customers can pay for their items.

This is when things turn ugly...

She then calls the workers "dumb", asks, "you guys like working at Walmart??" and then declares that she is calling 911 to help her sort out the dispute.

Customers queueing behind her are clearly getting agitated...

And as the woman continues to raise her voice, she takes the terrifying step by spitting on the worker who moves her shopping trolley and asks her to leave the store.

She begins to swear at the unfortunate workers as they continuously ask her to step outside...

She tells one of them to "shut the f*** up" and she persists for a receipt of her canceled payment. It is truly disgusting to watch.

The woman then has the audacity to claim she was innocently coughing when the shop worker explains to 911 that she had spat at him...

"I coughed! Do you see how easy it is to get the phlegm out! It called getting the phlegm out... and that's what holds the f****** viruses!" she yells as other customers watch in disbelief.

Things then get beyond crazy...

"You think I'm just having fun being a stupid blonde? Yeah, I just decided I wanted to be born to be a stupid blonde! Yeah, like I'm the only f****** blonde here!" she yells angrily.

Her behavior is completely irrational, and it is honestly quite difficult to figure out how this whole commotion started.

The woman filming the ordeal begins to threaten the woman which seems to cause her to fall quiet, but it is currently unknown as to what happened after the footage was cut short.

And keep scrolling to learn about why Walmart employees now get temperature checks before they start work...