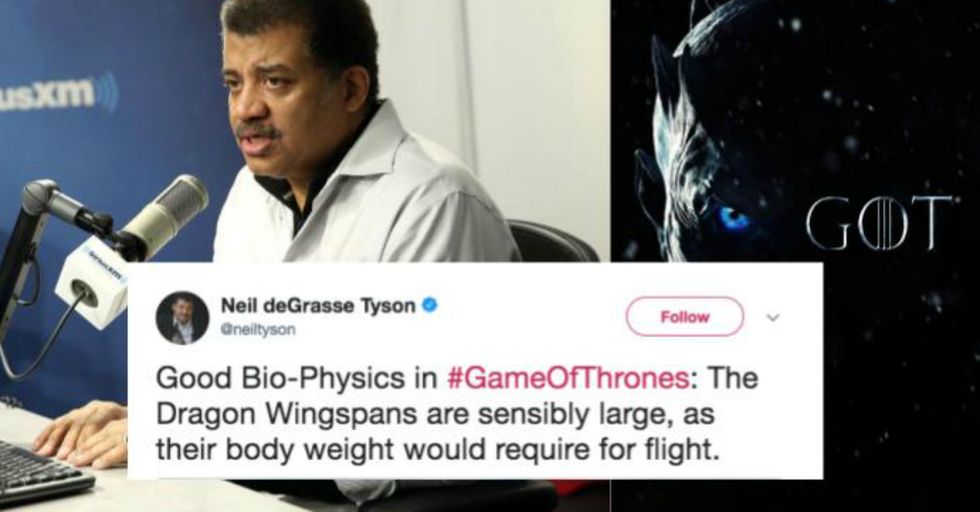 Game of Thrones is one of those shows that you will end up obsessing over. Once you start watching, it's hard to stop, and suddenly you've turned into one of those annoying people at parties who only wants to talk about GoT and convince those who haven't watched it that THEY. HAVE. TO.

One of the biggest fans of the show is none other than American astrophysicist, Neil deGrasse Tyson, who recently took to Twitter to treat us all to his fine-tuned, scientific take on the series.

So what did our beloved GoT get wrong? And what does it get very right?

For those of you who don't know, Neil deGrasse Tyson is basically the coolest guy ever.

Not only is he an insanely smart astrophysicist, but he's somehow able to explain extremely complicated concepts in a way that's both funny and understandable enough for our puny lizard brains to comprehend.

So when he decided to gift us with a few observations after watching the newest season of GoT, we listened.

They're called White Walkers, Neil. But yes, we were also under the impression that they could not swim. What's up with that? CAUTION: There are spoilers below!

First off, that whole chain-pulling part...

Apparently, those pesky White Walkers utilized very bad form when they dragged Dany's dead dragon out of the icy waters. Remember this warning whenever you find yourself trying to remove a giant fantastical creature from a lake. Keep those chains straight!

Very true. Zombies don't play by society's rules, so why should they abide by the laws of physics? They do what they want!

On a positive note, GoT creators totally nailed the dragons.

This is probably something that only Neil would have noticed (aside from maybe Bill Nye the Science Guy), but we appreciate the level of accuracy. Great job, guys!

Neil used these adorable cherubs as a basis of comparison.

See, Renaissance-era artists? This is what NOT to do. Those wings look like they could barely make a pigeon fly. Maybe if the cherubs just worked out a little...

As user @thedragonLML pointed out, it's comforting to know that Neil approves of our favorite flying beasts.

And the fact that he's taking the time out of his busy astrophysicist schedule to talk about Game of Thrones makes us love him even more. Also, his space-themed neckties are pretty awesome.

Another win for the GoT creators!

Remember all those dragons you've seen in storybooks and on Magic: The Gathering cards that have four legs along with their wings? Totally wrong! Doesn't this completely change the way you look at dragons? It sure does for us!

This next revelation is actually a bit unnerving...

It turns out, the White Walker dragon's fire is wayyyyy more powerful than that of our girl Dany's dragons. This does not bode well for next season.

Hopefully, the fact that Daenerys still has two dragons to the White Walkers' one means that they'll be OK.

But now we're concerned that he just used science to spoil the final season before it's even been released. With great power comes great responsibility, Neil.

Nevertheless, we still love this whole astrophysicist-turned-GoT-superfan thing he's currently got going on.

But next time you do this, try to bring some encouraging information about season 8. Because at this point, it seems like Westeros has got nothing on those blasted ice zombies.

Oh and BTW, is this job available?

Because seriously, we want it. Although Neil is probably the only one qualified enough to get it.