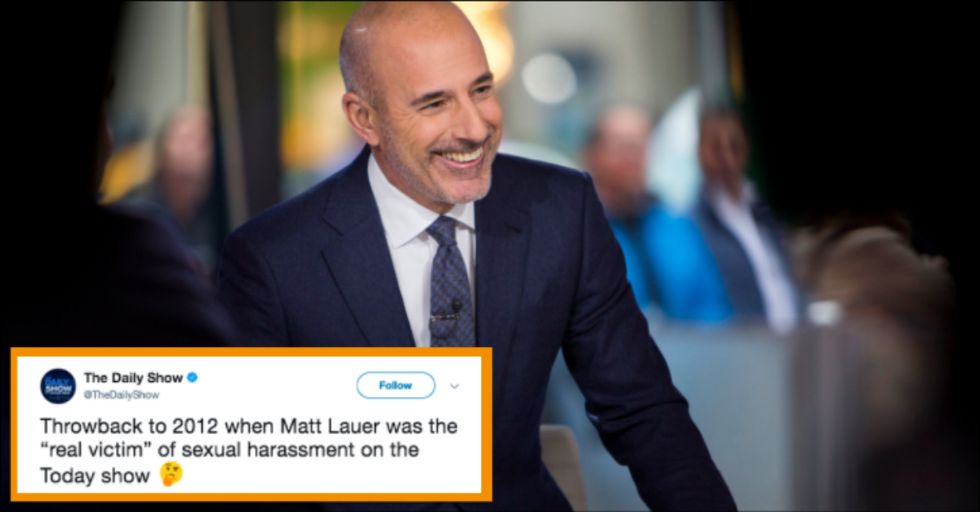 On the morning of Wednesday, November 29, morning TV changed forever. Matt Lauer was abruptly fired from his position as host of NBC's Today show — a job he'd held for nearly 20 years. The reason? Sexual misconduct. At first, few details were available. But as the day wore on, more shocking information came to light. Information such as that he once bought a sex toy for one of his colleagues, or that he reportedly had a button installed under his office desk that would automatically lock his office door from the inside.

In light of the news of Lauer's firing, The Daily Show did some digging and found one of the most bizarre clips of morning television to ever be broadcast (and that's saying something). It features none other than Matt Lauer joking about sexual harassment in the workplace. Yes, really.

The clip shared by The Daily Show was from a Today show segment in 2012.

Obviously, long before the accusations against Matt Lauer came to light. Still, the fact that it was on television at all — ever — is absolutely beyond comprehension. It's really bad.

The segment opens with Savannah Guthrie (another Today host) solemnly speaking directly to the camera.

She refers to the "incident" in question as "The Smack Heard 'Round the World." "It was on off-air moment involving two of our own, Matt Lauer and Willie Geist, and it has everyone around here talking and accusing. The whole thing was captured on surveillance cameras." She then throws it to Jeff Rossen who's waiting just outside the studio.

Rossen regularly hosts a segment on Today called "Rossen Report," wherein he acts as a sort of investigative journalist to debunks myths and offer survival tips. That's the tone he uses throughout this particular segment.

"It all happened right here. This is the door to the studio," he says, pointing around the room. He then says that Lauer has claimed that Willie Geist came through the door and "smacked him right on the tush." Yes, that's a direct quote. Yes, they really are joking about sexual harassment at work. No, we don't know why anyone thought this was a good idea.

Rossen then goes on to share surveillance footage of "the incident."

Willie Geist walks through the door and smacks Matt Lauer with some rolled up papers. No, we're still not sure why this segment exists.

They even do a recreation of the event.

Why? Why? Why? If you think that's as bad as it's going to get, you are very wrong, friend. They then go to Matt Lauer to hear his statement on what it was like to be "sexually harassed" in the workplace. You know, Matt Lauer. Who we now know has been sexually harassing women he worked with for years.

He speaks to Rossen with dramatic piano music playing in the background. Rossen says, "Some would look at this and say you did something to provoke this."

"That's impossible," Lauer replies. "I didn't do anything differently. I wasn't wearing a different cologne...This was uninitiated."

Rossen then springs a "surprise" interview on WIllie Geist (the perpetrator of the "incident").

"I didn't do it," Geist immediately says. Geist then goes on to say that he only touched Lauer's lower back. It's all terrible and ridiculous and 100 percent played for laughs and again we have to ask: WHY?!

As if the segment on its own wasn't bad enough, the Today hosts then throw it to this guy:

DUSTIN HOFFMAN. Who has also been accused of sexual misconduct this year. In retrospect, everything about these 4 minutes of television are pretty horrific. But here's the thing: This shouldn't have happened in 2012. Even before we knew about the many sexual predators who seem to have infiltrated the entertainment industry, sexual harassment in the workplace was still a completely inappropriate thing to be joking about. They all should have known better.

Here's the video in its entirety:

It's even worse when you see it in action, huh? How did this get made? And — once again — WHY DID THIS GET MADE?

It's not hard to see why a studio that OK'd a tongue-in-cheek segment like the one above could have also fostered an environment in which Lauer got away with his deplorable actions.

But that's not going to happen again. Lauer's career is effectively over. Let's just hope the rest of the entertainment industry is continuing to pay attention (and, you know, not making jokes about people who are harassed while at work).